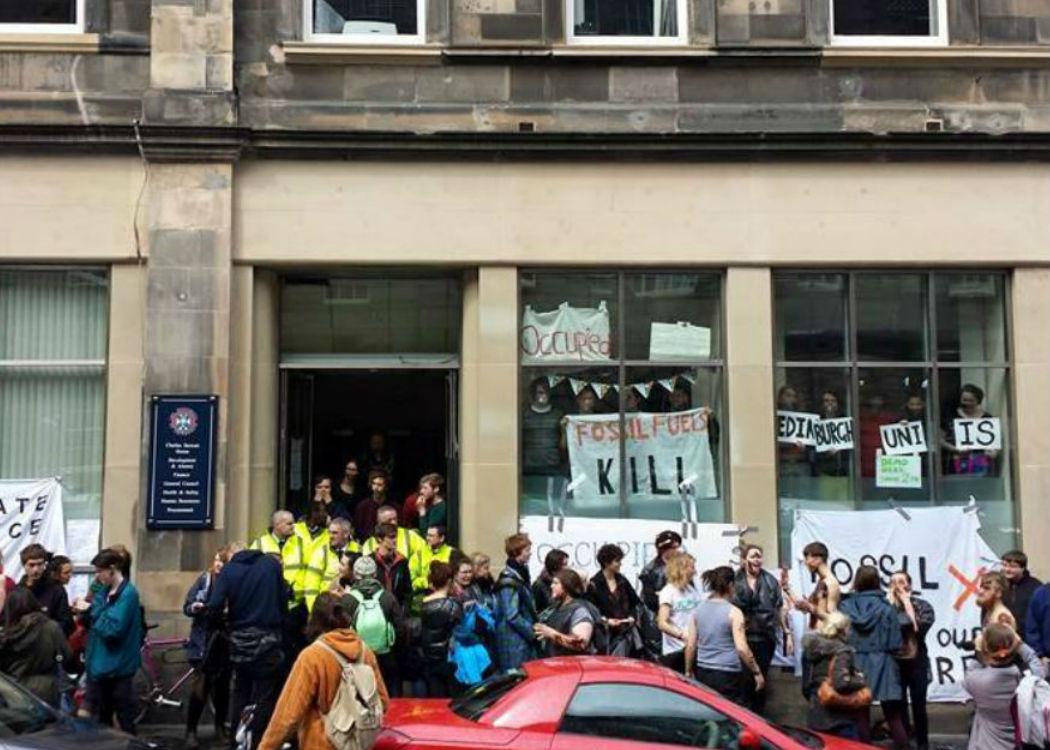 University of Edinburgh has brought in outsourced security to handle occupation

A STUDENT protest at the University of Edinburgh has escalated after footage emerged of a member of security pinning down a student by the throat.

It follows allegations from students that security staff have been making sexist and threatening ‘jokes’.

One member of the security staff is reported to have told a student: “Sleep with one eye open,” and “I’ve got no lube so I’m coming in dry.”

Students have occupied the university for over a week over the institution’s refusal to divest from fossil fuels, which they say is funding climate change.

Outsourced security has been brought in to deal with the protest with students claiming that the university is refusing to tell them which company it is.

At least 20 protesters remain inside Charles Stewart House on Chambers Street, which houses the university’s finance department, but access has now been denied with security staff blocking the entrance.

Students have not been able to receive food directly and it has had to be passed through the security staff.

Those who have visited to show support to the students include Nobel Prize winning economist Professor Graciela Chichilnisky and Scottish Green MSP’s Alison Johnstone and John Finnie.

Eric Lai, one of the occupiers inside, condemned the university’s heavy-handedness.

“We have been repeatedly told that the university supports our right to protest, but that couldn’t feel further from the truth,” he said.

“The university has posted dozens of guards to the doors, and have now taken to intimidation and violence to shut us up. It is hard to imagine a more inappropriate way to handle student protest.”

“Until they move their money out of fossil fuels, we’re going nowhere.”

Another of the occupiers, NUS Scotland vice-president of communities Kirsty Haigh, told CommonSpace: “It’s ridiculous that the university is still claiming that they support the right of peaceful protest while at the same time security are assaulting students.

“Its completely unacceptable that they’re using these tactics.”

After a review, the University of Edinburgh announced last week that it would continue to invest in fossil fuels. It claimed that it would use research activities and “responsible investment” in an attempt to get companies to reduce their emissions.

At the time of publication, the university had not responded to requests for comment.