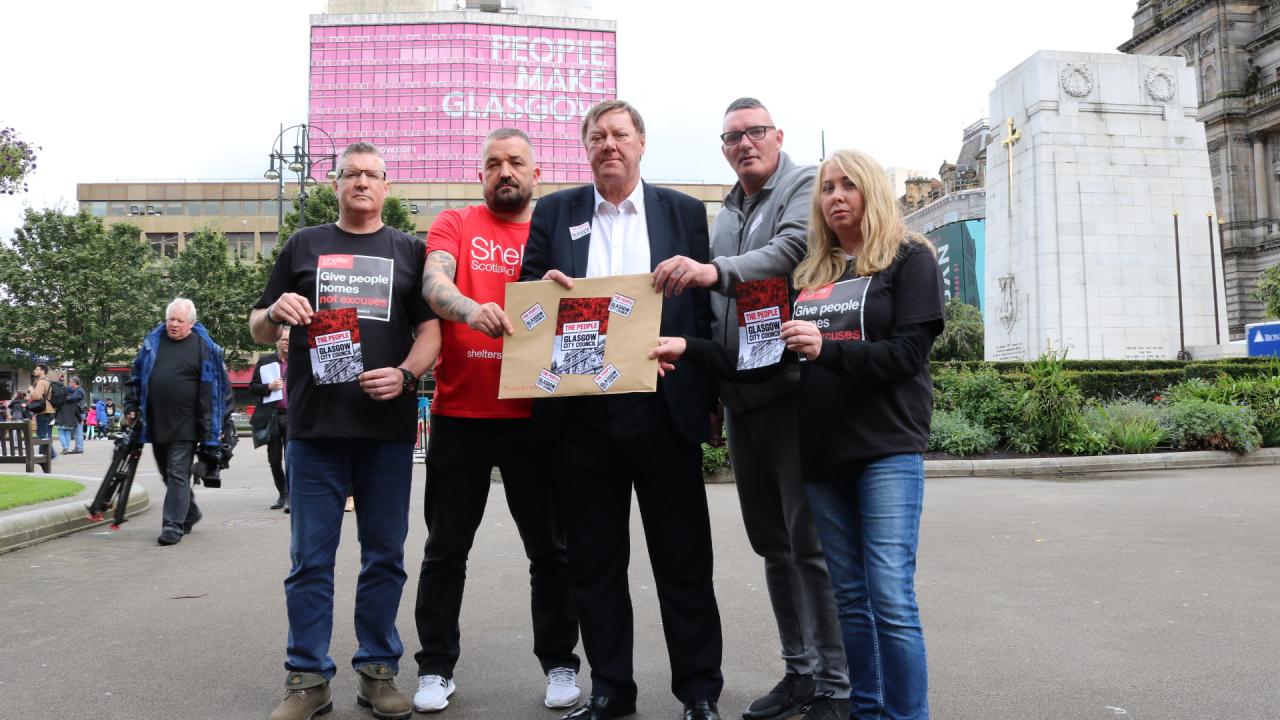 Today [19 August 2019] Shelter Scotland handed in a letter to Glasgow City Council calling on it to end the unlawful practice of denying homeless people temporary accommodation. It cites 3365 instances where homeless people were turned away without being offered a bed for the night. The letter was delivered by a delegation of people who have experienced homelessness.

Shelter Scotland is demanding that Glasgow City Council meet its duties outlined in the Housing Scotland Act (1987). Under Section 28 of the act, if a person applies to a local authority for accommodation the local authority is required to make inquiries on their behalf. Under Section 29(I)a of the same act, if they believe that person to be homeless, they are required to find them temporary accommodation until after inquiries are made.

Tam Lyon was there to hand in the letter. He was previously homeless for six years and claims that when he went to Glasgow City Council for support, he was given two bus tokens and asked to return. It wasn’t until he was assisted by Shelter Scotland’s legal team that he was provided a hotel, and subsequently a temporary flat. Speaking to Commonspace, he said:

“[Shelter’s legal team] explained that it was illegal the way that they were treating me. I said “could I have done this six months ago?’ and he said ‘you could have done this six years ago’. So for all that time, my rights had been getting taken away from me.”

Director of Shelter Scotland, Graeme Brown told CommonSpace: “Firstly, [Glasgow City Council] refuse to acknowledge that they have a problem. Secondly, they say that they’re taking action to do something about it. The figures themselves show that they have not been taking effective action, people are still being turned away and denied their statutory rights… It’s time to take action.”

A Glasgow City Council spokesman said: “It is untrue to state that 47 people died on the streets of Glasgow in a year, and Shelter know it. Their own letter also accepts that there may have been over reporting in Glasgow which demonstrates they know their accusation of gatekeeping is also untrue.

“As they are well aware, there are significant pressures on our homelessness accommodation service and we are working with the Scottish Housing Regulator and partners in the third and housing sectors to tackle these challenges.

“Rather than raising money for court action – it would be helpful if Shelter worked constructively with us, to tackle the pressing issue of homelessness. We share a common aim and threats of legal action are an unhelpful distraction to this crucial work.”

Shelter Scotland are calling on the public to support their move to #StandUpForJustice by donating to the crowdfund campaign, and signing the petition telling Glasgow City Council to stop breaking the law.

The issue of homelessness in Scotland will be the topic of this week’s The CommonSpace Show – out this Friday.

Support CommonSpace to carry on reporting on Scotland’s big issues