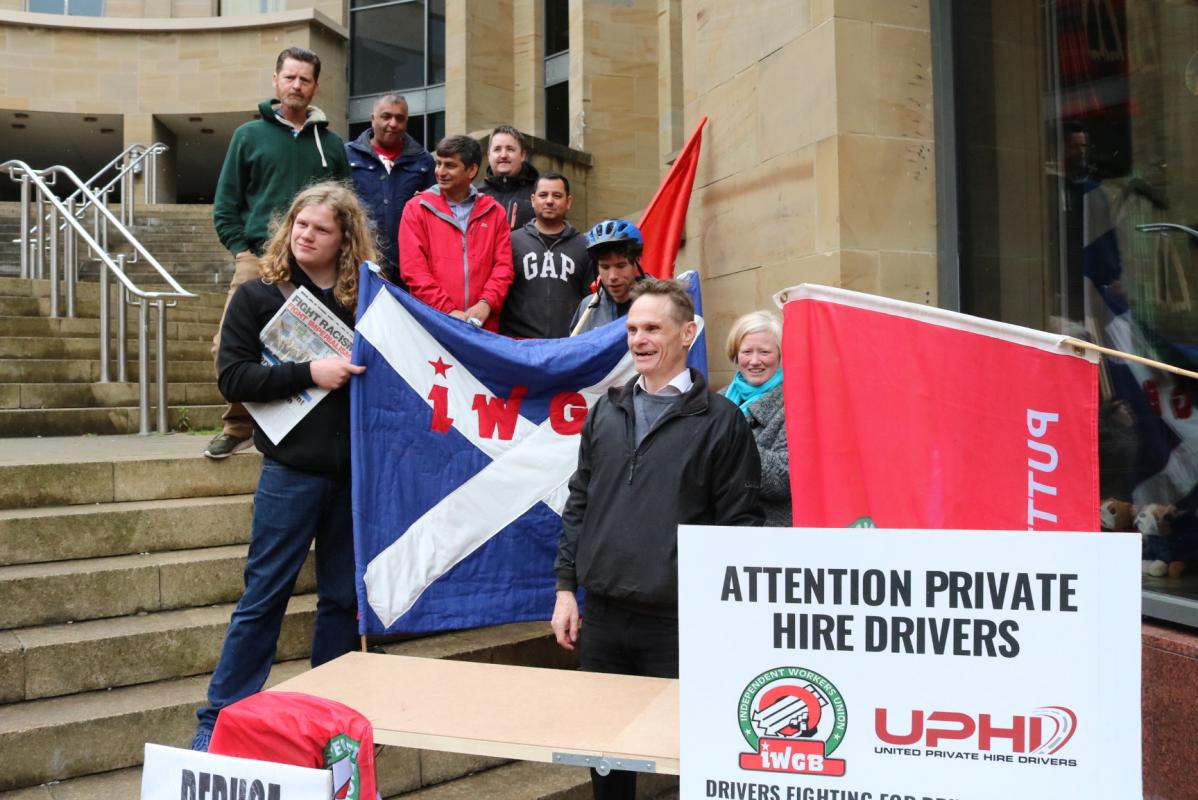 Uber drivers in the United Private Hire Drivers (UPHD) branch of the Independent Workers Union of Great Britainn (IWGB) have been on strike in Glasgow, London, Birmingham, and Nottingham ahead of the company’s stock market launch

Drivers logged off the app, and encouraged the public to do the same in protest of Uber’s Initial public offering (IPO), which will value the company at tens of billions of dollars and lead to massive payouts for investors, including Jeff Bezos, Amazon founder and the world’s richest man. Meanwhile drivers regularly work over 60 hours – just to make ends meet.

The drivers are demanding:

Striking drivers and supporters gathering on Buchanan streets in protest. Speaking to CommonSpace Barry said he’d only been an Uber driver for 3 months – previously he was working for a traditional taxi company: “Uber sold the idea of flexibility and the chance to earn even more. I saw a brighter future so I invested in a new car. Now I’m here I can see that the grass isn’t always greener. I don’t see my children, don’t see my family. They gave us all gym membership, but who has the time to go?”

Ramnick has been with Uber for three years told CommonSpace that as the minimum, one mile fare was only £2.25, he had to work around 70 hours a week just to make enough to live on. He told the story of a friend whose account was deactivated because of one, unsubstaniated complaint. It took 17 days to get his account up and running again. This loss of earnings can have disasterous consquences for drivers.

Also at the protest was a Dr Gregoris Ioannou, a sociologist at the University of Glasgow carrying out research into precarious labour in the UK and abroad. He highlighted the risk of normalising these types of precarious working conditions:

“Precarious work is expanding and is constituting a big issue, not only for the people involved with it ,but more generally in society. There are issues around tax, insurance, pensions health – a series of repercussions that come with this kind of work. The other significant trend is that people get used to this. They danger is that they start to internalise the situation, thinking it is normal to work without rights, low pay, which could have longer term impacts on the world of work over the next decade.”