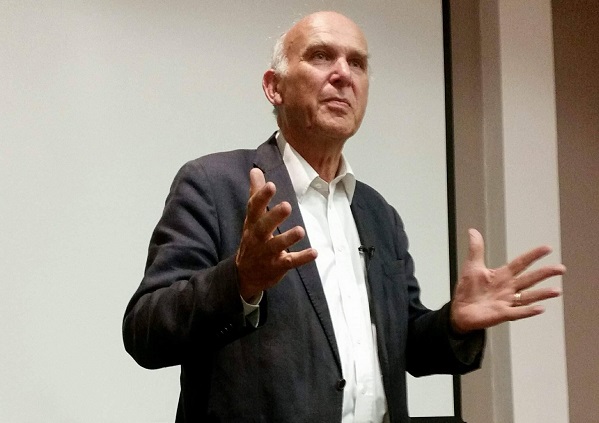 The former business secretary explored a range of issues the UK is likely to face in the next few years, reports Eóghan Macmillan

LIBERAL DEMOCRAT leader Vince Cable was in Perth recently to talk about potential hurdles in the Brexit process, along with scenarios that could see it halted entirely.

In a talk called “Exit from Brexit”, Cable spoke to a room-filling audience gathered by local campaign group Perth for Europe in the theatre of Perth Museum and Art Gallery on Saturday 9 September, to offer possibilities and strategies for rethinking Brexit and remaining in the EU.

Cable held the position of secretary for business, innovation and skills in the coalition government of 2010-15 and has a background in economics, graduating from the University of Glasgow with a PhD focusing on economic integration and industrialisation in developing nations.

Divided into three sections – addressing the questions “Is Brexit inevitable?”, “Do we know where it’s going yet?”, and “What can we do about it?” – the talk looked primarily at how circumstances may change over the next two years, with several key points such as the status of UK and EU nationals and the Brexit “divorce bill” highlighted as critical to the ongoing negotiations.

Discussing the potential impact of economic factors on whether Brexit is followed through, Cable noted that the pulling out of one or two “totemic” companies, such as Airbus or General Motors, may have more of an effect on the public psychology – and thereby attitudes towards Brexit – than a gradual economic decline.

Also noted was the danger of disruption to medical supplies such as blood products, the standards of which are “maintained by very complex European-negotiated processes”.

In the subsequent question and answer session, Cable also addressed questions of what stages Brexit will need to go through in the UK Parliament, noting that “the government has said that parliament can vote on the outcome – we’re not quite sure we believe them, and we’re not sure what form that will take”.

Cable discussed the possibility of Holyrood withholding its consent from certain Brexit clauses that need to be “devolution compatible”, saying: “I don’t expect the Scottish Government to be helpful, for very good reason: why should they?”

“I don’t expect the Scottish Government to be helpful, for very good reason: why should they?” Vince Cable

On the topic of the reports into immigration’s effects, or lack thereof, on wages, which are suggested to have been supressed by the Home Office during Theresa May’s tenure, the former business secretary said that he had “written to Theresa May and said ‘Look, it’s all sitting in my old department – bring it out, publish it, let’s see what the facts are’.”

Chris Collins of Perth for Europe said that the talk “showed that the many different facets of Brexit pose very serious questions for the man and woman on the street. And while the answers may not be immediate, the worries they create are very real indeed.”

Perth for Europe is a pro-EU organisation based in Perth and the surrounding area, affiliated with both the European Movement in Scotland and Britain for Europe.

Earlier this year it hosted a talk by former ECJ judge Sir David Edward, who said that the depth of the UK Government’s ignorance on Brexit was “astounding”. Anyone interested in joining Perth for Europe can contact the group through perth4europe@gmail.com, and follow its activities on Facebook and Twitter.