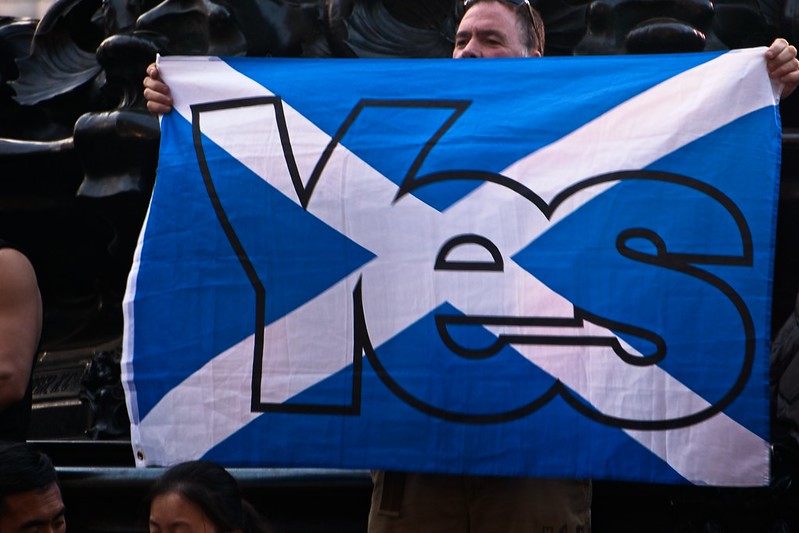 The First Minister said Boris Johnson has “no mandate whatsoever” to take Scotland out of the EU.

NICOLA STURGEON has announced plans to make the legal and political case for a second independence referendum in Edinburgh today [13 December], in an address aimed at Prime Minister following yesterday’s General Election.

The first minister said she accepted “regretfully” that Boris Johnson had a mandate for Brexit in England, but insisted the SNP landslide in Scotland meant he had no mandate to remove Scotland from the European Union.

Speaking at a press conference in the capital, Sturgeon said: “Westminster has ignored people in Scotland for three years. Last night the people of Scotland said – enough.

“It is time for Boris Johnson to start listening.

“I accept – regretfully – that he has a mandate for Brexit in England. But he has no mandate whatsoever to take Scotland out of the EU.

“If he presses ahead he will drive a coach and horses through the very idea that is supposed to underpin the UK – the idea that this union is a partnership of equal nations,”

The SNP secured 47 seats in the General Election, up 10 from 2017 with incumbent SNPs also seeing significant increases in their vote share across Scotland.

With Johnson previously indicating he would not grant a second referendum and little sign he will back down, the SNP have been under pressure to explain how they try to secure a second vote.

Emphasising the mandate she says the SNP has secured at successive elections since 2015 to give the Scottish Parliament the power to call a vote, Sturgeon laid out a strategy for the weeks ahead.

Sturgeon continued: “Given the verdict of the people of Scotland last night, the Scottish Government will next week publish the detailed democratic case for a transfer of power to enable a referendum to be put beyond legal challenge,” she said, adding: “So to the Prime Minister let me be clear.

“This is not simply a demand that I or the SNP are making. It is the right of the people of Scotland – and you as the leader of a defeated party in Scotland have no right to stand in the way.

“In an independent Scotland we will always get the governments we vote for. We will have full control of the powers and levers needed to build a truly fair and more prosperous country. We can take our place as an equal partner with our closest friends in the rest of the UK and across Europe.

“The people of Scotland have spoken – it is time to decide our own future.”