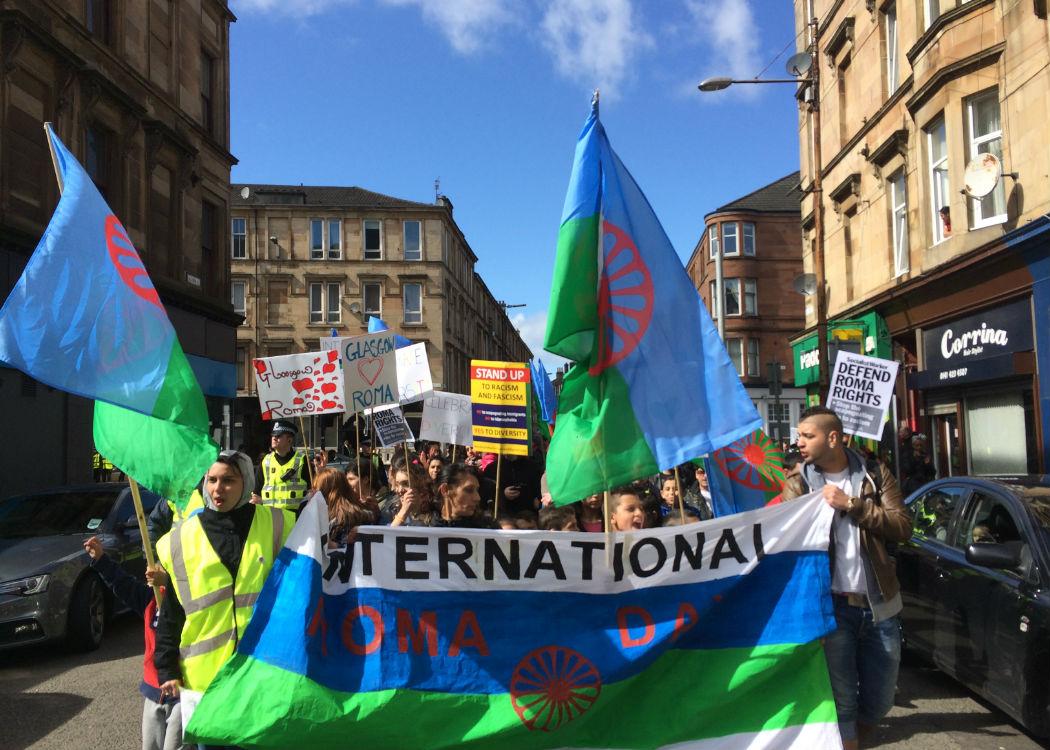 Roma community can be a “blessing, not a burden” for Glasgow, says community leader

A MESSAGE of inclusion rang out in Glasgow on Saturday as hundreds of people turned out to celebrate international Romani day.

The city’s Roma residents were joined by the wider community on a march that gathered in Govanhill Park and walked around the neighbourhood.

People held signs including “Glasgow loves Roma” and “We are all immigrants” as the march took place, accompanied by musicians playing traditional Roma music.

The Roma originate from Northern India but there is estimated to be around 10 million living in Europe, making them the continent’s largest ethnic minority group.

They have faced current, and historic, persecution – many hundreds of thousands were killed in the Nazi Holocaust.

It is thought that there about 5000 Roma people living in Glasgow, with the largest density in Govanhill.

The community has been subject to discrimination, and is often blamed for problems in the neighbourhood such as overcrowding and flytipping.

One Facebook group, “Save Govanhill” had to warn members about their behaviour after a series of racist posts were made about the community.

Illya Shterev, from the Roma Society Scotland, said that it was important to promote a positive message of inclusion and he hoped the march would help people’s understanding.

“What I see is a lot of discrimination and undermining of the Roma culture” Shterev told CommonSpace. “People don’t understand the Roma culture so we want to get people to understand our nature. Events like this help get communities together and assimilate.”

Shterev said that the negative portrayals of Roma people in the media fuels a lot of discrimination.

He said: “I know that bad publicity sells but it’s important that people get to know us a little closer. The media and government are a key drive to help us to integrate.

“The Roma community has a lot of potential but we need to be given the opportunity and given equal rights. We need proper housing. In Govanhill it is a fact that there are 20 people living in a two bedroom flat. That shouldn’t be allowed to happen. We need to make Glasgow the place that we claim it to be.

“So our goal is to see the Roma community integrate in Glasgow and be seen not as a burden but as a blessing for this country.”