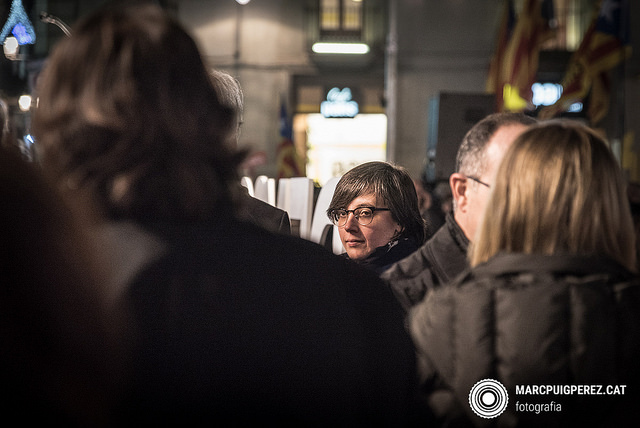 Mireia Boya will not yet be imprisoned, but remains under investigation for her part in the Catalan independence struggle

MIREIA BOYA, former Catalan MP for the anti-capitalist Popular Unity Candidacy (CUP) party, was defiant during her testimony before the Spanish Supreme Court on Wednesday.

The pro-independence politician is currently under investigation for her alleged role in a “strategic committee” to facilitate the independence of Catalonia In 2017.

At the end of her day in court, the prosecutor did not demand “precautionary measures” be applied to Boya, meaning that she will not yet be incarcerated for the duration of the investigation.

Boya is only one of the 18 pro-independence politicians and activists under investigation by Spanish authorities for their various roles in the events leading up to Catalonia’s outlawed independence referendum on 1 October, 2017, including exiled Catalan president Carles Puigdemont. Charges include sedition and rebellion.

In a press conference held on 12 February, Boya declared that she would not renounce “a single comma” of the CUP party manifesto, instead arguing defiantly: “We carried out a referendum and we won it.”

Addressing charges of rebellion, Boya said that such charges were based on Spanish police reports that are “partial and self-interested, which create a narrative that has nothing to do with reality because there was no violence.”

Controversy over the role of Spanish police during the October referendum and the violence they inflicted also grew on Wednesday, after recordings published in La Vanguardia newspaper revealed Catalan police were shocked by the aggression and brutality of their Spanish counterparts.

On the recordings – which begin shortly before 6.30am on 1 October 2017 – Catalan police can be heard expression surprise over the actions of Spanish police and Guardia Civil officers, in contrast to the non-violent efforts of protestors attempting to prevent police from shutting down polling stations.

A further six pro-Republic politicians under investigation for their role in the Catalan plebiscite are due to appear in court next week, including PDeCAT party leader, Marta Pascal, who will testify on 19 February. On 20 February, Catalan president Artur Mas wil testify in court, followed by former CUP MP Anna Gabriel on 21 February.

According to the judge overseeing the case, all six were members of the same “strategic committee” as Boya.