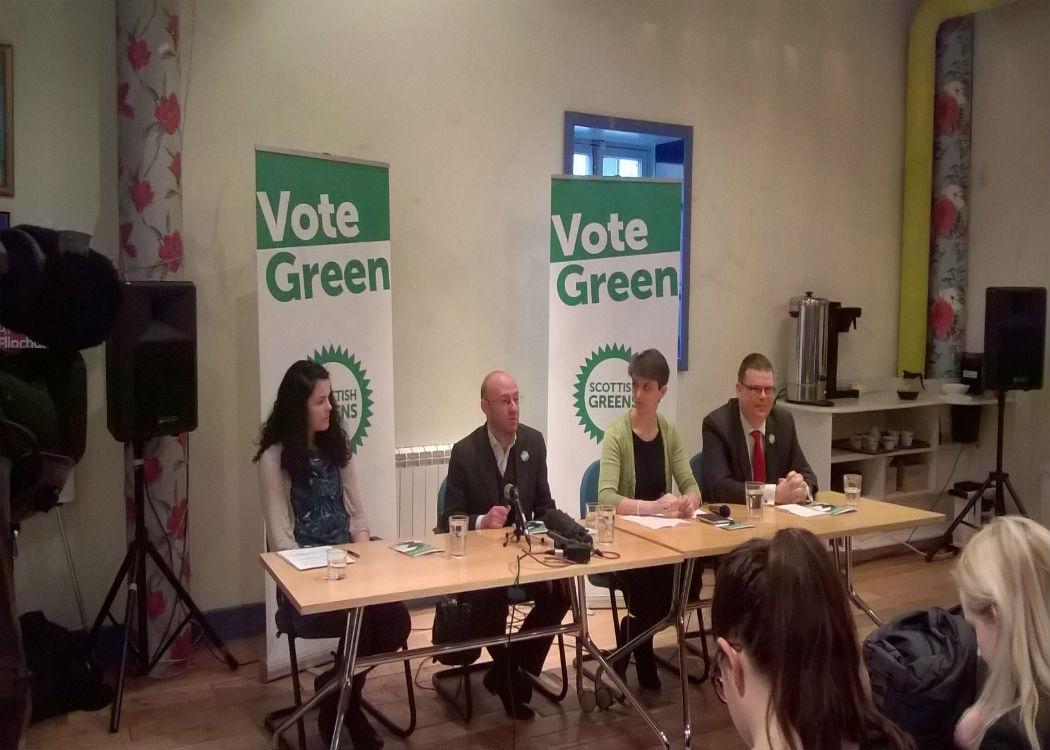 THE Scottish Greens launched its General Election manifesto on Monday, stating that the party wants to see a “peaceful revolution” against “austerity, privatisation and the centralisation of power”.

The Greens currently has one MP at Westminster, Caroline Lucas, and Patrick Harvie MSP, Scottish Greens co-convenor, said at the launch in Edinburgh that the Scottish Greens were riding a wave from the referendum, which has had “a transformational effect on our party”.

Green membership has jumped to over 9,000 members, and two independent MSPs, John Finnie and John Wilson, have joined the party.

Harvie said he saw opportunities opening across Europe “for a radical political change”, and said the manifesto outlined by the Scottish Greens was part of that wider movement.

The Scottish Greens manifesto advocates a PS10 minimum wage by 2020, bringing the railways back into public ownership and a ban on fracking, among other policies.

Harvie said the Greens would go further than the SNP in many policy areas, saying the party would ban fracking, oppose the TTIP trade deal entirely, not just advocate exclusion for the NHS, and would not just oppose Trident but challenge “the entire military world view” including membership of the Nato military alliance.

Maggie Chapman, Scottish Greens co-convenor, said the manifesto proposals amounted to “a peaceful revolution”, against “austerity, privatisation and the centralisation of power”.

Isla O’Reilly, Scottish Greens candidate in Inverness, said the party’s ideas were easy to get across on the doorstep, as they stood for “people, planet and peace”. She added: “People are ready to put their faith in us, and they are not wanting to waste their vote on tactical voting.”

In questioning, the party was asked why it was standing in seats it had little chance of winning, when Green votes could be enough to allow Labour to defeat the Greens pro-independence allies the SNP in tightly run constituencies.

Harvie responded: “People who like Green politics vote for them, so many people have settled for the least-worse at the ballot box.”

Peter McColl, candidate for the Scottish Greens target seat in Edinburgh East, added that politics “is about ideas, not just parties”, saying it was important the Green voice was part of the debate in Scotland.

Asked if the Scottish Greens felt left out of the so-called ‘progressive alliance’ between the SNP, Greens in England and Plaid Cymru, Harvie said that “there is common ground between us and the SNP, but also lots of areas of consistent disagreement”, citing the Greens’ opposition to any more North sea oil investment as one of them.

Harvie was asked on what conditions the Greens would prop up a Labour government at Westminster or SNP government at Holyrood, and said he wouldn’t support a government that wanted to continue extracting North Sea oil in Scotland or UK wide.

Asked about the party’s supposed backing of terrorist group ISIS, Harvie said it was “nonsense”, and the policy of individuals on government terrorist lists was created in the 1980s in opposition to the anti-apartheid groups in South Africa being put on the terrorist list, adding that everyone “rational would say ISIS is a terrible threat to humanity”.

The party has been criticised in the press for opposing the banning of terrorist organisations, saying actions, not ideas and membership, is how people should be judged by the law.

Chapman said that the party did not have “a line” for how Scottish Greens’ supporters should vote in constituencies they are not running, saying that it is “the choice of the individual”.