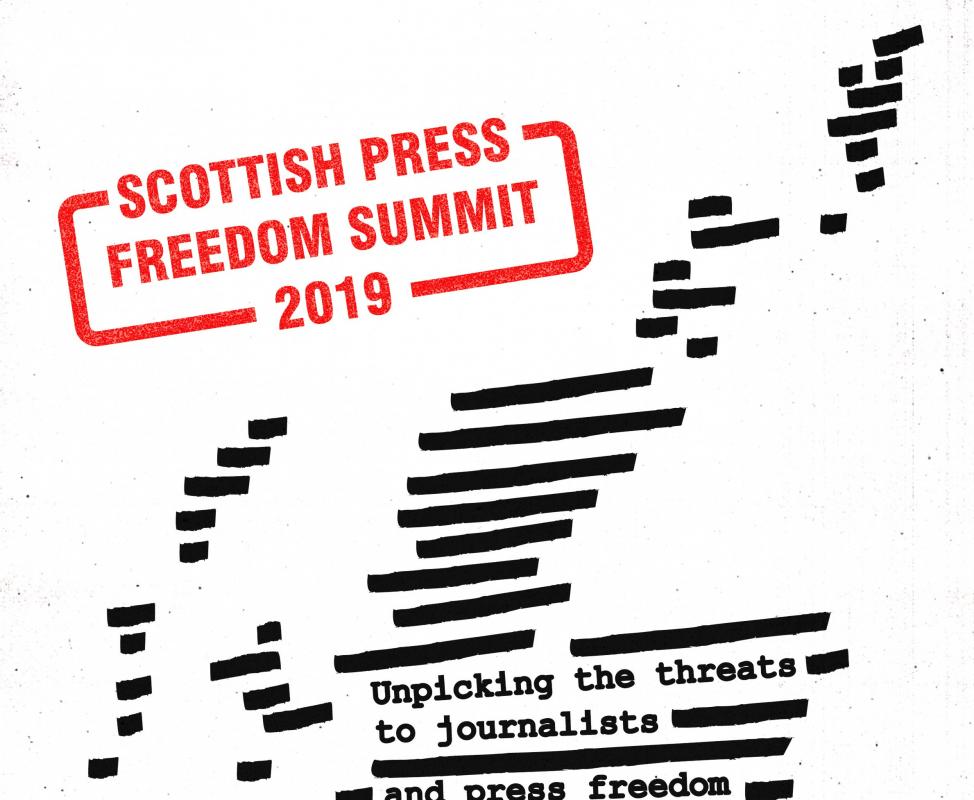 The Scottish Press Freedom Summit will consider mounting threats to journalism, following the imprisonment of over 300 media professionals worldwide

A “GROUND-BREAKING” summit in defence of press freedom will tomorrow [19 July] be held in Edinburgh, following the imprisonment of hundreds of journalists and media workers worldwide in 2019 alone.

The Scottish Press Freedom Summit, jointly organised by Scottish PEN, the National Union of Journalists (NUJ), the Saltire Society and the University of Edinburgh Law School, will assess current threats to journalists, media workers, cartoonists, photographers and publications in Scotland and beyond, and discuss how best to defend press freedom.

The summit will be held in a context of mounting concern within the industry over increasing threats to the media. In 2018, according to Reporters Without Borders, 66 journalists were killed worldwide, while in 2019, 174 journalists, 150 citizen journalists and 17 media assistants were imprisoned while performing their duties.

“We face a serious attack on the freedom of the media – not so much from the government, but from increasing corporate control.” OpenDemocracy editor Adam Ramsay

Furthermore, the summit’s organisers argued, the work of journalists has been increasingly devalued and demonised, an environment that has allowed for violence, disinformation and legal restriction against press freedom.

OpenDemocracy editor and journalist Adam Ramsay, who will be speaking at the summit, told CommonSpace: “With the collapse of the traditional media and the rise of the big data businesses like Facebook and Google, it’s important to understand that we face a serious attack on the freedom of the media – not so much from the government, but from increasing corporate control.

“With the crisis at The Scotsman and the longer term struggles of The Herald, the Scottish Government urgently needs to work with journalists to develop a reporters’ right to buy out our papers and develop robust media co-operatives, just as communities now have the right to buy land when it’s up for sale.”

Speaking to CommonSpace, Scottish PEN project manager Nik Williams also commented: “There are a range of distinct but connected threats to press freedom in Scotland that need to be addressed to ensure journalists are able to continue their work free from threats of censorship, imprisonment or violence.

“Defamation law remains unreformed (although a process is slowly now underway) ensuring that all critical journalism can be shaped and stifled by powerful and wealthy interests. The Investigatory Powers Act expanded UK’s surveillance capabilities in direct conflict with the privacy and security needed for journalists to engage with sources and continue their work free from abuse, intimidation or threats of legal action.

“But there is a role for wider society too. An independent, adversarial and pluralist media is a vital underpinning of democracy, but too often the work of journalists is devalued and cast aside, with little engagement or scrutiny. Criticism helps the press grow, develop and learn from prior mistakes, but we need to be able to stand up for the rights of journalists, across the political spectrum to challenge power and uncover secrets others would prefer hidden.

Williams continued: “Last year, Nicola Sturgeon announced a public consultation, with a view to reform on defamation law in Scotland. This is an important step in the right direction. Defamation hasn’t changed since 1996, leaving it inadequate and out-of-date for everyone in Scotland who chooses to speak out. We need the Scottish Government to stand up to this commitment and ensure the consultation is not ignored and that reform is not delayed.

“Every day we are left with this existing law is a day where wealthy and powerful people who are afraid of scrutiny and criticism are able to control both the press and free expression across Scotland. Scotland and the UK at large can play a powerful role in ensuring journalists everywhere, whether residing in countries that are our closest allies or trading partners, or elsewhere are free to work without fear of violence, censorship or imprisonment.

“We need to show leadership to ensure the principles of free expression and press freedom are embedded in how we reach out to the rest of the world, challenge impunity and oppose corruption and abuses of power, at home and around the world, as this is the groundwater that feeds the majority of threats to journalists everywhere.”

Details of the Scottish Press Freedom Summit 2019 can be found at EventBrite.