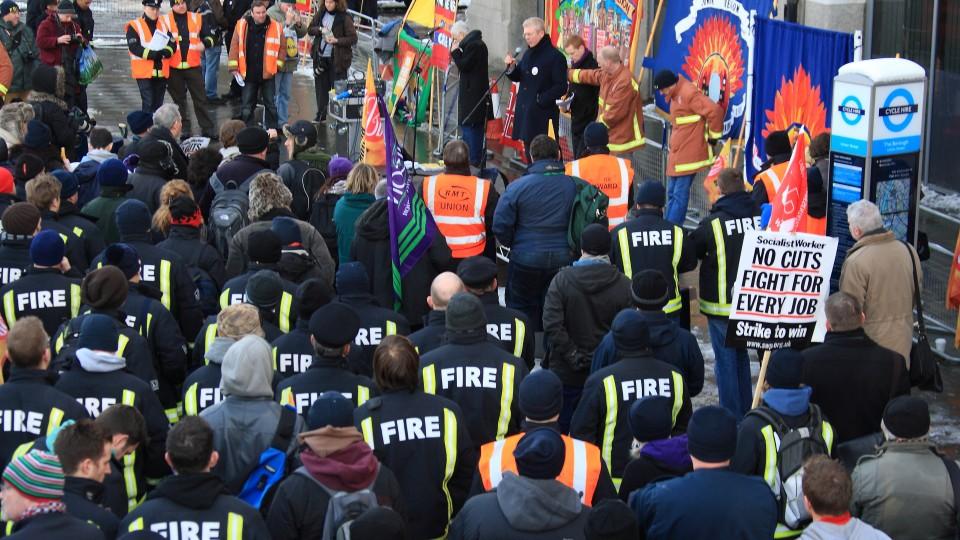 FIRE fighters across England will rally in Westminster today [Wednesday 25 February] as part of a 24-hour strike against cuts to working conditions.

A rally calling for ‘No more lies’ will take place in London to oppose what union officials describe as government betrayal on pension arrangements.

The Fire Brigades Union (FBU) says the UK Government promised that fire fighters over the age of 55 who could no longer pass fitness assessments would be entitled to a full pension or a redeployed role.

Now, fire authorities and national employers have confirmed there is no guarantee.

Matt Wrack, FBU general secretary, said: “Firefighters are justifiably angry with how this government is treating them.

“MPs, the public and firefighters were completely misled and given a false guarantee in order to pass the legislation. This is wrong.

“Firefighters will be protesting in parliament to make their voices heard. They will be asking David Cameron what he is going to do to ensure his government delivers its guarantee. We will not accept these lies – if they can lie to firefighters they can lie to anyone and everyone.”

The strike is not taking place in Scotland, Wales or Northern Ireland.

The trade union explained that the pensions issue has been improved in negotiations with devolved government, but not with Westminster.

The FBU received messages of support from other trade unions, including the Public and Commercial Services Union (PCS), National Union of Teachers, and the United Road Transport Union.

One fire fighter, Paul Drinkwater, created a strike-based rap for the protest entitled ‘We Save People, Not Banks‘. Drinkwater blames a failure to act on banking impropriety and tax avoidance for the state of public finances.

“You cut our jobs and pensions too when all our problems were caused by you,” he explained while standing outside London banking headquarters.

A UK Government spokesperson said the strike was unnecessary.

The 24-hour strike ends on Thursday 26 February at 7am.