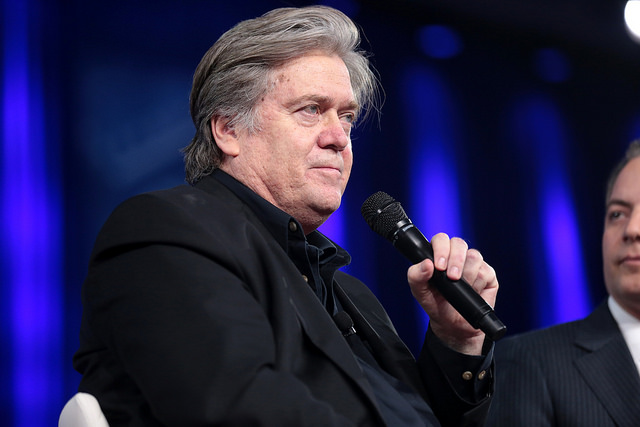 HUNDREDS of anti-racist demonstrators are expected to protest in Edinburgh tomorrow [14 November] against US far-right guru Steve Bannon, who will controversially be speaking at a BBC hosted debate.

The demonstration comes after First Minister Nicola Sturgeon refused to participate in the event after learning that Bannon was also going to be part of it, saying it risked “legitimising or normalising far-right, racist views”.

The BBC said in a statement that Bannon, who many consider to be a white supremacist, was invited by the European Broadcasting Union’s (EBU) News Xchange committee.

“A conference designed to analyse the big issues impacting that world isn’t an endorsement of anyone or anything – it is a function of what journalism is,” a statement added.

Commenting ahead of the demonstration, set to take place at 2.30pm – half an hour before Bannon is due to speak – Zareen Taj from the Muslim Women’s Association of Edinburgh, told CommonSpace that the protest was a defence of “freedom of expression”.

READ MORE – Steve Bannon explained: The war-hungry ideology at the heart of the US regime

She said: “We believe in freedom of expression and tolerant, sensible debate, but Steve Bannon’s politics is an attempt to shut down real debate through hate and dividing communities.

“Bannon was the person who poured fuel onto the flames of debate through Trump’s Presidency. He calls Mexicans rapists, Muslim people evil. Bannon has helped foster a global shift to the far right and has links with the likes of Tommy Robinson in Britain.

“In Scotland we have a strong campaign against the far right and we have created an atmosphere of diversity which has quashed the space for far right politics to thrive.”

Asked about the BBC’s decision to host Bannon and Sturgeon’s boycott of it, Taj said:

“She’s our hero. We are right behind [Sturgeon’s] decision to not participate in an event which Bannon was invited to, because he thrives on the opportunity to scapegoat people, and it is really a politics of fascism.

“The license fee means they should be answerable to the public, and that means they shouldn’t be disproportionately giving a platform to the likes of Nigel Farage and Tommy Robinson, which is what they are doing. We need to keep pushing for proper representation on the BBC, and the Muslim Women’s Association stand by our First Minister.”

The demonstration is being organized by anti-racist coalition Stand Up To Racism, and they stated on their facebook event: “Stand up to Racism condemns the invitation of the European Broadcasting Union’s News Xchange committee to Alt-Right guru Steve Bannon to speak on 14 November at its event in Edinburgh.

“Organisers describe Bannon as a “political strategist”. He is attempting to build an Islamophobic international of far-right groups and is looking to fascist Tommy Robinson here in Britain as a key figure for his movement.

“Bannon was the white supremacists’ link to Donald Trump’s White House until August 2017. He is due to speak from 3pm on 14 November at Edinburgh International Conference Centre.

“We welcome Scottish First Minister Nicola Sturgeon’s decision to pull out of speaking at the event and agree with her view that giving Bannon a platform risks ‘legitimising or normalising far-right, racist views’.

The First Minister said at the time of her decision to pull out of the event: “The email the BBC sent to my office justifying Bannon’s inclusion described him as a ‘powerful and influential figure … promoting an anti-elite movement’. This kind of language to describe views that many would describe as fascist does seem to me to run the risk of normalisation.”

Bannon served as Donald Trump’s campaign strategist and then his special advisor for the first seven months of his Presidency, after being Executive chairman of far-right news outlet Breitbart. After leaving the White he said he wanted to become “the infrastructure, globally, for the global populist movement”, and has gone on to help build radical right parties internationally, most notably in Europe and Latin America.

For more details on the Stand up to Racism demonstration, click here.