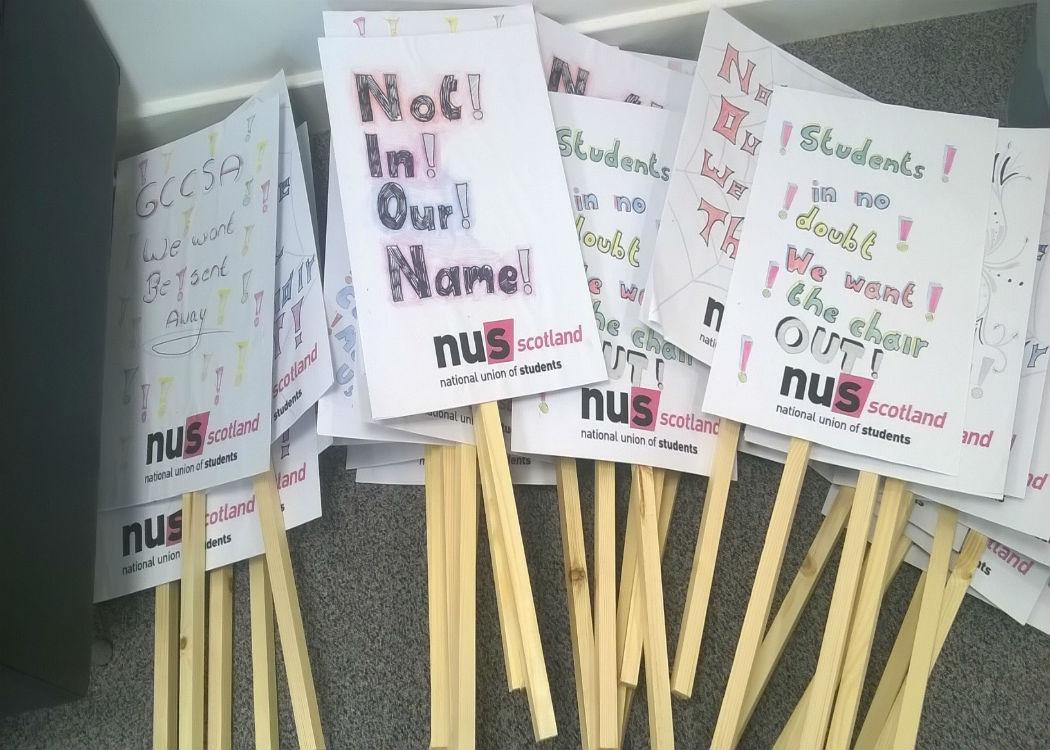 Chair of board, George Chalmers, under pressure from students and funding body, which has criticised his leadership after college principal suspension

GLASGOW Clyde College students demonstrated outside a college management board meeting on Thursday, demanding that the chair of the board, George Chalmers, resign for undermining student rights.

CommonSpace reported earlier this month that students at the college passed a vote of no confidence in Chalmers after he told student representatives on the board to leave a meeting which led to the suspension of college principal Susan Walsh.

The students’ vote of no confidence was rejected at the board meeting, of which the student representatives were in attendance.

“There’s been a good turnout today and NUS Scotland are right behind us; this is definitely the start of something.” Alessio Gentile

Alessio Gentile, education and development officer at Glasgow Clyde College Students Association, spoke to CommonSpace at the demonstration, saying: “There’s been a good turnout today and NUS Scotland are right behind us; this is definitely the start of something.”

He described the board’s attitude towards the student representatives as “contemptible”.

“Staff and students are supposed to have an input, that’s the way it’s supposed to work to sort out problems at the college.”

The reasons for the suspension of Walsh have still not been made public, as the college says an investigation is continuing.

NUS Scotland has thrown its support behind the students call for Chalmers to step down, and president Gordon Maloney told CommonSpace the actions of management have been “indefensible”.

“When the students here passed a vote of no confidence his position became untenable. No one can govern a college where the people he’s meant to be serving have no faith in him.”

Maloney said that Glasgow Clyde College was a model example of how to respond to management breaking the new governance structures.

“I hope every other college is watching what’s happening today, because there’s been a lot of discussion about the new governance model and what you do when management breaches the rules. And this is what you do when they breach the rules – you kick them out.”

In a leaked letter to The Herald, Scottish Funding Council (SFC) chief Laurence Howells wrote to Chalmers spelling out his displeasure about his “discharge” of responsibilities as chair of the college.

Howells wrote: “I remain dissatisfied with particular aspects of those responses which further augment concern regarding the governance and management of the college and specifically the discharge of your responsibilities as chair.” (Click here to read more)

Maloney claims that the funding council has also lost faith in the chair, and called on the Scottish Government to intervene to resolve the issue, adding that: “It’s in the interests of everyone that he [Chalmers] goes.”

McGarvey also said that student journalists had been warned not to report on the student demonstration by staff, which other college sources have backed up to CommonSpace.

“Ultimately what this is about is two competing visions of what colleges and education is for. One is this factory model where you chew students out for the jobs market, the other is where you take students seriously, treat them as equals, because it’s their education,” Maloney added.

The SFC has also opened up an independent investigation into the Glasgow Colleges Regional Board (GCRB), which was set up last August to manage the three ‘super-colleges’ in Glasgow, which have been merged as part of the Scottish Government’s regionalisation process in further education.

The SFC says GCRB, which is chaired by former First Minister Henry Mcleish, is still in no position to take over the funding process for the colleges, and have launched an investigation to understand why the board is behind schedule.

Darren McGarvey, a journalist student at the college, spoke at the demonstration on Thursday, and said the students need to hold the GCRB to account.

He said GCRB has “more power over Glasgow’s colleges than the colleges themselves, and they have the power to take money away from specific colleges if they so please”.

McGarvey added that it was vital the student representatives who have stood up to the management board were defended, because “they’ve put their neck on the line”.

McGarvey also said that student journalists had been warned not to report on the student demonstration by staff, which other college sources have backed up to CommonSpace.

Barclay McCrindle, Glasgow Clyde College Students Association president, said the students will be meeting next week to discuss their next moves.