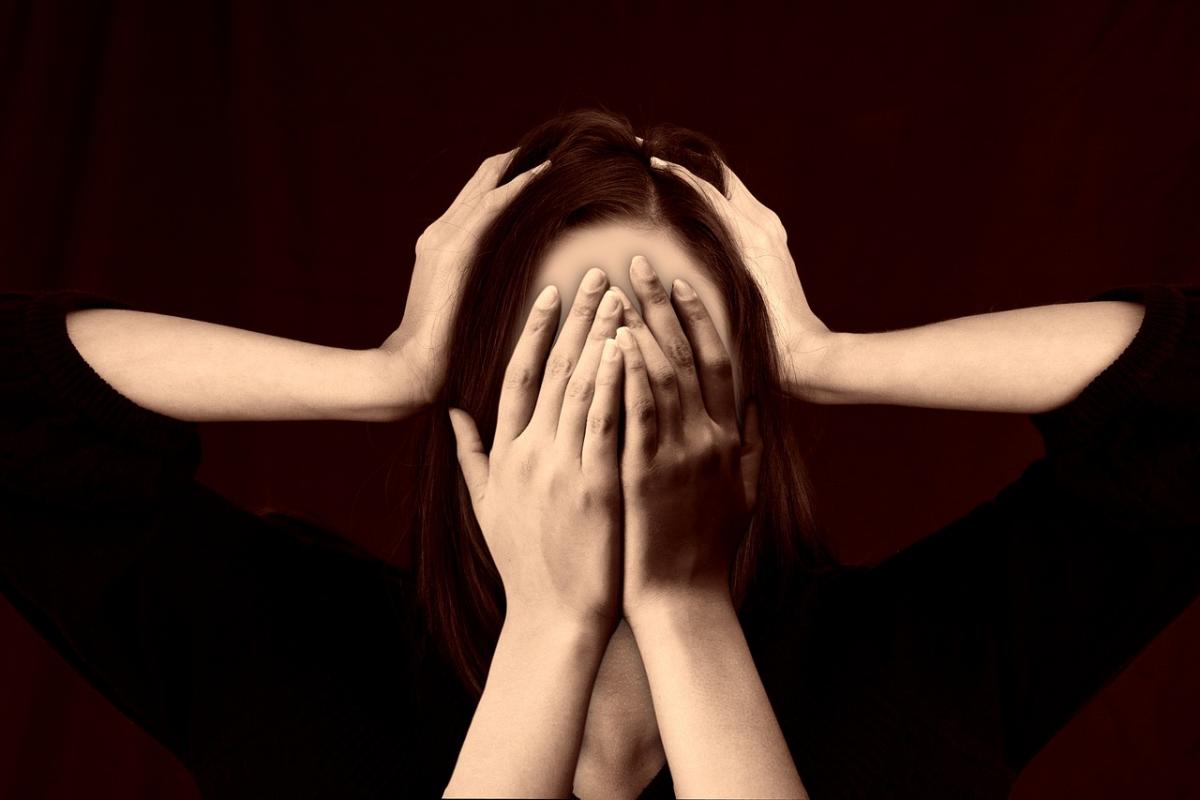 With menopause hitting the headlines due to HRT shortages, and MPs adding their voices to support for menopause policies in the workplace, @RhiannonDavies spoke to women around Scotland tackling the taboo.

Like so many people that go through the menopause, Karen Kenning didn’t realise what was happening in the beginning.

“I was mortified,” Kenning, in Elgin tells CommonSpace. “I could be sitting at my desk with water running off my back and down my nose – looking like I’d just got out of the shower. Two or three times a day, I’d have to scoot off to the loos to mop myself up. And it wasn’t something I felt I could have a conversation about. If there had been more awareness, if there had been posters in the staff tea-room, I could have looked and said – ‘that’s what’s happening to me’.”

It took years for Kenning’s symptoms to be recognised as being the menopause, and she’s not the only one. Other women report talking to their doctor about what they’re going through and then being incorrectly prescribed sleeping tablets or anti-depressants.

There are 34 recognised symptoms of the menopause, and no two women will experience it in the same way or for the same length of time. Most people have heard of hot flushes, but might not know that menopause can also cause joint pain, chronic fatigue, night sweats, hair loss, memory lapses, dizziness, itchy skin, anxiety and headaches.

“We talk about everything these days and as women grow up, there is plenty of information available on periods, pregnancy, postnatal depression, pelvic floors. But then it just drops off the face of the earth. It’s almost as if your usefulness is done and there’s nothing there for you. At one point, I thought I might have early onset dementia. I tried to open my front door with the zapper for the car, or would forget what I was saying mid-conversation. Now it seems so obvious, but the GPs didn’t pick it up in my countless trips to the surgery,” Kenning she says.

Kenning is one of four women who, although they have never met, came together to form the Pausitivity group and the #KnowYourMenopause campaign. They worked with a local designer to create a poster that highlights some of the common symptoms. Their aim is to get it into every GPs waiting room, to provide women with that ‘aha’ moment and help trigger conversations. 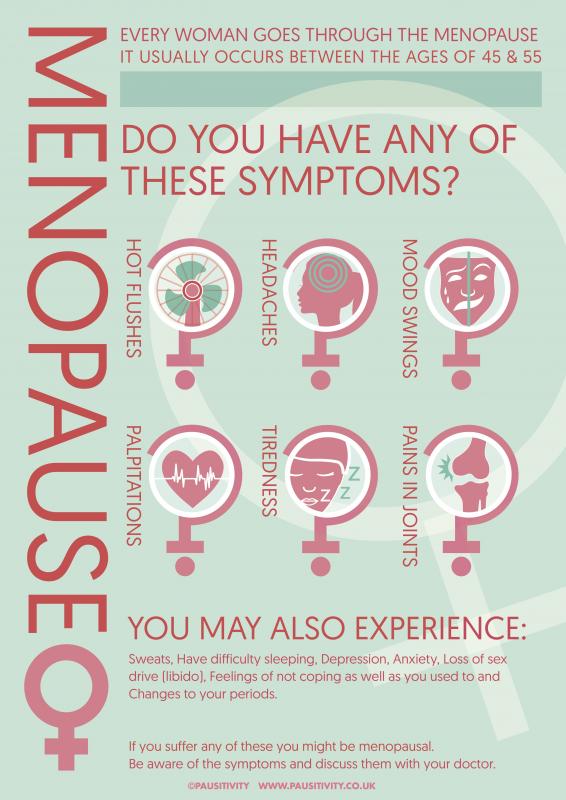 The average age for menopause is between 45 and 55 but it can happen to women on either side of that age bracket, and perimenopausal symptoms can begin a few years earlier. Rachel Weiss, a Perth-based coach and consultant, was about to turn 51 when she watched Kirsty Wark’s ‘Menopause and Me’ documentary on the BBC. She was struck by the fact that almost all women will go through the menopause, but yet it still isn’t spoken about.

Weiss had previously hosted ‘Death Cafés’, which enable a group discussion of death without agenda or objective. She asked people whether they would be interested in a ‘Menopause Café’, the response was resoundingly positive. The first event was held in Perth in June, 2017.

There are now menopause cafes the length and breadth of the country and they even held the world’s first Menopause Festival earlier this year. It operates as a social franchise, whereby anyone can host a café, so long as they abide to a few core principles.

“There is this bizarre stigma about it, or shame attached to being an older woman in today’s society”

“What they say when they leave [the cafe] is ‘now I know I’m not alone’,” Weiss explains. “A lot of people are isolated and feel they can’t talk to anyone about it. There is this bizarre stigma about it, or shame attached to being an older woman in today’s society. In fact, in other societies where older women are more respected there are far less symptoms of the anxiety and depression type.

“The other thing I’ve heard is “now I know I’m not going mad’ – especially when people’s memory, or confidence goes or they feel more irritable. Or they don’t know what’s happening to them – these are psychological symptoms that you generally never hear about.”

It’s not just women going through the menopause who attend these events. Weiss says a man in his 30s came to one that she hosted – to better understand what his mother was going through. A husband and wife couple attended another. For many women campaigning on this issue, it’s important that the message reaches men too, not just to drive awareness and decrease stigma, but also because menopause can also impact relationships and families.

While raising awareness and starting conversations in private is one important aspect of these campaigns, others have chosen to focus their attentions on how menopause affects women in the workplace. In May this year, MSPs unanimously voted in support of Christina McKelvie’s motion to end stigma around the menopause. In it, she congratulated the STUC Women’s Committee for their survey and report on this issue.

The survey they carried out of women members in 2018, found that:

The Scottish Women’s Convention is an organisation funded by the Scottish Government Equality Unit to ensure women’s voices reached policy makers. They travel around Scotland having conversations with groups of women about issues in their area and noticed that menopause was something that kept coming up, but almost as an aside. After speaking to the STUC about their work on this, they decided they wanted to take it a stage further and held a conference in February of this year. Read their report here.

Agnes Tolmie, Chair of the SWC, has personal experience of the negative impact of menopause in the workplace.

“I remember sitting in a meeting and suddenly felt like my feet were on fire. It was January in Edinburgh and it was a room full of senior men, but I had to open all the windows. Everyone else was thinking I was a lunatic, but it’s just really hard to explain. You feel like you’re the only person going through it.”

“it’s like a heat-seeking missile; you know it’s coming but can’t get out of the way”

She heard from women at the conference who said they had held themselves back from going for a promotion or some other opportunity because they were embarrassed or worried they might have a flush during an interview.

“We need basic awareness training,” Tolmie says. “We do it for lots of other illness and conditions. It’s just part of being a women, but it’s like a heat-seeking missile; you know it’s coming but can’t get out of the way. For workplaces, particularly those that are target-driven, that means accepting that women might need some extra support.”

That could mean allowing them an hour off, awareness that they might need cooling packs, or uniform adjustments. It can mean providing a space for women to go and cool down, or wash if they’ve had a flush or a bleeding flood. It also includes proper absence management. If a woman takes a day off for a migraine one month and then a fatigue the following month, they could be recorded as different events, possibly resulting in punitive measures. Therefore employers are asked to consider all symptoms as part of the same cause.

Tolmie goes on: “The key thing is that women want to work. They don’t want to have to take time off or stay home one day. They might just need a bit of space at work. Somewhere where they can open the window, have a drink of water. And we need recognition that these women aren’t slackers, or they haven’t forgotten what they were doing because they are stupid.”

MPs are now calling for menopause policies to be as standard as maternity policies in the workplace, and some employers are already leading the way. South Lanarkshire council introduced its menopause policy in October last year. Historic Environment Scotland has also incorporated menopause awareness and training into its strategic overview of their health and wellbeing approach for staff.

Nicola Ritchie, head of Organisational Development and Human Resources at HES, tells CommonSpace: “We’ve had lots of positive feedback from women, but also had a lot of men who have shown an interest, not just for their work, but also to better inform them about family members or partners who might be going through it. Because of this awareness, we’re now hearing menopause discussed openly in formal meetings in way that probably wouldn’t have happened before.”

“Women of my generation fought the fight to get women’s equality, what we haven’t done is set ourselves free”

However, as more and more women speak out and momentum gains around awareness raising, there are concerns by some women. Weiss worries that there could be dangers: “My only concerns is that I don’t want it to result in employers not taking on women in their late forties, early fifties – thinking that they might be a liability.

“People could assume that everyone has the worst possible scenario, when in fact 20 per cent of women sail through it without any symptoms at all.”

Tolmie views the issue as another extension of the fight for women’s equality.

“We need to get it into women themselves, that it’s a natural thing to happen,” she says. “Women of my generation fought the fight to get women’s equality, what we haven’t done is set ourselves free; to be open about what happens to us. It’s always been about votes, positions, inclusiveness. We still haven’t been allowed to be us.”