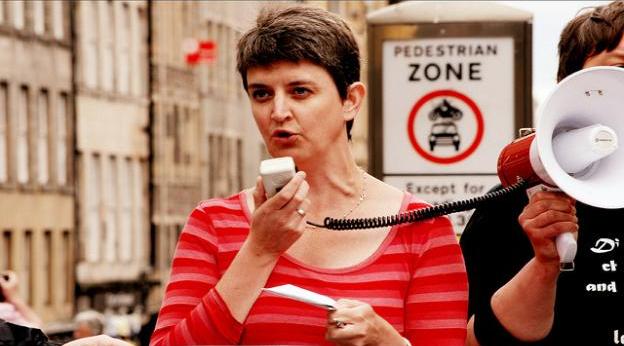 THE SCOTTISH GREEN PARTY will highlight the influence the party says it continues to wield over the SNP’s minority Scottish Government at its first conference of 2018.

Following concessions won by the party in recent months during the Scottish budget process and the ongoing emergency Continuity Bill, the Scottish Greens will reaffirm co-convener Patrick Harvie’s argument during their October conference in Edinburgh last year that their position in Holyrood has allowed them to push the Scottish Government towards more radical policies.

Scottish Green co-convener Maggie Chapman is expected to use her keynote speech at the 17 March gathering in Greenock to tell party members: “We gather at a time when things seems more unstable and unpredictable than they’ve been for a while.

“Throughout history, change has often seemed impossible. But once it comes, it seems like change was always inevitable.”

Chapman will emphasise the radical legacy the Scottish Greens believe themselves to be a part of, while also pointing to what lies ahead for the party: “This year we celebrated 100 years of some women being allowed to vote for the first time in the UK. Next year will be the 25th anniversary of the end of apartheid in South Africa.

“We need people who are committed to making the change we need to see in the world. We are the people leading the change.”

Of particular focus will be housing, the subject of Green MSP Andy Wightman’s ongoing Homes First campaign, and local tax reform, which the Scottish Greens have indicated will be a precondition to securing Green support for any future Scottish budget.

“Greens have always been the radical voices. We still have so much more to do.” Scottish Green co-convener Maggie Chapman

Articulating the Greens’ overarching ideological goals, Chapman will argue: “The world we are working towards is one of equality, social justice and non-violence; it is a world where radical participatory democracy is how we make decisions; and it is one where the rape and exploitation of our environment, and the destruction of our climate, is not a function of the economy.

“On climate change and the environment, we’ve been right on this issue from long before anyone else cared. Most recently we led the opposition to fracking, building a social movement with and as ordinary people in communities, with and as grassroots organisers.

“These social movements are working against the old institutions. Greens have always been the radical voices. We still have so much more to do.

“We will continue to lead the change.”