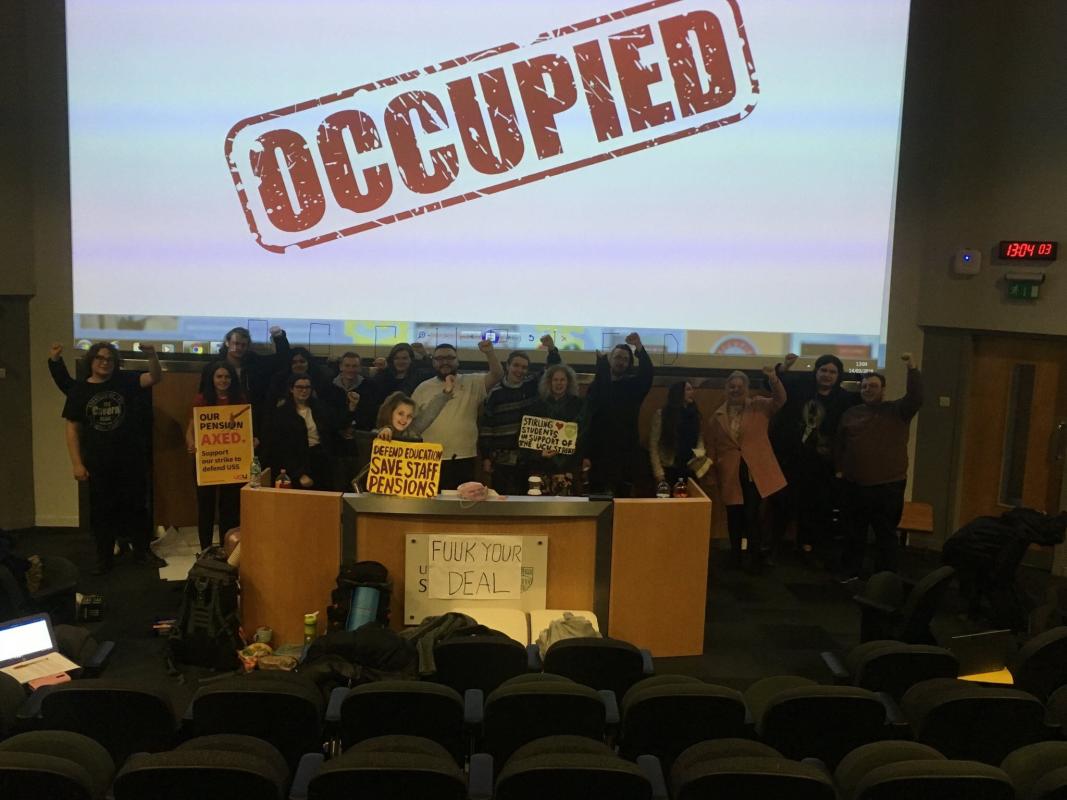 THE UNIVERSITY OF STIRLING has become the latest scene of a student occupation in support of the ongoing UCU strike.

On the morning on 14 March, a group of Stirling students occupied the Logie lecture theatre in the university’s Bridge of Allen campus, stating their “direct support” for staff striking over pensions, and refusing to leave the building until their demands are met.

In a statement, those students participating in the occupation issued a series of demands to University of Stirling Vice Chancellor Gerry McCormac: firstly, that he “unconditionally change his position and vocalise support for his striking staff”, that he “guarantee all those involved in industrial action are not deducted wages for their engagement in what is lawful and legitimate strike action”, and that a guarantee is made that “no lectures will be rearranged, no staff are forced to reschedule, and no recorded lectures are disseminated without the lecturers’ explicit permission”.

The statement firmly asserts that those involved in the occupation “will not tolerate any strikebreaking” and expresses solidarity with both striking staff and other students occupations are the UK.

It was announced yesterday by UCU that the union had rejected proposals drawn up at talks between UCU and Universities UK (UUK) to end the strike, following the proposals’ widespread rejection by UCU branches. Last week, the union warned that universities would be hit by a second wave of 14 strike days, targeted at exams and assessments, if the matter was not resolved.

Speaking to CommonSpace, Tom Flanagan, a spokesperson for the occupation, confirmed that as of the afternoon of 14 March, they have had “no contact from university management at all” in response to their demands.

“Our only contact with university staff has been cleaners and security,” said Flanagan.

Asked what the nature of the response had been from campus security, Flanagan continued: “They’ve been really helpful. They’ve said they’re going to keep the heating on for us, and they’re more concerned about our safety than anything else.”

Discussing how long they were prepared to engage in the occupation, Flanagan said: “As long as it takes. I mean, there are some universities that have been going days and weeks, so it could potentially be that long.”

The students came prepared, and are supplied for what lies ahead however: “We’ve got food and stuff with us for a couple of days, but lecturers have said they’re going to drop food off with us if we run out and any other supplies we need.”

Asked what tactics might be employed to prevent strikebreaking, Flanagan emphasised that the peaceful occupation was their primary concern, saying: “The main thing is the occupation – obviously that’s led to cancelled lectures. So that is us stopping the strikebreaking – stopping those lectures going ahead. Some of them have been rearranged, but some of them are too big to go in any other lecture theatre.”

Flanagan confirmed that those taking part in the occupation numbered “just shy of 20”, but said that response from the wider student body had been supportive, saying: “I think, on the whole, it’s been very positive.”

Flanagan said that any contact with university management would be reported via public statements on the occupation’s Twitter feed, @StirSolidarity.

At the time of writing, university occupations in support of the strike are taking place in Exeter, Bath, Dundee, Aberdeen, Cambridge, York, Stirling, Sheffield, Reading and Edinburgh.