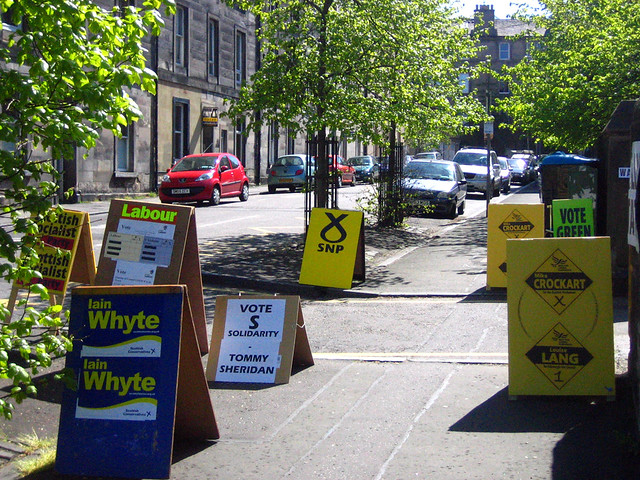 If Boris Johnson’s plans for an October 14 election comes to pass, what key developments can we expect from a Scottish perspective?

PRIME MINISTER Boris Johnson yesterday [2 September] made it clear that if MPs back an attempt to block a no-deal Brexit, he will authorise a snap General Election for 14 October within 24 hours.

Johnson hopes that a fresh vote, held before the 31 October deadline for leaving the European Union, would provide his government with a fresh mandate to deliver Brexit. Many of his opponents, including some Tory rebels, conversely hope that an election before the deadline could prevent the UK crashing out of the EU without a deal.

If such an election comes to pass, what can Scotland expect?

There is a near-universal assumption amongst the pundit and political class that an autumn General Election would see some significant gains for the SNP, which could perhaps even propel them back to post-2015 levels of Westminster representation.

The hardening of anti-Tory sentiment in Scotland following the ascension of Boris Johnson to Downing Street, coupled with residual resentment from the Scottish Remain-voting majority over Brexit, the disarray of the Scottish Tories and a divide between the UK and Scottish Labour leaderships all spell good tidings for the SNP, which perhaps explains the lack of reticence shown by First Minister Nicola Sturgeon about the prospect of what would be a brief, chaotic election campaign.

Sturgeon’s apparent confidence is backed up by recent polling: according to a survey of 10,000 adults commissioned by the Conservative Group for Europe, a snap General Election would see the SNP gain 17 seats – 52 out of Scotland’s total of 59.

SNP campaigners will – or, at least, should be – painfully aware of the price overconfidence can exact, with memories of their disappointments in 2017 still fresh. Nevertheless, a 2019 vote would provide far more favourable circumstances for the party, so a mood of cautious optimism is understandable.

What hasn’t changed is an appetite amongst the SNP grassroots for a clear strategy on a second independence referendum. As even the most dedicated adherents of the party will now admit, combative rhetoric from the leadership and shifts in public support for independence can only take you so far. What comes next may be determined by developments outside of any SNP gains that are made.

Since the explosive intervention of Shadow Chancellor John McDonnell last month, it seems that barely a week has gone by without some further modification or revision to Labour’s position on a second independence referendum. The most recent of these was UK Labour leader Jeremy Corbyn’s declaration that, while another vote would be possible under a Labour government – given sufficient public support and a fresh mandate – it would not take place within the “formative years” of a Corbyn administration. This scenario would, if it held true, put an end to Nicola Sturgeon’s stated aim of securing a referendum before the 2021 Holyrood elections.

And yet, Corbyn’s preferred outcome – which it is difficult to see as a line in the sand, given how quickly the sands have shifted under Labour’s previous constitutional positions – may not necessarily be political reality. The same polling which predicts significant SNP gains also prophesize a hung parliament, with the Tories on 311, Labour on 242, the Liberal Democrats on 21, Plaid Cymru on four and the Green Party on one.

There has predictably been much talk of an SNP-Labour confidence-and-supply arrangement, but if this polling holds true, even a deal between Labour, the SNP, Plaid Cymru and the Greens would not outnumber Tory MPs. The Lib Dems – even putting aside the taint of their previous coalition with the Conservatives – are highly unlikely to enter into any arrangement that also includes the SNP. If Labour do wish to work with the SNP, the first thing they’ll need to make unexpected gains of their own in order to ensure a semi-functioning government.

Secondly, they will need to convince the SNP-as-kingmakers that a Labour Government can be trusted to deliver a second independence referendum – uncertain, given the controversy and in-fighting provoked by McDonnell’s initial comments, and the general failure Labour has had putting the genie back in the bottle – and at a time agreed upon by both parties. The complexities of such a negotiation do not bear prediction.

A baptism of fire for the Scottish Tories

The Scottish Tories could be forgiven for treating the prospect of a snap election with dread. Reports have already emerged that some amongst their senior ranks have resigned themselves to crushing losses amongst their 13 MPs, perhaps even on the scale of the 1997 wipe-out.

The reasons for this, not coincidentally, virtually mirror the SNP’s causes for optimism: following the resignation of Ruth Davidson – who, in the latter days of her tenure, was unable to balance the competing demands of party loyalty, her own views on Brexit and Johnson, the grumbling demands of the Scottish Tory grassroots and holding firm for the Union – the party is leaderless, with no clear choice for a replacement. Even once-reliable Scottish Tory voters may find themselves wondering not only who, but what are they voting for?

Are the Scottish Tories a Brexiteer party, even unto the point of No Deal? Are they now Johnsonite in tooth and claw? Will their policy platform remain unchanged, or will a new leader bring new ideas? Even the Conservative brand’s once-solid unionist credentials have been undermined by a prime minister who seems cheerfully unconcerned by the impact his premiership and his strategy (for lack of a better word) on Brexit has on Scotland. All of this invites confusion, and without a leader to distract from such inconsistencies with personality, it is unlikely that will result in electoral success.

A snap General Election arguably triggered by the troubled course of Brexit will almost certainly require the various parties to reassert their positions on the issues that go with it: Scotland’s Remain vote will be trumpeted by the SNP and demands for a ‘People’s Vote’ will almost certainly take pride of place in the Lib Dems’ campaign. Labour’s murky stance on Brexit in general and a second EU vote – already unsatisfactory to the anti-EU Left and diehard Remainers alike – will become subject to further examination, possibly to Labour’s detriment.

More generally, an election called in response to a crisis will require the parties to spell out how they will resolve the crisis. Should the UK go to the polls this autumn, Brexit will be more than a matter of ideological position, but an urgent problem to be addressed. All contenders will need to do more than articulate a vision of principle – they will need to present a solution.

This will be difficult enough on a UK-wide basis, but if the solutions present convince voters in England but not in Scotland, or if Scotland’s views are disregarded once again, the resulting electoral divide and democratic deficit will only fuel the constitutional discourse.