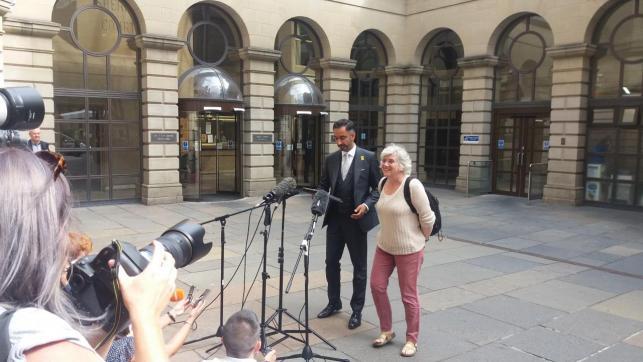 The exiled former Catalan minister has published a proposal calling for “peace, amnesty and self-determination” as political unrest continues

EXILED former Catalan minister Clara Ponsati has proposed a series of demands for Catalonia’s independence movement to unite around amidst the protests which have followed last week’s sentencing of nine pro-independence leaders by the Spanish Supreme Court.

A week after the verdict, ongoing protests in Catalonia – including a nationwide general strike on 18 October, which saw an estimated half a million participants gather in Barcelona – have seen numerous clashes between demonstrators and police, with nearly 600 injuries reported.

Spanish president Pedro Sánchez today visited the Catalan capital, but left without speaking to the Catalan president Quim Torra, despite urgings from the pro-independence activist group Tsunami Democràtic, which called on protestors to sit en mass around the Spanish Government’s Barcelona headquarters with their arms raised to compel the two leaders into dialogue.

Sánchez has rebuffed these growing calls, stating repeatedly that Torra must “rotundly” reject violence before any official talks can move forward. The Spanish Government has so far not been satisfied by previous condemnations from Torra, who said last week: “This has to stop right now. There is no reason or justification for burning cars, nor any other vandalism. Protest should be peaceful.”

In an article published today [21 October] on VilaWeb, Ponsati – who remains wanted by Spanish authorities for her role in the outlawed 2017 Catalan independence referendum and currently resides in Scotland – argues that, with the eyes of the world upon their struggle, protestors must be clear in their aims, which she believes should be peace, amnesty and self-determination.

Ponsati writes: “What do Catalans want? What goals are being pursued by students who leave their classrooms, businesses that stop working and people of all ages and walks of life who take to the streets and occupy railway lines, train stations and airports? Why are they standing up to police violence? That’s why it is important that those who engage in protests share and endorse the same objectives for the Catalan revolt, even if they mobilise in different ways and to a different extent over time.”

In order to assure immediate peace in Catalonia, Ponsati’s proposal would demand the withdrawal of “occupation forces”, including Spanish police, from Catalonia, the resignation of the Catalan interior minister, and a “thorough” investigation of the widespread police violence that has met the Catalan protests.

“We believe the European Union no longer has any legitimacy to oversee the situation in Catalonia.” Former Catalan minister Clara Ponsati

Regarding the prison sentences of between 9-13 years handed down to nine of the 12 civil and political leaders last week which spurred the protests, Ponsati’s proposal also demands amnesty for Catalonia’s “political prisoners”, the immediate release of all the other political prisoners, the safe return of exiles such as herself and former Catalan president Carles Puigdemont, and the end of “judicial persecution of the independence movement.”

To resolve Catalonia’s political crisis, Ponsati finally reiterates growing calls for a “self-determination referendum to validate the creation of an independent Catalan republic.” Such a vote, Ponsati argues, must be organised by the Catalan Government with the agreement of the Spanish Government, and would be supervised by non-specified “international authorities.”

Ponsati also writes: “We believe the European Union no longer has any legitimacy to oversee the situation in Catalonia, but we think that there are countries (in Europe and elsewhere) and international institutions that could validate the outcome of the vote, which should lead to the immediate proclamation of the Republic in the event of a Yes win.”

Following the announcement of the Catalan verdict, which was quickly condemned by First Minister Nicola Sturgeon, Ponsati’s lawyer Aamer Anwar confirmed to CommonSpace that her legal team were preparing for the possibility that Spain would make another attempt to extradite Ponsati after the withdrawal of her European Arrest Warrant last year.

Anwar said: “At this point in time, we are now preparing for international warrants to be executed against Clara Ponsati, as well as Puigdemont and Comin and others.

“We expect the people of Scotland and the people of Catalonia to be standing shoulder-to-shoulder with Clara Ponsati in her struggle for justice.”