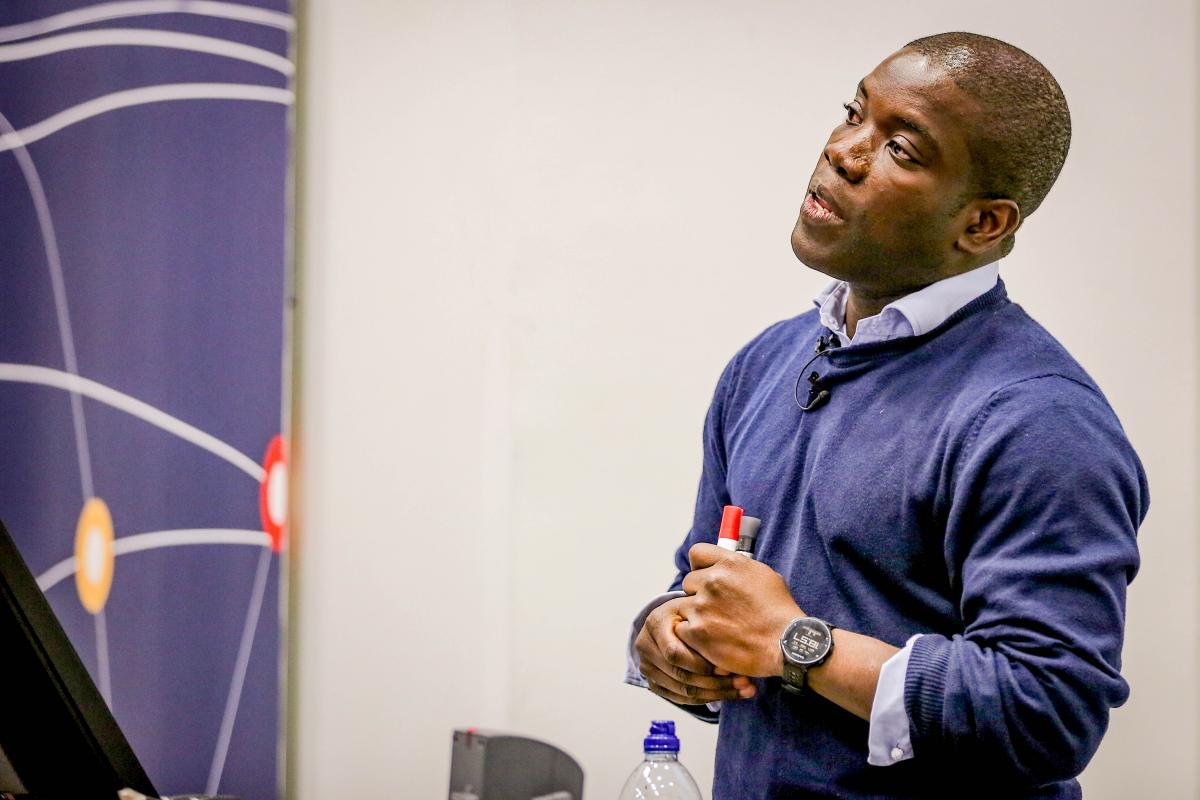 Facing the possibility that his deportation could begin at any moment, the former banker at UBS jailed in 2012 for fraud talks to CommonSpace about the motivations behind the ‘hostile environment’ policy and how our society is driven by ‘extractive capitalism’

KWEKU ADOBOLI, the former banker at UBS who was convicted in 2012 for fraud, could potentially be picked up at any moment and transported to a detention centre ahead of his potential deportation to Ghana, the nation of his birth.

In June of this year, Adoboli’s four year legal battle to overturn the deportation order against him was rejected by the court of appeal. Despite being released from prison in 2015, under current UK Government policy, any foreign national sentenced to more than four years is automatically considered for deportation, despite the fact Adoboli left Ghana at the age of four and has spent the vast majority of his life in the UK after settling at age 12.

Yesterday, Green MSP Andy Wightman, for whom Adoboli is a constituent, announced on social media that he had written to Home Secretary Sajid Javid, arguing that Adoboli is “engaged in work to drive systemic and cultural change within the UK financial services industry,” and requesting that Javid use his discretion to ensure that the threat of deportation is removed. Wightman told CommonSpace that he had received confirmation from the private secretary on the UK immigration desk that it had been received and “is being dealt with”.

I have written to the Home Secretary to ask him to remove the imminent threat of deportation facing my constituent, Kweku Adoboli https://t.co/DaSVd9i7qZ pic.twitter.com/JGPAiymC3o

Adoboli, who was involved in what has been described as “the largest trading loss in British banking history”, which it is claimed lost UBS £1.4 billion and resulted in a £29.7 million fine, has today [17 August] launched a fundraiser with campaign group Crowd Justice, to help pursue his case against deportation further.

Speaking to CommonSpace, Adoboli explained his current situation, arguing that the Home Office is trying to expedite the deportation order to undermine his ability to legally defend himself.

“I could get picked up any day,” he said. “But I am still in the process of instructing my lawyers. Me being picked up, whatever they do with me, would make it impossible to make said claim. Which is clearly why the Home Office has asked to expedite it [the deportation order] – they’ve done it in the summer when there’s no one around.

“When they asked to expedite it, I responded to the court by saying: ‘My barrister is on annual leave, and the first opportunity I’ll have to meet with her on the 10 of September. So, can you just wait until September, because as soon as you act, I need to respond within seven days?’ And the court turned around and said, ‘Sorry, mate.’ Which is just crazy – even if my application had no grounds, it’s in the interests of justice to await it.”

Explaining the bureaucracy that surrounds a deportation of this kind, Adoboli said that such a removal “requires a number of steps. They would need to ascertain my legal travel documents, whether my passport is valid – all of that would take a number of days. So if they did pick me up, what they would have to do is put me in a detention centre. I suspect the detention centre would be somewhere in Scotland. And then they would, as fast as they can, they would try and put me on a plane out of here.”

Given the notorious lack of certainty about how long detainees may be held in detention centres such as Dungavel, Adoboli confirmed that he had not been provided with a timeframe for how long he might be in a detention centre.

READ MORE: Reckless gamble: Meet the rogue trader risking everything to blow the whistle on the banking system

Adoboli said he is a reformed character since his time in prison, having spent much of his time since his release pursuing voluntary work highlighting the dangers of the high-risk culture of the finance sector and critiquing what he regards as the unbalanced system that facilitated his downfall. His experiences with UK immigration have convinced him that the UK Government’s policy goals are being pursued at the expense of justice.

“The rules around automatic deportation – they’re not very reflective of the true risk of an individual who has committed an offence. We have many examples of where a foreign national commits an offence and gets a twelve month sentence, and a UK national commits the exact same offence and gets a community service order. In a way, these rules are, in my opinion, a reflection of our [the UK’s] efforts to send a message to the rest of the world not to come here. We are using these rules and laws to send the real message about how open a country we are.”

Adoboli, the son of a United Nations peacekeeper, said that, after coming to the UK as a child, “I always believed this was an open, forward-looking country that was trying to set an example for the rest of the world. Unfortunately, these immigration laws have forced me to question how valid that is, and that’s really worrying.”

He explained : “Having a rule that says a foreign national offender – especially one that was born here or came here at a very young age – to tear that person away from their home and their friends says something about how we group people, and how we stratify the classes. What we are effectively saying is that there is a group of people in our community that are irredeemable.

“Imagine that someone who commits an offence is truly a criminal; the idea is that you send them to prison to be rehabilitated and redeemed. But what we’re actually saying is that there are groups of people in our society that are simply irredeemable. Philosophically, that’s problematic for me, because if the question of that person being redeemable is determined by their nationality, then we’re effectively saying something about ‘others’ that are different than ‘us’. And that, I think, undermines the fabric of our society.

“These rules are, in my opinion, a reflection of our [the UK’s] efforts to send a message to the rest of the world not to come here.” Kweku Adoboli

“We’re on a slippery slope. The judicial review I’m bring against the Home Office tries to highlight that the application of the ‘hostile environment’ to my case over a period of five years has actually removed or diminished my ability to argue the compelling reasons why I should be allowed to stay in the UK. The actions of the Home Office have actually affected my ability to defend myself, and improved their ability to achieve a policy goal.

“I haven’t lived in Ghana since I was four years old. While I’m proud of my dual heritage, I shouldn’t have to choose between the two, and I shouldn’t be separated from the friends and family that are central to my identity that has been created over the period of 26 years.”

Despite his clear personal interest, Adoboli emphasised that he is not the only one to perceive injustice in the current system, highlighting the recent Shaw review, which recommended that the Home Office should no longer routinely seek to deport those born in the UK, or those who have been brought up here since birth.

“The actions of the Home Office have actually affected my ability to defend myself, and improved their ability to achieve a policy goal.” Kweku Adoboli

Despite having argued publicly for change on an institutional level in the financial sector, Adoboli accepts the reality of what occurred at UBS. Ultimately however, he said, “what happened in the bank had nothing to do with my nationality.”

Arguing that he is highly unlikely to re-offend, Adoboli said: “My probation officer, in my most final annual review, said: ‘You actually come out, in term of risk analysis, as a lower risk person than someone who has never committed an offence.’”

Adoboli attributed this to his experience in prison, coupled with the fact he has been free for the past three years and has reacted positively since then. It could also be argued that re-offending may be difficult, considering it is unlikely any financial institution would let the person charged with the biggest financial loss in British history play with billions of pounds again. Nevertheless, Adoboli says, he is trying his best “to do something of value for this country.”

In February of this year, Adoboli criticised regulatory efforts to make senior managers accountable for the wrongdoing of junior traders on their watch, under the so-called Senior Managers Regime. Adoboli supports this by quoting Sara George, a former prosecutor with the FCA, who recently wrote: “The aggressive pursuit of junior employees who followed an unlawful instruction while giving kid glove treatment to senior executives who gave it, is not in the public interest.”

“The truth of the matter is, we live in a society that is driven by extractive capitalism. And until we get to the point where the purpose of these institutions changes, in the end, things like the Senior Managers Regime don’t make a difference.” Kweku Adoboli

“The reality is,” Adoboli argued, “the system is designed to protect the senior guys. For example, if you look at Tom Hayes, Hayes got an 11 year sentence for ‘manipulating’ Libor in a dishonest way, but the Bank of England – which was also manipulating Libor – gets no sanction. The Bank of England says, ‘Well, we were doing it because we were trying to save the financial system.’ When you have a junior trader who’s being told by his senior managers that what he does is critical to the survival of his institution, relatively speaking, the importance of those actions is the same. It’s always the young ones who have to take the rap for it.

“It’s kind of like if you look at politics today. If you look at what’s going on with our current government, or the decisions around Brexit: the more junior you are, the more likely you are to have to resign or take a policy. Amber Rudd took a hit for the hostile environment, which isn’t her policy – that’s exactly the same thing that happens in finance. It’s never going to be the most senior person.”

To Adoboli, the importance placed upon maintaining institutional survival in the finance sector demonstrates that, 10 years after the 2008 financial crisis, the idea of ‘too big to fail’ still persists, both in the banks themselves and in the view of the UK Government: “The struggles we’re going through as a society are very much about trying to figure out how we fix the failures that are ongoing from the financial crisis of ten years ago, and the systems we have in place.

“The truth of the matter is, we live in a society that is driven by extractive capitalism. And until we get to the point where the purpose of these institutions changes, in the end, things like the Senior Managers Regime don’t make a difference. Because if the institution’s purpose is to extract as much profit as they can, pretty much at any cost, then failures are going to continue to happen.”