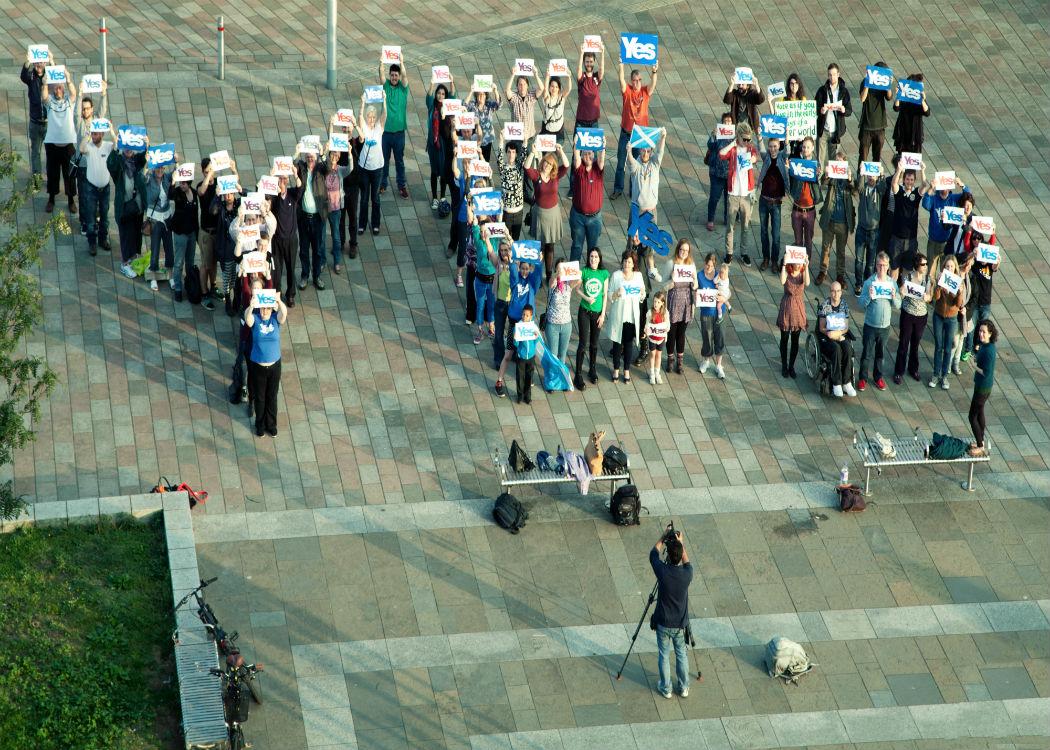 THE FIRST large scale data-set of Yes campaigners has been released, giving politicians, political scientists and commentators a fresh chance to understand the Yes movement phenomenon.

Analysis from researchers Dr Iain Black, head of the marketing group at the school of management and languages at Heriot-Watt University, and Sara Marsden, social researcher and activist with Common Weal Edinburgh North and Leith, have shown that that Yes activists are far to the left of the political centre, and are politically closer to the Greens than the SNP. It also found that 29.2 per cent campaigned with the Radical Independence Campaign.

The survey found that the Yes Campaign was diverse in terms of age, gender and sexuality, though the average Yes campaigner was slightly older and slightly more were men that the general population.

CommonSpace spoke to politicians, commentators and campaigners about the new figures.

“The Independence Campaign started with a ‘business as usual’ whimper and ended with a bang. The only way we could ever win the referendum was to inspire people that a better Scotland was not only possible but that a better Scotland was needed. It was the Greens, and others like the Radical Independence Campaign that brought the ideas, passion and excitement to the independence campaign. So it comes as no surprise that the average campaigner agreed more with the Greens than with establishment parties.

“The Holyrood election is a huge opportunity for Scotland to become better and bolder. We need a bold parliament that reflect the newly emboldened population. We need a parliament that will deliver a more equal Scotland. We need more Green MSPs. But most of all we need to keep believing that a better Scotland is not only possible, but necessary.”

“These findings confirm what is already widely known – that the independence referendum campaign breathed fresh life into Scottish politics and encouraged a huge number of ordinary people to get involved in political activism for the first time.

“Since then tens of thousands of people have joined the SNP and campaigned passionately to elect a record number of SNP MPs and now to re-elect Nicola Sturgeon as first minister.

“The SNP view this democratic engagement as an extraordinary legacy and one that we wish to build upon, for example through our approaches to community empowerment and land reform.”

“As a former Yes Scotland employee, this data on the radical make-up of Yes campaigners comes as no surprise.

“Week after week I worked in the messaging team with radicals, trade unionists and Labour members to promote the case for social transformation.

“But week after week Nicola Sturgeon, Peter Murrell and their strategists stifled and submerged these voices under moderate, corporate-friendly messages.

“The SNP’s wizards could not hold back the radical tide, so they diverted it into tepid channels – more cautious, controlled and ultimately unconvincing.

“I know many campaigners regret that the Yes campaign did not reflect their ambitions for a more socialist Scotland. It could have made all the difference.

“While it’s not surprising that 66 per cent have joined the SNP, the question is whether campaigners’ assimilation to the SNP also changed their ambitions.

“Obviously one of the central premises of RISE and the Green party is that people are still ready to campaign for a socialist alternative.We will see in May whether their efforts materialise into any parliamentary clout.”

“Many of the norms we take for granted in our political system date from a time when women were not involved in politics in any great numbers. In many respects, the Yes campaign was a very traditional political campaign.

“It was based on public meetings, canvassing voters’ views and recording them for future approaches, and adversarial media approaches. Many of the public meetings organised by Yes did not have gender balanced speakers; it was not unusual for Women for Independence to receive frantic, last-minute messages from event organisers because they’d realised they had no women on the platform (and could we please send one).

“Organising meetings were held in the evenings, often in places without childcare, and those able to turn up took control. The media looked to the big beasts of politics – usually male – to comment and argue about the merits of independence. Women for Indy representatives were often dumped from TV broadcasts at the last minute, sometimes even when they were in make-up, because a big male beast had become available instead.

“The Yes campaign could have done more to think about new or innovative ways that women could be incorporated more equally in the campaign. Did Yes really consider that the traditional ways of campaigning often exclude women?

“Women for Indy tried to find new ways of campaigning so that women were better able to participate. For example, our Listening Exercise was something that women could use in their own homes with friends and neighbours. We produced leaflets which addressed the specific issues that women were telling us were important. (Our experience is not that there are ‘male’ and ‘female’ issues, but that often women approach issues in a different way. For example, women are far more acutely aware of how false the demarcation between ‘work’ and ‘family life’ is, especially when someone has caring responsibilities, a burden which falls disproportionately on women.)

“We are not therefore remotely surprised by these findings. We do agree with others that, since September 2014, we have failed to properly analyse the campaign and how we can do it better the next time. We’d love to be part of that, and to have the discussions about how we can redesign our political norms to make them more open to women. We know that the Yes campaign politicised and inspired thousands of women, but that there were still too many who were stuck at home, bearing the disproportionate burden of family and household responsibilities while the men were free to get involved in the daily campaigning.”

Jonathon Shafi: Co-founder and organiser for the Radical Independence Campaign

“This study highlights several important things. Firstly, that the organisational and political role of the radical left was not a fringe element. In fact it became increasingly the mainstay of the campaign.

“The movement itself was also distinctly left-wing in character as attested by the fact that most people involved were taking part because of the radical potential of independence in terms of class, austerity and democracy rather than nationalism. This is the impulse that drove the vote up to 45%.

“If you look back at Yes Scotland it started as a corporate campaign and by the end took on a distinctly anti-Tory, anti-austerity message. Any reversal of this process will lessen support for independence. Triangulation on the right will have a negative effect on the mobilising potential of the movement in the future.

“The radical left will play a central role in the future on the national question, and as we have shown, it’s not an added extra, but fundamental to both winning independence, and shaping the sort of independence working class Scotland needs in an era of austerity and crisis.”

“One of the big battles of the post-referendum era is the battle to define what happened and why it happened. Much of the anti-independence side have tried to suggest that the campaign was driven by anti-English sentiment or that it was a kind of small-minded narrow nationalism that was the motivation. These claims are entirely political and not based on any observable data. It is therefore brilliant to have some solid, properly methodological data from a respected academic which challenges this story.

“The independence movement was overwhelmingly a movement for social justice and democracy. It was diverse and to claim that it was controlled by the SNP or that it was just a front for the SNP is simply not borne out by the evidence two out of three activists joined the party after the referendum, not before or during it.

“If Scotland is cajoled into remembering that two-year period as one of divisive, anti-English fury, not only with that memory be wrong, it will be a travesty of what happened. The Indyref was a battle for a better society – or at least it was in the eyes of those who campaigned for a Yes.”

“These figures put flesh on the bones of what we already know, but they are still quite a remarkable picture of our changing politics. The fact that the independence movement was motivated by and to the left of both the SNP and the Greens is significant, as is the extraordinary figure that 39 per cent of independence campaigners participated at least once in the Radical Independence Campaign. That’s surely at some point going to manifest itself in a political expression – whether that’s in a more radical approach for the SNP or in the new presence of the Greens or Rise.

“The figures do also put paid to the tiresome re-tread arguments that the politics of Scotland are indistinguishable from elsewhere in the UK. What we need now is these ideals to be translated into actions for social justice, equality and ecology.”

“This study confirms our analysis that there exists a political space for the radical left in the Scottish parliament. It turns out that a sizeable section of independence campaigners have views which coincide with ours. But it is also notable that much of this energy has gone to the SNP.

“The SNP leadership, if anything, has de-radicalised its rhetoric and policy platform since 2014. The Council Tax is a prime example of this. We feel it is vital for both the prospects of winning a new referendum and for maximising the political awakening stemming from the referendum of 2014 that there is a pro-independence force on the radical left, built from the social base this study clearly identifies, able to take its message into Holyrood.”

“The data suggest that most yes campaigners sampled were to the left of the SNP and the Greens, with a surprisingly large number involved in Radical Independence events or canvasses – yet two thirds of this ‘lefty’ group went on to join the SNP.

“It’s a bit of understatement to say this left-leaning group has not made its presence felt yet in terms of the SNP’s policy direction – apart from the memorable rejection of the leadership’s cautious position on land reform at last year’s conference.

“Interesting too that social and economic justice topped political motivations for yes campaigners – it confirms that No voters were a lot less likely to be won over by these issues. Indyref2 will have to make sure jobs, economic prosperity and cultural identity are woven into the mix too.”