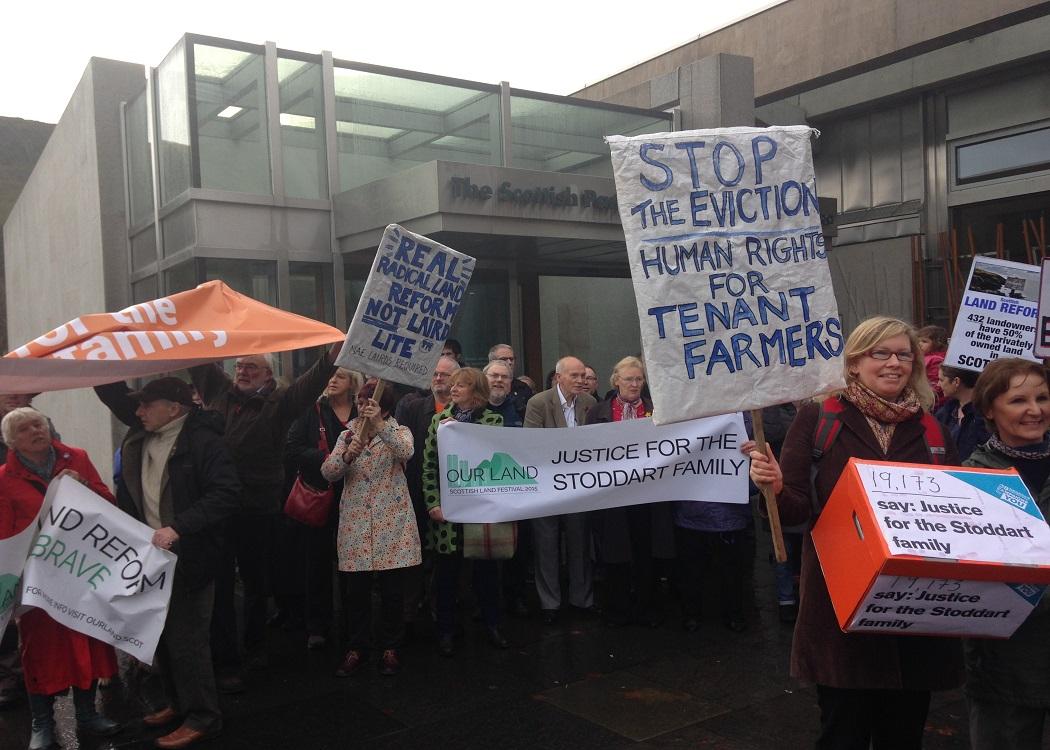 PROTESTERS have gathered outside of the Scottish Parliament hoping to convince the Scottish Government to halt the eviction of farmer Andrew Stoddart .

Stoddart, a tenant on the Colstoun Estate near Haddington, has just two weeks left until he and his family must leave the farm he’s worked at for 22 years – unless ministers take action.

Their three primary-age children face moving to a different area, along with the four children of the Stoddarts’ farm employees.

Organised by Our Land, 38 Degrees and the Living Rent campaign, the protest was held in order to deliver a petition to the Scottish Government. Set up just nine days ago, the petition has attracted over 19,000 signatures and demands the government take action to stop the eviction or at least compensate Mr Stoddart for the years of work and investment he’s put in to the farm.

Michelle Wood, a former neighbour of Stoddart’s, started the petition on campaign site 38 Degrees. She told Commonspace: “I started the petition because someone had to. Everyone I spoke to in Gifford was really upset for the Stoddarts, so I knew there was support for them. It is obvious to me that what is legal is not always the same as what is right.”

Director of Common Weal Robin McAlpine highlighted the wider issues surrounding the case, saying: “The fact that the Andrew Stoddart case has gathered so much public sympathy shows just how emotive the issue of land ownership in Scotland has become.

“This is a problem not just for families like Andrew’s but for all of Scotland. Economic and social development is being held back by people’s lack of access to affordable land and the Scottish Government must be bolder in tackling this problem.”

The farm at Colstoun Mains is owned by the Colstoun Trust, which issued a statement to coincide with the protest. The Trust quoted Stoddart’s factor, Sir Francis Ogilvy, as saying: “Mr Stoddart will not be made homeless.”

Complications around the case arise from the fact that Stoddart had no choice but to enter into a limited partnership when he took on the farm. Limited Partnerships were a way of circumventing tenant rights, giving landlords the right to dissolve the ‘agreement’ at any point.

The question of what happens to tenant farmers facing eviction and loss of investment under these agreements has long troubled the Scottish Government. Stoddart’s case illustrates the complexities of the situation.

Also present were activists from the Living Rent Campaign, who have been lobbying the government on rent controls and tenant rights.

A spokesperson told Commonspace: “We were happy to support Andrew today, in his bid to get justice from his landlord. Land reform is not just an important issue for tenant farmers, but for all tenants.

“Concentrated land ownership in Scotland means that land for housing is scarce, and expensive. If we reform this system then this would enable more affordable housing developments, which in turn would help reduce rents, and give tenants a choice of where to live.”

Our Land campaigner Lesley Riddoch, who has written about the Stoddarts’ case in the media, put the case forward for the government to intervene as soon as possible.

She said: “Andrew Stoddart and his employees have worked and improved the land at Coulston Mains in East Lothian for 22 years. They and their families all face eviction in 18 days with scant compensation, a result of landowner sharp practice and badly drafted legislation by a previous Scottish Government.

“It’s surely the responsibility of this Scottish Government to intervene and demonstrate that the days of arbitrary evictions are over.”

Stoddart and supporters will meet with government ministers soon to reach a resolution.