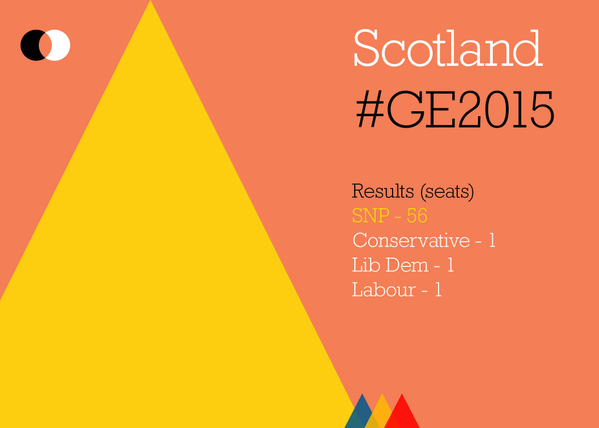 After a night of electoral flux, CommonSpace tries to thread together an election which has transformed Scotland – but returned the Tories in England

Winning exactly half the popular vote (50 per cent), the party swept 56 of the country’s 59 seats.

The size of the swing to the SNP broke all electoral records.

However, it’s unclear what the SNP will do at Westminster now that the Conservatives hold a majority.

2) Labour vs Tories in England

Ultimately the election came down to competition between Labour and the Conservatives in England.

Labour failed. The Conservatives gained seats from Labour, including the seat of shadow chancellor Ed Balls.

Confounding the pre-election polls, the Tories won by 37 per cent to 31 per cent of the popular vote.

That was enough for the Conservatives to pass 326 seats and claim a majority of the seats across the UK.

The Lib Dems suffered their worst result ever. Just eight seats were returned for the party, making them a complete irrelevance in the new parliament.

Paddy Ashdown promised to ‘eat his hat’ if the exit poll suggestions of a Lib Dem implosion came to pass.

In the end the result was even worse. The party will be the joint fourth largest party in parliament.

4) Ukip and Greens fail to make an impact

The UK Independence Party and the Green Party won almost five million votes between them – a huge increase on previous elections.

However, due to the first past the post electoral system, both parties failed to make gains in parliament.

Ukip actually went backwards, losing one of its two MPs. Nigel Farage failed to win his seat and resigned as leader.

The national voting success of the parties will put voting system reform back on the agenda.

The gap between voters in Scotland and voters in England has never been larger.

Scotland looks set to be governed by a Tory government (again) while the party has only one MP in the country.

Already campaigners are saying that this increases the likelihood of independence, as Conservative policies will lack a democratic mandate in Scotland.

Whether concessions are given to Scotland by a Conservative government remains to be seen.