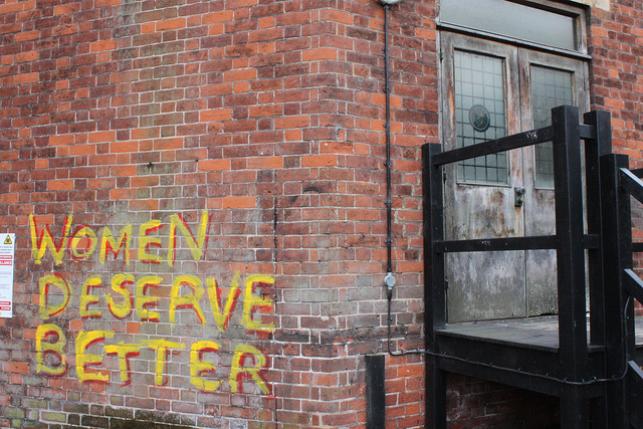 8 MARCH IS International Women’s Day (IWD), and this year people across Scotland are coming together to host a range of events and activities to highlight ongoing gender inequality and ‘Press for Progress’ – the United Nations’ theme for the day.

From strike action, to celebrations, to the launch of new campaigns and initiatives, women in Scotland are putting the spotlight on the changes they feel are needed – in the workplace, in wages, in political representation, in access to sanitary products, in reproductive rights, in the division of labour at home, and in a whole host of other areas of life.

CommonSpace spoke to some of the organisers to find out what they’re doing and what they hope to achieve.

Taking place on The Mound in Edinburgh at 6pm on Thursday, a rally will highlight and celebrate women’s strike action as part of an international movement, featuring entertainment for adults and kids and a range of speakers with expertise in abortion rights, the gender pay gap and violence against women.

The event has been organised by Gals for Gals Scotland, a campaign set up by Polish women in Edinburgh in solidarity with women in Poland whose reproductive rights were under threat from a right-wing government, and and the Women’s Strike Assembly UK, which was established in December 2017.

“One is to find ways to strike properly, the other is to establish women’s struggle as a well defined collective struggle which will continue to grow after this year’s IWD and will lead to more strikes and ways of intervening with the “business as usual” in the capitalist societies of the UK and abroad.”

To this end, the Women’s Strike Assembly UK has produced a varied and creative list of ways to strike.

The Edinburgh groups hopes to create its own assembly bringing local women’s organisations together to develop collective action throughout the year.

Because one day for women is simply not enough, Govanhill Baths are hosting a four-day International Women’s Day festival from 7-10 March.

Entitled ‘Women and the 21 st Century Environment’, the festival kicked off on Wednesday with an exhibition and talk from Free Period Scotland on the issue of period poverty.

Thursday will feature workshops on the environmental impact of menstrual products, poster making, and how to make your own pants. Friday and Saturday will present two one-woman shows respectively: Confessionals by Victoria McNulty, and The Drift by Hanna Lavery.

Fatima Uygun, trust manager at Govanhill Baths Community Trust commented: “At Govanhill Baths we believe that International Women’s Day should be true to its origins and be a political event dealing with political issue that are important to women today.

“We are delighted to be working with Free Period Scotland and Women for Indy, as this is one of the crucial issues facing women today. The programme includes workshops looking at the environment and two great one-woman shows covering issues such as racism and domestic violence.

“We hope women from across Glasgow can join our festival.”

Taking the campaign for women’s equality into the digital sphere, feminist organisation Engender is coordinating a day of social media action using the hash-tag #MakingWorkVisible. Throughout Thursday, the organisation will share women’s accounts of their day’s work – paid and unpaid – in a bid to highlight the often invisible responsibilities shouldered by women.

“Women make up both the majority of carers in employment and those who provide care for more than 35 hours a week. Women who care are less likely to be in paid work than men of the same age.

“Today on social media using #MakingWorkVisible and at a designated website, we are curating women in Scotland’s accounts of days in which they work in the formal labour market, but also plan meals, buy groceries, do laundry, collect medicines for family members, provide personal care for children and older people, cook, clean, and manage their households.

“Although women’s paid work has substantially increased over the last hundred years, we haven’t seen a balancing increase in men’s unpaid work. There is no reason, except cultural stereotypes, why women should do so much more domestic and reproductive labour.”

You can find all the stories and tweets on the MWV site.

Organised by the Aberdeen Trades Union Council (ATUC), a rally in the Castlegate will begin at 6.30pm featuring a packed line up of speakers including President of CoSLA Councillor Alison Evison, Gaelic TV presenter Christina McGonigle, and speakers from ATUC, Unite, Unison, and the WASPI campaign.

Speaking ahead of the event, ATUC Vice President said Kathleen Kennedy: “There are many challenges facing us as women as we continue the struggle for equality.

“We know that gender parity won’t happen overnight. However, the good news is that across the world women are making positive gains day by day.

“Plus, there’s a very strong and growing global movement of advocacy, activism and support which we are continuing in the North East of Scotland.

“We are calling on all women and the men who support our struggle for equality to join us at our rally on 8 March.”

A night of entertainment to celebrate International Women’s Day at The Dog House in Edinburgh has been organised by feminist organisations the WomenBeing Project and the Empower Project.

Monica Martins, managing director of WomenBeing said: “On IWD, we partnered with the Empower Project in the organisation of an event for celebrating the achievements of women all over the world, but also to remember that many women everywhere still live in poverty.

“In today’s event, we are focusing on the fact that one in 10 girls in the UK are unable to afford hygiene products.

“WomenBeing believes in international women rights, and we believe that as privileged individuals, we have the obligation to support the ones in need, and that’s why we create online and offline strategies that help to understand stereotypes and misconceptions related to feminism, not only on IWD.

“Women have made incredible achievements, but we need to continue work to improve the lives of women in need. IWD events are important to celebrate, but also need to remind us that even if we are in a comfortable position, there are many women who are not.”

To mark IWD, political representation campaign Women 50:50 is launching a new badge with Girlguiding Scotland called “Citizen Girl” which will deliver political education to all girl guides across Scotland.

Talat Yaqoob chair and founder of Women 50:50 said: “I’m delighted that Women 50:50 and Girlguiding Scotland are working together to create the next generation of political activists and women politicians.

“With women being only 35 per cent of MSPs and 29 per cent of councillors, these activities are incredibly important; we empower and engage girls and young women to find and use their political voices whilst challenging and changing political systems through campaigning for quotas and culture change.”

Students and staff at Aberdeen University are joining in strike action for IWD in protest against gender discrimination, the preference of men for executive positions, sexual harassment on campus, and transmisogyny, as well as the wider ongoing dispute around pension cuts.

Students picketed on Thursday morning to highlight the issue of sexual harassment, and following this they will participate in a teach-out in collaboration with UCU and Aberdeen Feminist Society, where they will discuss classism and trans and queer exclusion in the feminist movement.

School of Social Science Convenor and Undergraduate Equality and Diversity Representative Mia Jensen explained: “As a woman and a feminist scholar wanting to work in the gender field, International Women’s Day is one of the moment important days of the year.

“One of the most important things about human rights – regardless of the area we focus on – is that we must never take them for granted.

“I’m looking forward to standing in solidarity with women and non-binary people the 8th.”

Scotland Women in Technology, an organisation which works to support the representation of women in the technology sector, will host concurrent panel discussions for IWD at The Times and Sunday Times in Glasgow and at Sopra Steria in Edinburgh.

Taking place on Thursday evening, both events will hear from women with experience in the technology sector, and will explore this year’s IWD theme, “Press for Progress”.

A spokesperson for Scotland Women in Technology said: “For international women’s day we are running two events at the same time in Glasgow and Edinburgh with leading women in the technology sector, who can inspire others and remind us that women in tech need not be an anomaly.

“We are dedicated to celebrating, championing and investing in women not just on International Women’s Day, but every day and our forthcoming events with secondary schools across Scotland to inspire the next generation of tech women and our national awards will ensure we are pressing for progress beyond today.”

Staff members and artists in residence at the Scottish Sculpture Workshop (SSW) are striking on Thursday in support of the international strikes taking place.

Yvonne Billimore of SSW said: “We are doing this in solidarity with those calling for gender equality, equal pay, labour rights and an end to gender violence.

“During this strike day, we will spend time together on Creag nam Ban (Hill of the Women) discussing a range of questions we are wrestling with within our work, practice and personal lives.”

Also timed for IWD is the much anticipated official unveiling of the Mary Barbour statue on Govan, which commemorates the activist’s pivotal role in working to improve tenants’ rights.

The opening ceremony on Thursday was attended by local MSP and minister for transport Humza Yousaf.

Organised by Glasgow Unity Centre, a protest will take place outside the Home Office in Glasgow in support of the hunger strikers in Yarl’s Wood detention centre. Over 120 women at the centre have been refusing food for over two weeks in protest against the conditions in which they are being held.

Starting at 4pm on Thursday to mark IWD, the protestors are calling for an end to “institutionally racist detention conditions”.

Women are invited to view a film screen, participate in a debate and take part in a “feminist “memes workshop”, while a feminist art exhibition by artist Marta Giron will also feature.

Meanwhile, men who are members of the group will look after the children and will take them to visit the Scottish National Museum or play in the Meadows, dependant on the weather.

Organised by the Scottish Women’s Convention, an event marking International Women’s Day will take place at the Scottish Parliament on Saturday 10 March, starting at 12.30.

Under the theme of ‘The Centenary of our Vote’, the event will bring together, organisations and individuals to celebrate women’s achievements and consider how to increase participation of women in politics.