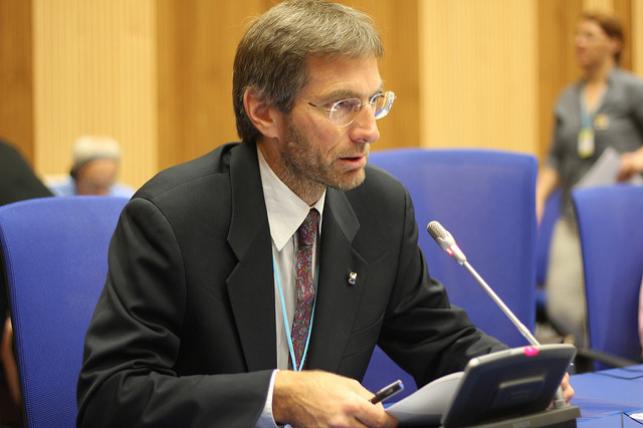 Ahead of the UN signing of the Treaty on the Prohibition of Nuclear Weapons, CommonSpace discusses disarmament with Nobel Peace Prize-winning activist Dr Tilman Ruff

THE TREATY ON THE PROHIBITION OF NUCLEAR WEAPONS was passed by the United Nations in July after being voted for by 122 countries, making it the first legally-binding international agreement to eliminate nuclear weapons.

This historic development came about amid heavy opposition from the nuclear-armed states and rising tensions between the United States of America and the Democratic People’s Republic of Korea, who have warned that recent sanctions will only accelerate the North Korean nuclear programme.

On 20 September, the ban treaty will be open for signature at the United Nations headquarters in New York. Once the treaty is ratified by at least 50 countries, it should come into force within 90 days.

One among many of the anti-nuclear activists who brought the treaty to this point was Dr Tilman Ruff, co-president of the International Physicians for the Prevention of Nuclear War, which collectively received a Nobel Peace Prize for their efforts towards disarmament in 1985, and founding member of the International Campaign Against Nuclear Weapons (ICAN).

Following his speaking engagement in Edinburgh earlier this month at an event organised by Scrap Trident and the Scottish Campaign for Nuclear Disarmament (SCND), where he discussed the devastating human and ecological cost of even “limited” nuclear war, CommonSpace spoke with Dr Ruff about the treaty, the opposition its proponents have faced, and political strategies towards disarmament.

Despite the success of the treaty, Dr Ruff warns that progress is not being made quickly enough. “In the face of nuclear dangers that are clearly growing, with no real substantial progress for disarmament underway or even talked about at this point, and with flashpoints around the world where the rhetoric is becoming more aggressive and more around explicit threats to use nuclear weapons, certainly the dangers are growing,” said Dr Ruff.

“If nuclear weapons are maintained, eventually they will be used.“ Dr Tilman Ruff

He added: “So the progress we’re making is lagging badly, and really needs to escalate. It’s abundantly clear that if nuclear weapons are maintained, eventually they will be used.

“There’s some real urgency about this, but I think in some ways the hope is born out of the growing danger.”

Discussing how the treaty came about after so many years of stalled progress, Dr Ruff indicated that a change in attitude had taken place on an international scale, he said: “There’s a widespread appreciation by most of the world’s governments that nuclear disarmament is not happening.

“The nuclear armed states are not fulfilling their obligations almost half a century after the NPT (Non-Proliferation Treaty) was concluded and formally enshrined in international law.

“There’s enormous frustration about that, and that’s certainly been a drive for the ban treaty, and I think that’s why it could be achieved so quickly and decisively.

“There’s a way for every state to join this treaty. No state can say ‘It’s not relevant to us.’” Dr Tilman Ruff

As a world-renowned expert in his field who has been campaigning against nuclear weapons for over 30 years, Dr Ruff believes “the treaty really is quite strong. It’s a clear, categorical rejection of nuclear weapons, but it does also anticipate the desire to use this opportunity not just to create a formal legal prohibition, but to encourage and map out the path towards elimination.

‘There’s a way for every state to join this treaty. No state can say “It’s not relevant to us.” Whether you’ve had nuclear weapons, have them now, have them stationed on your soil, or are aligned with a nuclear armed state, there are pathways for you to join.”

The treaty was formulated with historical precedents in mind, Dr Ruff explained. “We’ve seen with the other weapons prohibitions, how significant their impact has been, even for the states that haven’t signed them, and how for every class of inhumane weapon, the pathway has been: prohibit, enshrine that norm in law, and then progress to elimination.

“It is very hopeful that approach is now being applied to nuclear weapons. But the harder work of using that to drive elimination is what we all face.

“There’s always a danger after a success has been achieved, especially when it’s been such a focused campaign that’s galvanised lots of people, that people will sit back and the pressure will wane.”

In his Edinburgh speech, Dr Ruff spoke of the pressure many UN member states had faced from the nuclear armed nations not to vote for the ban treaty, describing dirty tricks and “chequebook diplomacy”. Asked to elaborate, Dr Ruff said: “For me, that pressure has been very real, and some countries have been unable to resist that. But in the end, it hasn’t been decisive, and that’s a good thing.

“If this treaty didn’t matter, if it was another UN resolution, another one of the many fine sets of words that languish unimplemented around nuclear disarmament, I would be much more concerned.

“But the fact that the nuclear armed states see this treaty is important, that they oppose it, and have urged their allies to also oppose it – I think that’s testament to how much the treaty matters.”

“There’s every indication there will be a large number of states signing on 20 September, and I think the goal of around 100 signatures by the end of this year is pretty realistic.” Dr Tilman Ruff

Describing what he knew of the pressures imposed by the nuclear-armed states, Dr Ruff said: “I’m only aware of the tip of the iceberg. Only South Africa was willing to speak up and say there had been relentless pressure, but we know many countries got very strong pressure – a division of labour amongst the nuclear-armed states, with France taking responsibility for the Francophone West African states, the US doing the same for Latin America, in particular.

“Given that the treaty now exists, the issue isn’t going away, and I hope the strong global majority that supports this – pretty much all of the states apart from the nuclear-armed ones and their allies.

“The numbers are overwhelming. Certainly, for individual governments, there may well be consequences and further pressure, but I think the cat’s out of the bag now. And there’s every indication there will be a large number of states signing on 20 September, and I think the goal of around 100 signatures by the end of this year is pretty realistic. I don’t think this is now stoppable.

“I take great encouragement that during the vote in the general assembly last year that mandated the negotiations, in first committee there are 123 states in support, and at the final vote in July, there were 122. There were a couple that came and a couple that went, but the fact that the number is virtually identical is a great encouragement that pressure from the nuclear-armed states was not decisive, and won’t be in future.”

Between the decade of anti-Trident SNP government in Scotland and the rise of unilateral disarmament advocate Jeremy Corbyn as Labour leader (though Labour formally remain committed to Trident), opposition to nuclear weapons remains a prominent part of British political discourse. Discussing what can be done on a national scale, Dr Ruff argued: “We need strong domestic legislation to implement countries’ commitments under the treaty, which will roll on to develop and enhance the treaty further. The treaty is a first step.

Asked whether political parties’ positions on nuclear weapons should be at the forefront of voters’ minds, Doctor Ruff answered: “I would hope it would again become so, as it was a significant factor in earlier decades.

“It’s obviously only one of the many issues people think about when they vote, but it is crucial. The impact of the treaty we can already see – for example, in the willingness of the leader of the Social Democratic Party (SPD) in Germany to come out very strongly in support of the removal of US nuclear weapons in Germany.

“The fact that’s clearly being articulated by the alternative leader in Germany is probably a direct result of the ban treaty.

“This is not just an idea now. This is a treaty. It exists – what are you going to do?

“If you say you’re serious about disarmament, what’s your alternative, irreversible, time-bound, verifiable plan for disarmament? And if you haven’t got a credible one, you should be thinking about this treaty.”

Picture courtesy of the International Campaign to Abolish Nuclear Weapons