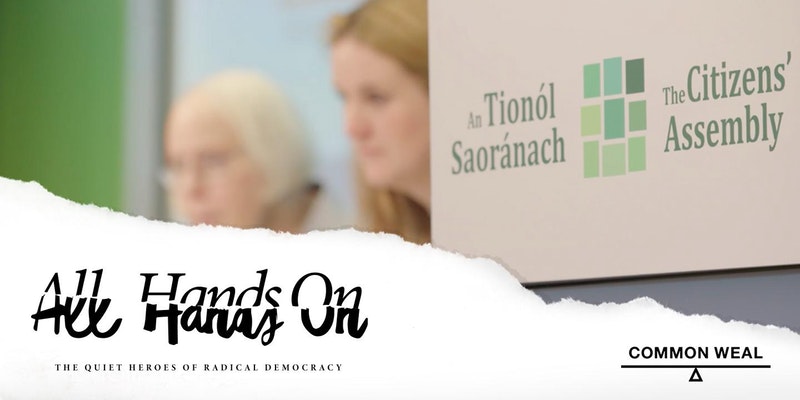 WHEN CITIZENS ASSEMBLE, a short documentary film about the Irish Citizens’ Assembly will be screened by the Scottish Government on March 7 in Edinburgh and by think tank Common Weal on March 8 at the University of Strathclyde.

The film, directed and produced by Scottish journalist and author Patrick Chalmers, focuses on the Assembly’s effectiveness in building consensus on the politically divisive issue of abortion, and promises to be the first in a nine-part series – All Hands On – exploring how democracy might be improved through the use of public juries.

Chalmers will be taking part in a panel discussion and Q and A following the screenings, alongside Dr Roslyn Fuller, renowned democracy academic and author of Beasts and Gods: How Democracy Changed Its Meaning and Lost Its Purpose, and Maia Almeida-Amir, an intersectional feminist activist who took part in the UK Citizens’ Assembly on Brexit.

READ MORE: How democracy could be better off without elections – and why Scotland might be well placed to prove it

Speaking ahead of the events, Chalmers told CommonSpace: “Screening this film in Scotland is a great opportunity to present a real-life case study of how politics could be done differently. Using random selection and deliberation, much like what we do with jury service, puts political questions to everyday citizens.

“It lifts political questions away from the baked-in conflict of party politics, where politicians must forever get one over their opponents. Random selection could work brilliantly for the Scots, helping people find common ground with others even when they don’t agree on everything.

“Assembly participants get to meet and discuss politics with people they might not usually meet. They get unfiltered perspectives that can change their minds on a topic or at least deepen their understanding.

“What struck me filming the Irish participants was their quiet pride in the process. Some said their positions moved over the course of time, which is remarkable enough in politics. It was interesting to see that some of the politicians moved their positions too, even the prime minister did.”

Last month, Chalmers spoke to CommonSpace in detail about the documentary series and why he feels a radical overhaul of the democratic system at the local, national and global level is so badly needed.

Ultimately, he argued that while he personally supports independence for Scotland, the root of the democratic deficit cannot be addressed without a change in the process of decision making itself – for example through the introduction of a second chamber comprised of randomly selected citizens, as proposed by Common Weal earlier last year.

Maia Almeida-Amir said ahead of the event: “I’m looking forward to taking part in this panel. As an activist and as a student of politics, rethinking the ways our societies practice governance has interested me in many different ways.

“My experience participating in the Citizens’ Assembly on Brexit helped to solidify some of those interests and some of my ideas, which I hope can be of use to those attending the screening and discussion.”

Dr Roslyn Fuller, who is featured in When Citizens Assemble, told CommonSpace: “What the assemblies excel at is not so much getting people to change their minds on topics, as on by-passing the electoral process in which politicians either take or refrain from taking an action because they fear losing a small but important number of voters by doing so.

“In that case, a minority can keep an item off the agenda, that may in fact, enjoy majority support.

“This is a great strength of using randomly selected bodies to pre-debate issues and set recommendations for referenda.”

Fuller explained that, contrary to any fears that a Citizens’ Assembly system would mean that legislation would be directly passed by randomly selecting small groups of people, the model in Ireland is similar to that used by the ancient Athenians, which was to have “a very large randomly selected group set the agenda – based on citizen submissions – and then for the public at large to work down, debate and decide the items on that agenda”.

READ MORE: ‘Of the people’: 5 ways a citizens’ second chamber could democratise Scotland

Among the benefits of this, she suggested, is that it demonstrates that “the average person is not a ravening barbarian incapable of thought”, and makes clear that there is a greater degree of consensus on most issues than is typically allowed for by politicians and the media which “thrive on generating conflict”.

The entrenched divisions of political parties, she said, are not automatically reflected in a Citizens Assembly, so there is greater flexibility to take positions on an issue-by-issue basis.

Furthermore, Fuller explained: “What Citizens’ Assemblies and Constitutional Conventions can do very well is surface issues that are not being addressed by political parties, but for which there is a significant level of support in the citizen population, and prepare the groundwork for a society-wide decision by whittling down options.”

When Citizens Assemble was produced with support in cash and kind from the newDemocracy Foundation and Common Weal. Campaigns Officer for Common Weal, Max Wiszniewski said in advance of the Glasgow event: “It was this time last year Common Weal launched a detailed paper on setting up a Citizens’ Assembly for the Scottish Parliament.

“A year on we’re launching a short screening and panel discussion about how this idea has worked in practice in Ireland – showing how an idea that’s seemingly radical, can radically transform into something that’s completely normal.

“It’s these kind of democratic initiatives that will be uncovered by this film series and this first event in Glasgow should be an impressive beginning to a wider national/international discussion.”

The first screening and discussion will take place at 2.30pm on March 7 at Victoria Quay, and the second will start at 6.30pm at University of Strathclyde on March 8.

Picture courtesy of All Hands On