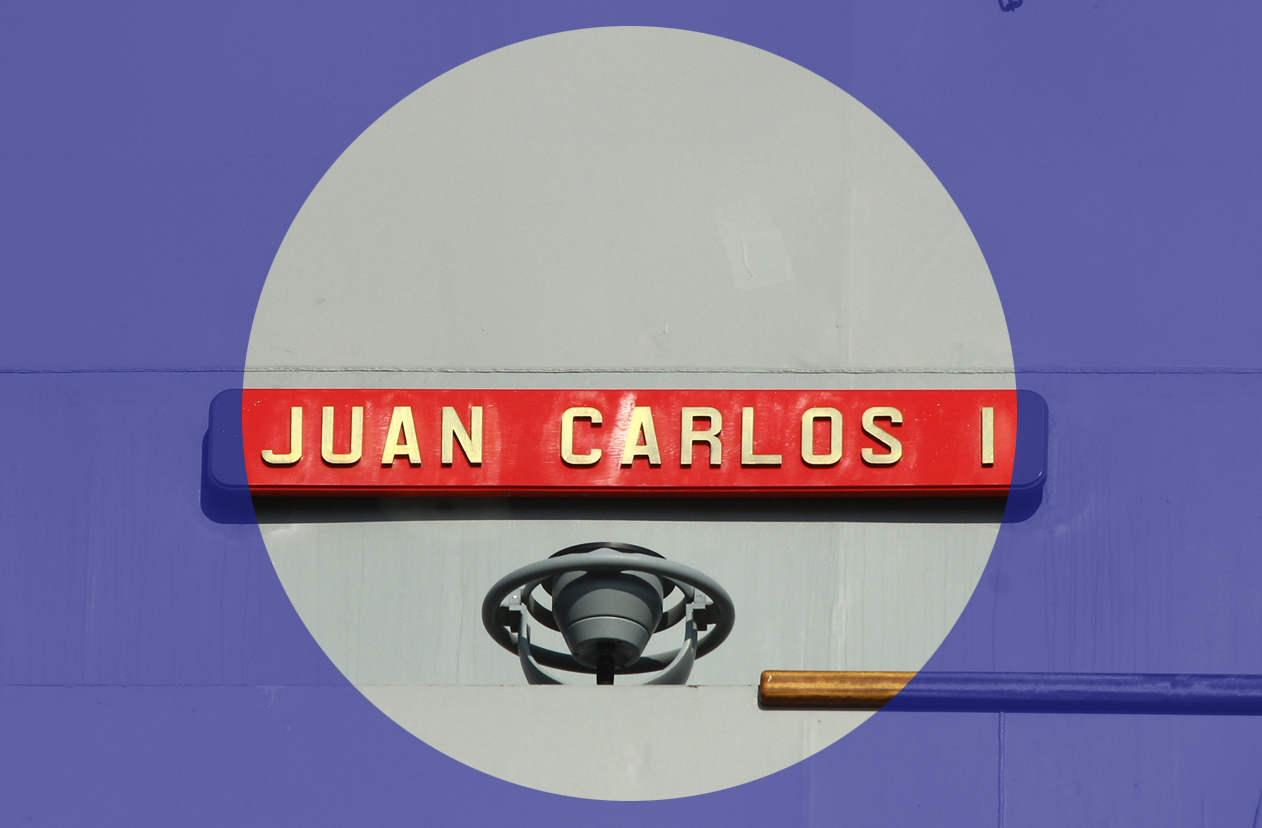 “El Borbón a prisión!” That was the shout of a small group of protestors in Madrid on Sunday [9 August], after the self-exile of Juan Carlos I of the House of Bourbon, who is under investigation for corruption charges in Switzerland and Spain. The protest was small because Spain is in its holiday season, but […]

That was the shout of a small group of protestors in Madrid on Sunday [9 August], after the self-exile of Juan Carlos I of the House of Bourbon, who is under investigation for corruption charges in Switzerland and Spain. The protest was small because Spain is in its holiday season, but no one is in any doubt that the anger in Spain is rising at the corruption and lack of accountability of the Bourbon regime.

According to reports, Juan Carlos is currently in Abu Dhabi, having an operation, after previous reports suggesting he was either in Portugal or the Dominican Republic. He is being chauffeured around in an armoured limousine, according to the latest ‘Where’s Wally?’ style report in the Spanish press on the former king’s movements.

“It was also the Sheikh of Abu Dhabi who gave the Spanish royal family two Ferrari cars, among other gifts, and it is the country in the world where Juan Carlos feels most secure,” a piece in ‘Lecturas’ reads. This is not your typical fraudster on the run.

Juan Carlos claims he will still make himself available to prosecuting authorities despite leaving, but if that’s the case then why leave? Reports suggest King Felipe, who he abdicated the thrown to in 2014, wanted Carlos’ gone to prevent any more reputational damage to the monarchy, but if that was the case it was a spectacular misjudgement: the self-exiled ex-king has become the centre of media attention.

Corruption surrounding the Bourbon’s is not new. His 2014 abdication was connected to an embezzlement scandal involving Juan Carlos’ daughter Cristina called the ‘Urdangarín affair’. Indeed, the Saudi connections at root of the present scandal go all the way back to the first days of the post-Franco dictatorship era, in which Juan Carlos has been lauded for his role in ‘the transition’ to democracy.

As Eoghann Martin writes on Jacobin, separating “the Juan Carlos of the transition from that of the later scandals makes no sense when we examine the initial payments he received from Middle East royal families shortly after assuming the throne”.

Martin continues: “This included a $100 million interest-free loan in 1977 from the Saudis, of which there is no record of any repayment. This was followed in 1979 with an agreement over the importation of Saudi oil to Spain, with Juan Carlos earning a commission for each barrel of crude that was delivered (and from which he is believed to have earned a total of $5 million). Also significant was the $10 million in illegal funding he organized for Suárez’s 1977 election campaign, coming from the Shah of Iran. This was a clear act of interference in the country’s first democratic elections — indeed, in Juan Carlos’s written request to the Shah, he said the cash would save Spain from ‘Marxism’.”

This throws the transition and Carlos’ role in it into a different, less flattering light, where the rot of the clientelism – which has been a feature of numerous political corruption scandals involving the two establishment parties, PP and PSOE, since the transition – starts at the top of Spain’s constitutional monarchy. As Blanca Serra I Puig has written in Ignasi Bernat and David Whyte’s edited collection ‘Building a New Catalonia’, crucial to the Spanish state maintaining control of the transition was “the House of Bourbon being restored at Franco’s request”.

“There was no referendum on the monarchy, but, following the [failed] military coup of 1981 there was a propaganda campaign relating to the monarchy and its role in the coup (do not forget: the king was the head of the army), and the Bourbon king was referred to as ‘the saviour of democracy’,” Puig writes. “This operation was successful to the point that the nefarious and predatory essence of this dynasty has shown the need for a democracy without it.”

After his abdication, Juan Carlos no longer had the legal immunity granted to a Spanish king, meaning his misdeeds were suddenly vulnerable to prosecution. When earlier this year The Telegraph revealed that King Felipe was in line to be the main beneficiary of a €65 million offshore fund of Juan Carlos’ upon his death, the new King had to renounce inheritance of his father’s wealth. Extracting Carlos’ dealings from the House of Bourbon as a whole appears increasingly difficult, but it is a strategy Spanish Prime Minister Pedro Sánchez appears dedicated too. Following Carlos’ exit – who remains ‘king emeritus’, having not renounced his dynastic rights – Sánchez said: “institutions aren’t judged, people are judged”.

The ‘bad apple’ approach is tried and tested, but Sánchez – who is committed to PSOEs unbending, dogmatic adherence to Spain’s constitution – has coalition partners in the shape of left party Podemos who came into existence promising to root out the institutional corruption of the Spanish establishment. It could not fail but take a more critical line.

“The Spain of the 21st century no longer tolerates corruption and privileges,” Podemos leader Pablo Iglesias has said. “Any citizen who commits crimes must face justice.”

The tension over Juan Carlos’ fleeing is yet another case of Podemos’ very junior partner status in the coalition government being shown up. Podemos were apparently cut out of Carlos’ self-exile plans, claiming only to have found out once the decision had been publicly announced and the ex-King had safely exited Spanish soil. Beyond increased welfare support for the poorest Spanish citizens, Iglesias’ party have little concrete wins to show so far since entering office in January, while the country has, according to Johns Hopkins University, suffered the worst impact of the pandemic of any in Europe, just pipping the UK to that unwanted title.

History suggests it’s usually the weaker party in a coalition government which suffers most at the ballot box. Basque and Galician regional elections in July have already shown the political danger for Iglesias: Podemos’ vote fell off a cliff, with both electorates moving to left pro-independence alternatives. With the country facing its most severe economic crisis since the Spanish Civil War and a weak financial package agreed with the Eurozone, victories on the economic front will be hard to come by for Podemos, which joined the coalition based on an analysis that Spain was entering a “certain stabilisation after the previous crisis decade”, according to former MP Manolo Monereo.

It’s in battles over the nature of the Spanish regime that political progress will have to be evidenced, especially if Podemos want to win back support in the restless nations in the north of Spain. It’s been reported that the key to Carlos’ exit is surveys carried out by the royal household showing crashing support for the monarchy, especially among under-45’s. That’s the demographic Iglesias needs to retain support with. Being seen to respond to the Bourbon’s corruption with little more than posturing may be fatal for the leftist formation.

Carlos’ self-exile may be welcome relief for the pro-independence Catalan government, which has been struggling to contain a resurgence of Covid-19 in the north-eastern nation. Alluding to the forced exile of Catalan independence leaders after the illegal 2017 referendum, vice-president Pere Aragones has said: “While some go into exile for defending democracy and calling a referendum, others do it because they’re corrupt, like Juan Carlos I.” Catalan President Quim Torra has criticised the PSOE-Podemos government for allowing the king emeritus to leave the country.

The two largest Catalan independence parties, ERC and JxCAT, have been at loggerheads over strategy towards the new PSOE-Podemos government, with ERC seeking negotiation while JxCAT have taken a more uncompromising stance. Elections were set to be called before the pandemic hit, with a revised date of early October now unlikely duet to the second wave of the virus. Former Catalan President Carles Puigdemont, who fled after the 2017 referendum, has just been elected as the new JxCAT’s President, in a complex split with former coalition partners PDeCAT. The danger of the independence movement fracturing into warring factions is real.

Re-energising its critique of the ’78 regime in light of Juan Carlos’ self-exile could therefore be a chance for the movement to get on the front foot again. To do so effectively, it will need to prise open the divisions in Madrid over what do about the ex-King. Unite republicans across the Spanish state for a referendum on the Spanish monarchy may be a fruitful endeavour right now for the independence movement.