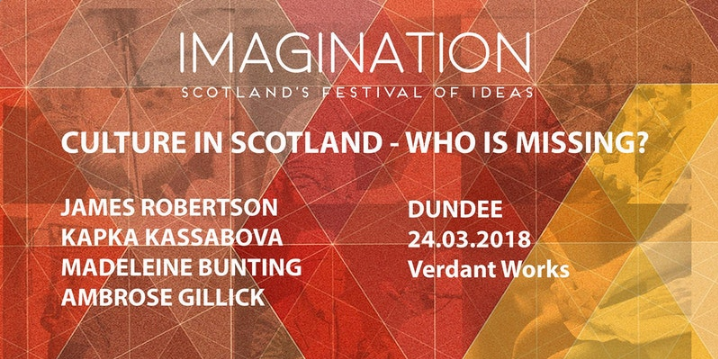 AN EVENT exploring ‘who and what is missing’ from culture in Scotland will be chaired by writer and commentator Gerry Hassan in Dundee this Saturday 24 March.

Launching Scotland’s Festival of Ideas, this year focusing on the topic of ‘culture in challenging times’, the event at Verdant Works will examine the nature of cultural exclusion in Scotland and how it can be addressed.

The three-hour conversation will hear from poet and novelist James Robertson, poet and writer of journeys Kapka Kassabova, novelist Madeleine Bunting, and Ambrose Gillick, who lectures at Glasgow School of Art and runs Baxendale, an architecture and art practice in Govan.

Gerry Hassan, who is producing the series of events along with co-producer of Architecture Fringe Andy Summers and arts producer Dawn Taylor, told CommonSpace the event aims to consider “who is missing from culture in Scotland” on multiple levels: “making it, imagining it, accessing it and consuming it.”

The event description itself argues: “We need to be asking ourselves difficult questions, listen to each other with respect and learn to notice who is inside the official conversations and who isn’t. Then we need to change what we do.”

Hassan suggested that Scotland faces particular challenges in this regard: “Scotland suffers from a profound cultural deficit – whereby a huge swathe of the country have little or no understanding and engagement with culture in Scotland.

“That may be true in any developed country in the world but here it is exasperated by issues such as the timidity of broadcast media, retreat of the print media, factors such as the Scottish cringe and the inability of commissioners of culture in public bodies to take risks and invest in the original and the new.”

Asking the question of who is missing, Hassan explained, opens up “big questions about class, gender, identity and generation” and, ultimately, “who has cultural power in Scotland?”

“Who has most influence in shaping the contours of the artistic and cultural imaginations?” Hassan said. “Is there an insider class and elite who have told themselves and the rest of the country a certain partial story of culture?”

These are just some of the questions which the speakers will be drawing on and inviting attendees to consider. “Culture should ask difficult questions,” Hassan added, arguing that doing so is necessary to allow different stories of Scotland to emerge.

“For younger people the cultural sector in Scotland can at best offer an insecure future as a member of the precariat.” Gerry Hassan

To enable this, Hassan said, “we have at least two big challenges”. He went on: “The first is entry points and access. For younger people in their twenties and thirties the cultural sector in Scotland can at best offer an insecure future as a member of the precariat.

“We have to at least acknowledge the cost of this in human terms and culturally in terms of risk-averseness.”

The second, Hassan said, was rooted in the need to question “a generational set of stories about culture” in Scotland.

Hassan explained: “The flourishing of culture in Scotland argument which states that from the 1980s we have had a renaissance is to put it mildly complacent and has become to an extent a self-serving story of people who grew up in that period.

“We really need to encourage multiple different Scotland’s to emerge – and in so doing allow different generational stories – as well as others to find voice, form and platforms.”

The Festival of Ideas event in Dundee on March 24 is the first in a series on culture in constraining times. Follow-up events will explore the themes of public spaces and culture, financial constraints, and the challenge of Brexit.

Tickets to the event can be purchased online here.