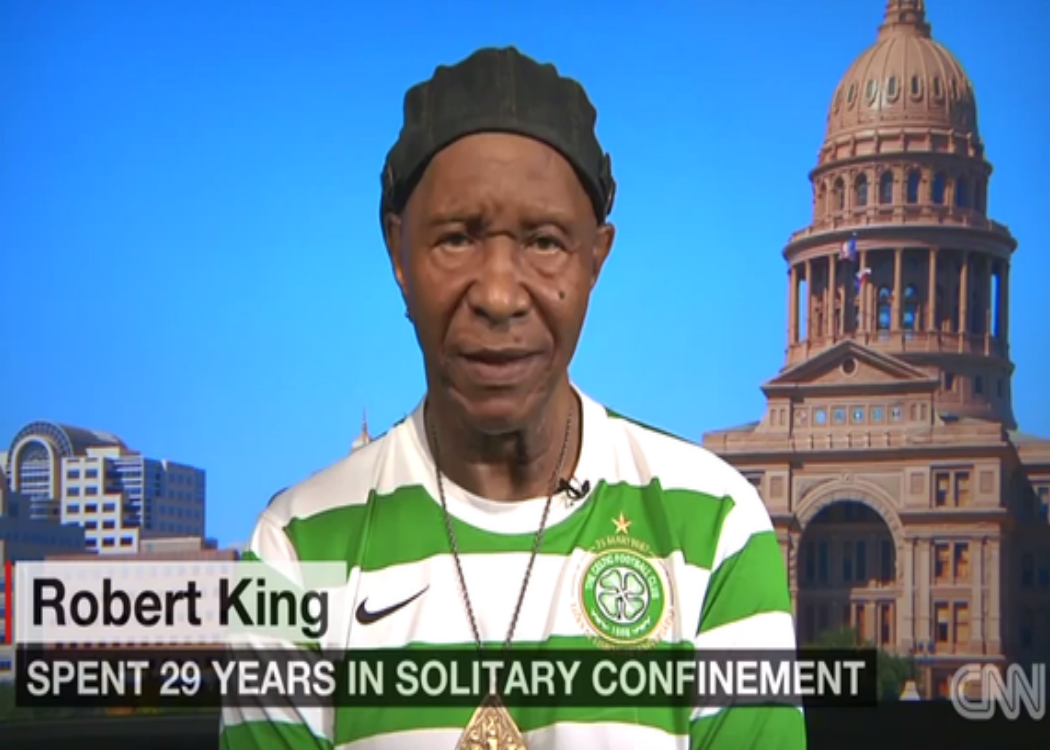 IT’S NOT every day a Black Panther appears on TV wearing a Celtic football strip. But last night on CNN current affairs show ‘Amanpour’, Robert King did just that as he discussed his decades long incarceration in jail for a crime that he insists he didn’t commit.

King is one of the Angola 3, a trio of young black men who have spent over 100 years between them in solitary confinement accused of killing a prison guard in 1972.

Amnesty estimate that as many as 80,000 prisoners are held in solitary confinement in the United States, and 25,000 are held in long-term isolation. They are held in cells, usually no larger than 8 by 10 feet and without windows, for at least 22 hours per day and experience minimal contact with other people.

Amnesty: “No physical evidence links them to the crime – potentially exculpatory DNA evidence has been lost and the testimony of the main eyewitness has been discredited”

Campaigners have long argued that the Angola 3’s convictions are unsafe and that they were targeted because of their political activism. Those opposing the convictions include Teenie Rogers, the widow of Brent Miller who the three men are accused of killing.

Amnesty says that “no physical evidence links them to the crime – potentially exculpatory DNA evidence has been lost and the testimony of the main eyewitness has been discredited”, while judges say that the original convictions were secured through racial discrimination.

This week a judge ordered the immediate release of the last man incarcerated, Albert Woodfox, and barred the state from trying him for a third time. Supporters estimate that he has spent 40 years in isolation with some breaks in the 1990s and in 2008.

The story begins in 1971 when King, Woodfox and Herman Wallace were sent to Louisiana State Penitentiary, known simply as ‘Angola’ after the town where it was located.

They soon became members of the prison chapter of the Black Panthers, an organization that practised militant self-defense of minority communities, and fought for revolutionary socialism through mass organizing and community based programs.

In prison, the trio helped organize petitions and hunger strikes to protest segregation within the prison, and organised against widespread rape and violence.

However, in 1972, the men were moved to solitary confinement after being accused of the murder of prison guard Miller.

“He’s had 42 years of maintaining his innocence in solitary confinement, and if his last few breaths are as a free man, we’ve won”

Following appeals and renewed attention on the case, in February 2001, Robert King walked out of the gates of Angola prison, Louisiana, a free man. He had spent thirty-one years of his life in prison and twenty-nine continuous years in solitary confinement.

Twelve years later, in October 2013, Wallace was released when a judge granted him a new trial but died just days later, after the state at first fought his release. He was suffering from advanced liver cancer.

“He’s had 42 years of maintaining his innocence in solitary confinement, and if his last few breaths are as a free man, we’ve won,” said a supporter at the time.

Now campaigners are hopeful that Woodfox may soon be the last of the Angola 3 to be released.

Today (Friday) a U.S court will decide whether to release Woodfox, as ordered by Judge James Brady, or extend a stay on his ruling while the state seeks to appeal the ruling.

King will make the trip back to Angola from his home in Austin, Texas, as he hopes to greet his friend and comrade when he walks out of jail after 44 long years.