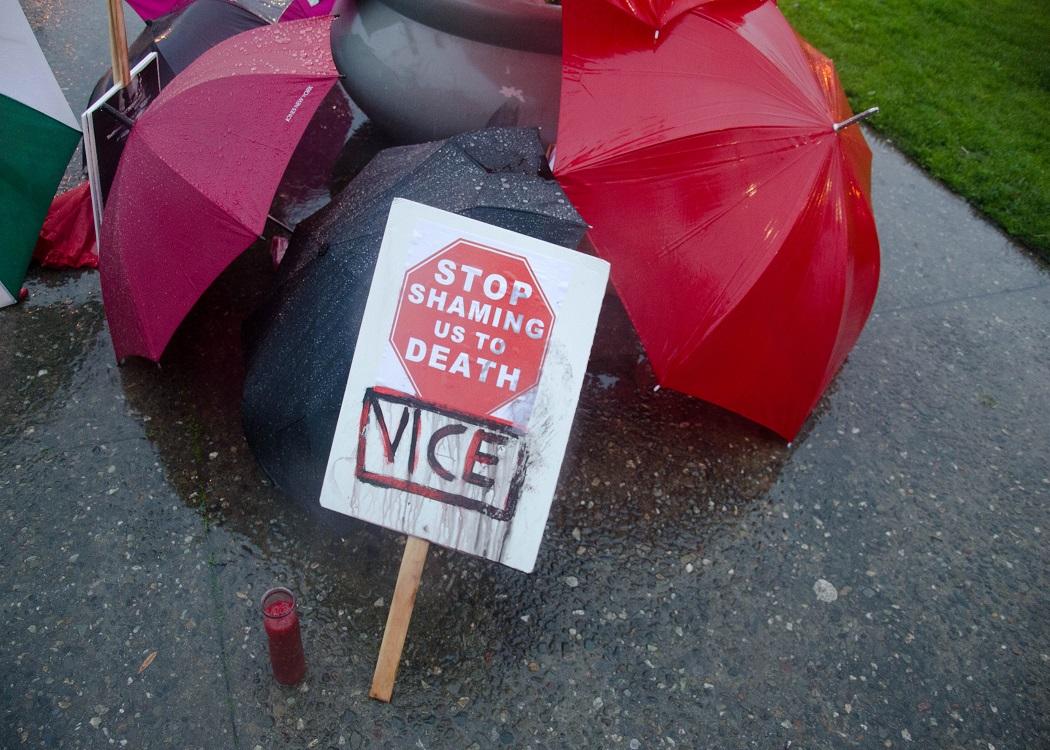 IN MARCH, Community Safety Glasgow (CSG) , a function of community policing, co-owned by Glasgow City Council and the Scottish Police Authority (SPA), relaunched 'Routes Out' , a service for women who are working in the sex industry. The launch focused the organisation’s new brand on harm reduction.

An operational delivery review within the Routes Out drop-in had been undertaken over the last year because of a reduction in women attending the drop-in or being engaged via outreach. The lack of contact with women in the sex industry from the CSG drop-in service, formerly known as 'Base 75', was reported in July 2015 , highlighting internal staff disputes to extend hours of outreach work to 3am.

The staff also expressed concerns about Glasgow City Council’s approach in dealing with the sex industry. While staff stated their support for the Routes Out policy on sex work, grievances arose from the instruction that every contact had to be logged and reported.

This resulted in women feeling uncomfortable and suspicious of the service. As a frontline for women who may be in need of help and advice, this was a damaging outcome.

The trust women gain through support worker contact is part of the person-centred framework, and increases the likelihood that women will continue to access to service, no matter what circumstances they may face. This stability of contact means the service can be more effective in promoting women’s safety.

Safety is always the first priority. No violence against women workbook manual or principles would ever dispute that.

Safety is always the first priority. No violence against women workbook manual or principles would ever dispute that.

Following resignations and termination of staff contracts from Base 75, the relaunched Routes Out has new opening hours, and the drop-in is open later and on different days, as well as providing a service on a Saturday (operating hours will be: Thursday – 7pm-11.30pm; Wednesday, Friday and Saturday 9pm-1am). The new model is designed to increase engagement levels and capacity for both drop-in and outreach provision.

Although the new CSG 'brand' is ostensibly one of harm reduction, CSG still abides by the city’s zero tolerance policy on prostitution. Zero tolerance describes prostitution as commercial sexual exploitation, inherent violence towards women, a complete form of harm that can never be safe, and will not be tolerated in any circumstance as a lifeline or option.

Previous campaigns by CSG, in particular the 2014 '16 days of action' to end gender-based violence, focused entirely on sending out crude, unhelpful messages: "Now selling herself is all she knows." This messaging underplays the resilience and agency of women in the sex trades, and posits further criminalisation as the 'solution', erasing the extent to which the harms of prostitution are tied to criminalisation.

Although the new Community Safety Glasgow (CSG) 'brand' is ostensibly one of harm reduction, CSG still abides by the city’s zero tolerance policy on prostitution.

Worryingly, this particular message is still being publicised, as CSG continues to hold an advocacy link to the Scottish abolitionist campaign 'End Prostitution Now' . The campaign is supported by a number of agencies, with a particularly strong advocacy push from the Women’s Support Project , which received a 2015/2016 £60,000 budget from the Scottish Government to tackle the demand of buying sexual services.

The campaign intends to tackle the demand, but to do so by questioning the idea that 'prostituted women' make a decision to work in the sex industry based on their individual life circumstances. It is troublesome to understand how this de-legitimising of women’s expertise regarding their own lives can align with CSG’s new harm reduction approach. Harm reduction, after all, is based on respect and non-judgement.

The service issues a reassuring statement to women that "Routes Out does not have to be about stopping selling sex. We will support women to exit, but realise that for some women this may not be their current goals," but it continues to push the harmful End Prostitution Now propaganda, amid the campaign for Scotland to criminalise clients.

Previous campaigns by CSG, in particular the 2014 '16 days of action' to end gender-based violence, focused entirely on sending out crude, unhelpful messages: "Now selling herself is all she knows."

Perhaps there is limited belief held by CSG in an evidence-based harm reduction stance. This raises serious questions regarding the service's relationship to Glasgow’s zero tolerance policy, and abolitionist links within Scotland and beyond.

"Routes Out does not have to be about stopping selling sex": Can this statement be a true representation from CSG while it is tied to Glasgow City Council’s wider zero tolerance stance on the sex trade?

A closer look at the Routes Out website provides further confirmation that CSG wishes to end prostitution, and has placed its own ideological views of the industry on its webpage, a site intended to be a holistic source of advice and guidance for women seeking support.

We must consider how any woman who is in need of finding support online would feel seeing this material. Was this even taken into consideration on how this could be viewed by the women they hope to reach?

There is no information to direct women to Scotland’s laws on prostitution, to which they are increasingly vulnerable, and the site misses the opportunity to incorporate the National Ugly Mugs safety scheme (NUM) , a national project that improves the safety of sex workers in practical ways.

In 2015, NUM sent out over 100,000 life-saving alerts to sex workers nationwide to inform and protect. Routes Out states, rather confusingly, in its safety advice: "Prostitution is never safe … However, if you are selling sex in any way … try to keep yourself out of danger as much as possible."

This messaging underplays the resilience and agency of women in the sex trades, and posits further criminalisation as the 'solution', erasing the extent to which the harms of prostitution are tied to criminalisation.

A downloadable attachment lists various ways to reduce your risks while working, e.g. carry a personal alarm, carry a mobile phone, be aware of escape routes etc., but states at the very beginning, again, that prostitution can never be safe. This speaks, very clearly, on the reluctance to ever associate safety in prostitution.

As sex worker rights charity Scotpep states : "To define sex work as intrinsically violence renders invisible the fact that some sex work contexts are markedly more dangerous than others … and therefore obscures the need to observe which sex work contexts are safer (and why), and learn policy lessons from those observations."

The 'harm reduction' branding seems likely to be lip service, given the widely publicised views from CSG on selling sex. Ironically, the website that claims: "We understand the risk of selling sex and the stigma women can feel which can make it difficult to ask for support."

Can it not be considered that some of the abolitionist material may act as a deterrent for women to make contact and get the help they may need? Conflating zero tolerance, with its accompanying criminalisation, with harm reduction, is a problematic approach towards prostitution. It is impossible to see how the two could ever sit comfortably together.

We must consider how any woman who is in need of finding support online would feel seeing this material. Was this even taken into consideration on how this could be viewed by the women they hope to reach?

The relaunch of Routes Out feels like a half-hearted attempt to believe in the value of harm reduction in the sex industry, and the capacity of harm reduction approaches to deliver meaningful safety improvements. However, the effect is to leave more lingering thoughts and questions, which need to be clarified, such as:

– What did CSG mean when it issued out a public statement that it had improved the Routes Out service?

– In what ways does CSG see the harm reduction approach intersecting with Glasgow's zero tolerance policy on prostitution?

– Will CSG continue to have a campaign link to end prostitution, knowing, as it stated, that leaving the sex industry may not be what women wish to do based on their own circumstances?

– Does CSG believe that it is tolerating violence against women through a harm reduction approach (Equally Safe 2016 has continued to identify prostitution as violence)?

The answer to the last question will definitely be no. They are not tolerating violence in harm reduction – perhaps CSG should admit that.