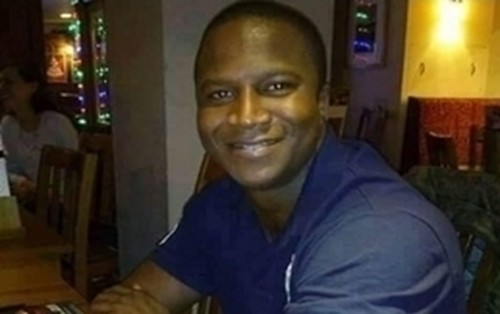 The family of Sheku Bayoh, who died after being restrained by police, have called for a public inquiry following the chief prosecutor’s decision not to bring charges

THE FAMILY of Sheku Bayoh, whose died in 2015 after being restrained by police, will accept “nothing less” than a public inquiry, following confirmation from the Lord Advocate that no one will be prosecuted for the 31-year-old’s death.

Following a call regarding a man behaving unusually, Bayoh – a trainee gas engineer and father of two – was stopped by police in Kirkcaldy, Fife on 3 May 2015, and was subsequently held face down on the ground within 46 seconds of the first two police officers’ arrival.

During his restraint, officers used batons, CS gas, pepper spray, handcuffs and leg and ankle restraints. A post-mortem later found that he had suffered 23 injuries, including head wounds, a fractured rib, facial injuries, bruises to his body and petechial haemorrhages. Approximately an hour and a half after his restraint, Bayoh was pronounced dead.

While the official cause of death was recorded as intoxication by the drugs MDMA and ‘flakka,’ Bayoh’s family have maintained that asphyxia was a contributory factor in his death, and that he suffered cardio-respiratory arrest while the restraint was employed by the officers involved.

Bayoh’s family have also argued that CCTV and phone footage have raised doubts over the accounts made by the officers involved regarding the events leading up to his death.

“The family feel totally betrayed by the Lord Advocate for not holding power to account, for his broken promises, his betrayal of justice and his failure to act in the public interest.” Bayoh family lawyer Aamer Anwar

Sixteen months following Bayoh’s death, the Police Investigations Review Commissioner (PIRC), who investigate deaths in police custody and contact in Scotland, submitted their investigation to the Lord Advocate. Bayoh’s family then waited two years for the original decision and have waited a further year for the review to be completed.

In October 2018, the Lord Advocate James Wolfe QC Wolffe QC told Bayoh’s sisters and Bayoh family lawyer Aamer Anwar that Scotland’s chief prosecutor would not be pressing charges against any of the officers involved. Responding at the time, Anwar claimed that there had been “repeated attempts by police sources to print lies, criminalise, speculate and smear Sheku in his final moments.”

Two months after the meeting with the Lord Advocate, evidence obtained by BBC Scotland ignited fresh controversy over Bayoh’s death. A Disclosure investigation revealed evidence that the first officers on the scene appeared to escalate the situation instead of defusing it, that Bayoh’s actions prior to his death were exaggerated in official police documents, CCTV footage that threw doubt on officers’ claims that one of them was kicked and stamped on by Bayoh, and claims that racism may have played some part in these events.

After meeting with Crown Office officials today [11 November], in a statement on behalf of the Bayoh family, Anwar told press: “The Lord Advocate has advised the Bayoh family that not one police officer of Police Scotland will face charges for the death of Sheku Bayoh.

“The family feel totally betrayed by the Lord Advocate for not holding power to account, for his broken promises, his betrayal of justice and his failure to act in the public interest. Neither the family or the legal team accept the Crown’s reasoning for no criminal charges.

“The Lord Advocate has presided over a four and a half year investigation which was deeply flawed from the moment that Sheku Bayoh lost his life. And let me say this: the family will accept nothing less than a public inquiry from the Scottish Government to get to the bottom of what went wrong.”

While a review of the decision not to prosecute the officers involved has been carried out, a fatal accident inquiry (FAI) or a public inquiry will now be held.

Anwar added: “The family do not have the trust or belief that a fatal accident inquiry under the control of the Lord Advocate would have the remit or the courage to deal with serious public concerns, the wider issues of deaths in custody, use of restraint techniques, allegations of racism, lack of police accountability and the insufficient powers of the PIRC, nor will the findings of an FAI be binding on Police Scotland.”

Bayoh’s sister Kadi Johnson also said: “We the family lost confidence a long time ago in the ability of PIRC to carry out a robust and impartial investigation, but we have tried desperately to maintain confidence in the present Lord Advocate and his team. Today’s decision feels like police protection.

“If my brother Sheku Bayoh was restrained and died by civilians and not police officers, they would have automatically been treated as suspects. Why should police officers be above the law in a civilised society like Scotland?” Sheku Bayoh sister Kadi Johnson

“Before my brother was met by the very first two officers who handcuffed him he had no injuries. Soon after his body was covered from head to toe in injuries, including gashes and scratches all over his face, a broken rib and haemorrhages in his eyes – which is a sign of asphyxiation.

“Despite the overwhelming evidence from before and since the original prosecution decision, the Lord Advocate and his team stand by their initial decision. It seems no lesson had been learnt from the Macpherson report and the introduction of the Race Relation Amended act 2000.

“I say this again: if my brother Sheku Bayoh was restrained and died by civilians and not police officers, they would have automatically been treated as suspects. Why should police officers be above the law in a civilised society like Scotland?”

Anwar confirmed that he and the Bayoh family will meet with First Minister Nicola Sturgeon and justice minister Humza Yousaf at the Scottish Parliament on 12 November.

Following the Lord Advocate’s meeting with the Bayoh family, a Crown Office spokesperson commented: “Following careful consideration and thorough review of all the available evidence, including submissions made on behalf of the family of the deceased, independent Crown Counsel has concluded there should not be a prosecution in this case.

“Although the evidence currently available would not justify criminal proceedings, the Crown reserves the right to prosecute should evidence in support of that become available.”

Scottish Police Federation deputy general secretary David Kennedy also commented: “We continue to support the officers involved in this incident and hope that any public or fatal accident inquiry follows as soon as possible for all the parties involved.”

Deborah Coles, director of the charity Inquest – which provides expertise on state-related deaths and their investigation to the bereaved – condemned the Lord Advocate’s decision as being based on “a fundamentally flawed investigation”, and backed calls for a public inquiry.

Coles said: “The disproportionate use of force against black people by police, in the UK and internationally, is well documented. A robust response to deaths like Sheku’s is an essential part of meeting human rights requirements and is of significant public interest.

“Sheku’s family have faced lies, denial and obfuscation since his death. Like too many bereaved families in Scotland, their struggle for truth, justice and accountability has been unnecessarily long and hard. This frustrates the key function of these processes to prevent future deaths.

“Like too many bereaved families in Scotland, their struggle for truth, justice and accountability has been unnecessarily long and hard. This frustrates the key function of these processes to prevent future deaths.” Inquest director Deborah Coles

“This decision not to prosecute the police at an individual or corporate level is deeply disappointing and is based on a fundamentally flawed investigation. A public inquiry is now needed to ensure the circumstances of this death and broader issues around institutional racism, police restraint practices, and the Scottish systems for responding to deaths, are examined thoroughly.”

Smith said: “Today’s announcement that the nine police officers involved in the death of Sheku Bayoh will not face criminal charges is a blow to his family who’ve campaigned for justice for over four years. It is no wonder they feel betrayed.

“Last year Sheku’s family led our St Andrews Day March and Rally Against Racism and Fascism. We will march again this 30th November and I have no doubt that the ongoing fight for justice for Sheku will be on everyone’s minds.

“The Scottish Trades Union Congress offers our upmost solidarity to the family of Sheku Bayoh, and echo their demand for a full public inquiry into his death.

“Only with justice, will peace come for those grieving Sheku.”

According to a Freedom of Information request from the National newspaper, there have been eight deaths in the custody of Police Scotland in the past five years. All are currently awaiting FAIs, and no investigation reports have yet been published.

Picture courtesy of the 4Ward 4Ever Campaign UK