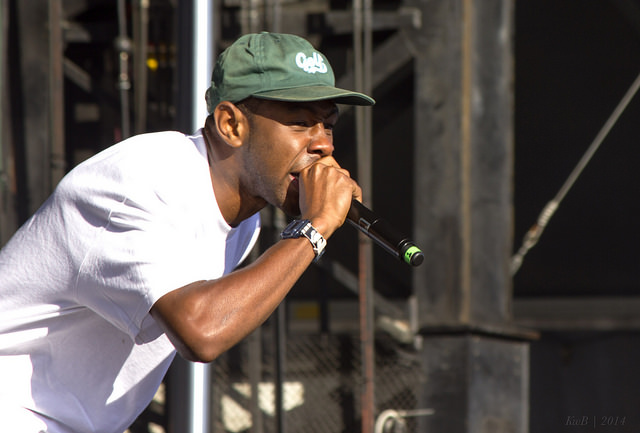 ALTHOUGH they may emanate from the same brain and mouth that once brought us provocative and obscenity-laden bodies of work such as Bastard, Goblin and WOLF, it is clear from this opening salvo from Tyler, The Creator’s Flower Boy that we are looking at an artist with a drastically reconfigured focus.

In spite of it being several months away from the laborious time in which music publications and blogs begin to painstakingly put together their lists of the year’s best albums, it is safe to say that the LA-based rapper/producer/entrepreneur’s heartfelt exploration of loneliness, self-doubt and longing will be a prominent fixture on these countdowns.

Known for commanding one of the most fervent and unquenchable fan-bases in modern music ever since he smashed hip-hop’s glass ceiling with the subversive collective that was Odd Future Wolf Gang Kill Them All (OFWGKTA) in 2011, footage of Tyler’s festival shows at events ranging from Panorama to Agenda Festival have sparked a renewed rabidity for the artist that there hasn’t been since he first exploded onto the scene.

In the face of all of this image rejuvenation that we’ve seen take place over the past few months, the man less commonly known as Tyler Gregory Okonma remains banned from entering the UK under any circumstances.

After returning with an album that definitively bids adieu to the shock tactics and amoral abrasiveness that was placed at the forefront of his early work in favour of smooth, confessional material that flits between the fantastical and the soul-baring, it appears that many of the bridges that Tyler once wilfully burned seem to be on the road to being reconstructed.

Ranging from publications and commentators that had once wilfully discredited the often puerile nature of his lyrical content, to members of the LGBTQ community that refused to condone certain comments that featured homophobic slurs as part of any fictional narrative in his music, the response to Flower Boy has been nothing short of seismic, and the allusions that Tyler has made towards being part of that very same community that once vilified him have been met with widespread approval.

Yet in the face of all of this image rejuvenation that we’ve seen take place over the past few months, the man less commonly known as Tyler Gregory Okonma remains banned from entering the UK under any circumstances.

Instated by Theresa May in August 2015 during her time as home secretary, the artist that had run roughshod over the hip-hop landscape since the almost prodigious age of 18 and inspired countless fans to pursue their own dreams was deemed to be not worthy of entry to the UK as it was “not conducive to the public good”.

In the years that preceded this drastic course of action, Tyler and the OFWGKTA collective had visited the UK on a plethora of occasions for events ranging from rapturously received live shows to opening pop-up shops for their sought after ‘Golf Wang’ apparel line without any form of major incident.

Instated by Theresa May in August 2015 during her time as home secretary, the artist was deemed to be not worthy of entry to the UK as it was “not conducive to the public good”.

A move that forced Tyler to cancel a string of scheduled UK dates that have remained unfulfilled to this day, what is all the more beguiling about this exclusion from the country is that the evidence used to brand him a menace to the moral fortitude of British society is material he penned in his formative years.

Referring to lyrics made on early projects, such as Bastard and Goblin, the character-driven, “horror-core” tendencies of his early work were labelled as encouraging “violence and intolerance of homosexuality” and fostered “hatred with views that seek to provoke others to terrorist acts”.

Given May’s chequered and divisive history with the LGBTQ community in her personal life and parliamentary voting decisions, the concept of Tyler’s art being in direct opposition to the “shared values” of the UK seems to be redundant when alumni of OFWGKTA, including the revered Frank Ocean and The Internet’s front woman Syd The Kyd, are not only among his best friends but most trusted collaborators.

When put it into the context of modern times in which Tyler has openly discussed his own sexuality in his music and subsequent promotional interviews, the notion that a notorious creative firebrand’s ability to enter a country based upon youthful short-sightedness is nothing short of ludicrous.

The profound injustice of this situation was perhaps best summarised by his long-time manager Christian Clancy, who took to Tumblr to fully address the situation, stating: “Is he perfect? Absolutely not. He’s a human evolving like the rest of us, and evolution is a process, not a light switch.

This is not a man who is aiming to incite “terrorism” in his young, impressionable fans. Tyler, The Creator is simply a fiercely creative individual.

“I’m not defending his OLD lyrics. To be honest they make me cringe, but I stand beside him because of who he actually IS.”

For those of us who aren’t thrust into the spotlight at a tender age, our indiscretions and adolescent overzealousness are played out behind away from the world’s glare, in ill-advised discourse with friends and in regrettable social media posts that we meticulously remove from the internet whenever they are brought to our attention.

In Tyler’s case, every single frustration, diatribe or moment of rebellious indignation was broadcast to a worldwide audience of receptive and completely enthralled fans and it has since made him a scapegoat for societal ills that he has never embodied.

As opposed to releasing music that was still filled with the dark, melancholic and macabre manifestations of his mind’s darkest inner recesses, the lyrics that had typified his earlier work had been all but dispensed with on 2015’s Cherry Bomb.

The record that he was scheduled to promote prior to his archaic banishment from the country, Cherry Bomb features a multitude to songs that actively seek to inspire listeners, such as the rallying cry of Find Your Wings and the almost jarringly positive Run, while it also attests to his place in mainstream culture due to collaborations with artists such as Kanye West, Lil Wayne and Pharrell and the renowned composer/funk and soul pioneer Roy Ayers.

It’s a move which assaults artistic expression and the crucial tenets of our free speech.

This is not a man who is aiming to incite “terrorism” in his young, impressionable fans. Tyler, The Creator is simply a fiercely creative individual who will explore everything from the most debased parts of the human condition to heartachingly stunning melodies and idealistic depictions of what it is to love in order to elicit the desired response.

In the event that he can aspire others to similarly dispense with any limitations on what can and cannot be achieved or what boundaries can be surpassed, then it appears that is even better.

Although Tyler may have become the prime example of this tyrannical attack on creativity from the UK’s Home Office, it is endemic of a bigger issue that must be remedied if Britain is to continue to hold its reputation as one of the world’s creative hubs.

If we are to persecute one man for lyrical content that is clearly at odds with his conduct in the realm of reality, shall there soon be a similar witch-hunt for those writing transgressive works of fiction or video game developers who simulate the harsh world of criminality through pixels and programming?

While we let celebrities and ‘esteemed’ individuals that have committed far worse atrocities than many of the fictional misdemeanours in his earlier work live unobstructed, the UK and Australia – a nation which harbours a notoriously puritanical stance towards explicit content – continue to prohibit an artist that will likely be regarded as a cultural landmark by future generations from entering the country to perform or promote his material.

Tyler, The Creator’s barring from the country remains a testament to the Conservative government’s apathetic, bordering on disdainful, approach towards the UK’s continually marginalised youth.

It’s a move which assaults artistic expression and the crucial tenets of our free speech. Tyler, The Creator’s barring from the country remains a testament to the Conservative government’s apathetic, bordering on disdainful, approach towards the UK’s continually marginalised youth.

Given the deep adoration that the world is currently holding for him in the wake of Flower Boy’s release, now is the time to uplift this preposterous sanction and allow those who find escapism or inspiration from Tyler’s work to experience it up close and personal while simultaneously telling the world that Britain is not a society that seeks to stigmatise or shackle artists.