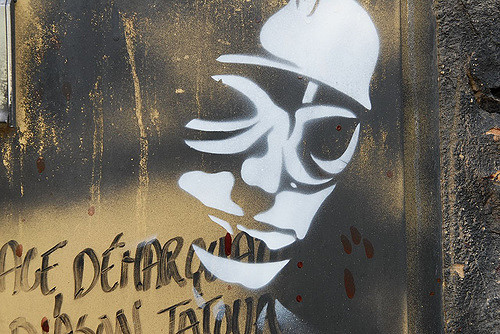 CommonSpace journalist Sean Bell explores the role of students in Paris May ‘68, speaking to eyewitness reporter Neal Ascherson about his experience of that time, and comparing that revolt to the student occupations in Scotland this year

MAY, 1968 – the crowded and clashing ideologies it encapsulated, the dreams it inspired, and the unprecedented events which escalated until Paris and beyond seemed on the brink of some audacious new form of revolution – did not appear spontaneously.

Student activism – the (loosely) organised force without which the quixotic, mercurial and still-controversial insurrection could not have taken place – was not an unheralded phenomenon in 1968. Yet the explosion of revolutionary anger and potential that shook France and later the world marked a significant divergence and progression from much of student activism that had preceded it. Radical ideas have always found purchase among the young, but never before had they not only dreamed and participated, but influenced and led to such an extent.

The fact that, even in contemporary France, living figures of influence may still be described as ‘soixante-huitards’ demonstrates how youthful the majority of participants in 1968 were, and – unlike many student movements – how unshakeable their legacy became.

Were the events in Paris an inspiration for the worldwide revolutionary fervour, or merely its most advanced symptom? In the United States, the civil rights movement and protests against the Vietnam War had already provoked sympathetic outrage globally, while the issues and injustices which would see Paris-inspired student activism take place in Mexico, Japan, Germany, Czechoslovakia, Canada and elsewhere had similarly been bubbling for years or decades. Nevertheless, the French revolt made possible by the nation’s students was an incendiary example.

So where did it begin? Despite the ostentatious strides towards modernity boasted by much of the West in the post-war years, France appeared to have stalled in 1968. Charles de Gaulle, the nation’s aged, self-mythologising president, enjoyed a level of personal power almost unheard of in Western democratic nations, and the control he exerted over French government and society left many of those younger than the 78-year-old leader disenfranchised and dissatisfied.

As the historian Mark Kurlansky wrote in 1968: The Year that Rocked the World, the Algerian War of Independence helped radicalize French youth: “By 1960, during the height of the Algerian protest movement, leftist students took over the student organisations that had been dominated for many years by right-wing students.”

During a 1961 protest demonstration in Paris, police opened fire upon Algerian protestors. Though it was never determined how many were killed, bodies of the victims were later found in the Seine.

Early in the year, the de Gaulle administration was already feeling threatened. The French Socialists and Communists, under the ‘February Declaration’, formed an electoral pact in the hopes of unseating de Gaulle’s fiercely right-wing government. Despite de Gaulle’s preferred narrative that he had almost single-handedly rescued France from Nazism, the dominant role played by Communists in the French Resistance ensured the Left a perpetual prominence within French politics.

In 1968, the old guard of the French Left and a new generation of student radicals held each other in mutual suspicion, but for a brief period, engaged in an almost unprecedented level of cooperation, encapsulated by the critical support of France’s most famous communist and philosopher, Jean-Paul Sartre, who spoke to Nanterre students and told Radio Luxembourg that violence was the only option for students seeking radical change.

This new breed of student radical emerged from a significant and growing demographic; in 1958 there were 175,000 students in France, yet merely ten years later, there were 530,000. As a result, French universities were enormously overcrowded, and these old-fashioned institutions had not advanced to match the progressive attitudes of many who studied there.

It was the Paris University of Nanterre that saw the first spasm of what would soon engulf the city and the country at large; on 22 March, an assembly of students, political activists, poets and musicians occupied a Nanterre administration building in protest against both the university administration and the class structure of French society. In response, the university authorities called in the police, and the Mouvement de 22 Mars (Movement of 22 March) was born, soon to be joined by other organisations, large and small, fiercely political or otherwise.

Conflict continued between Nanterre students and authorities until the university administration finally shut down the campus on 2 May, threatening the expulsion of several protest organisers. The next day, students at the Sorbonne expressed their solidarity, and by the following week, the national student union, the Union Nationale des Étudiants de France (UNEF) rallied both students and teachers in a march of over 20,000 on the Sorbonne, despite the French Government having banned all demonstrations.

The violence that would ensue cemented May 1968 not just as a movement of protest, but of revolution. Following clashes between the march and the police, the government reported 600 wounded demonstrators and 345 wounded police.

The casualties only hardened both sides; barricades were erected and, lacking conventional arms, cobblestones were torn up by students as makeshift defensive weaponry against a police force that was barely controlled by either its prefects or its government.

“I thought the movement was wild, heroic, brilliantly imaginative – but chaotic and without clear direction.” Neal Ascherson

The Scottish writer and journalist Neal Ascherson, who was sent to Paris to report on the escalating crisis, arrived a day or so after the first barricade battles were over. However, he recalls, “the city was still in the hands of the revolutionaries”.

“At the time, I was based in Berlin, as The Observer’s correspondent,” Ascherson explained. “I persuaded the paper to send me to Paris on two grounds: 1) The story itself , although they already had a permanent man there, who I felt would be deeply unsympathetic to what was happening; 2) I was personally strongly committed to the student movement in West Berlin over the previous 18 months, and went to Paris with a number of SDS [Socialist German Student League] leaders. They were convinced that the French theoretical base for street action and revolution was too weak and needed their advice and support.

“The context was a continent on fire: violent upheavals and repression in Poland, the Prague spring coming to a boil, Greece under CIA-backed dictatorship, strikes, riots in Italy etc. Added to it [was] the vast anti-Vietnam War movement among the American young, leading to widespread repression and violence. So the outbreak of the Paris events instantly attracted worldwide attention.

“I thought the movement was wild, heroic, brilliantly imaginative – but chaotic and without clear direction. Acting with SDS, I addressed student meetings at the Censier campus of the Sorbonne, urging the French students to take a more firm and clear theoretical attitude to the revolution. As a result, I was declared a prohibited immigrant to France.”

Following the riots, on 7 May, an even larger procession stood before the Arc de Triomphe to demand all charges against arrested students be dropped, that police should vacate university campuses, and that both Nanterre and the Sorbonne be reopened.

On 13 May, over a million people marched through Paris, and for a day, almost owned the French capital; the police, unable to combat a demonstration of such size, were intimidated into hiding. In a humiliating reversal of the erstwhile dismissiveness of the de Gaulle government, Prime Minister Georges Pompidou personally announced the release of imprisoned students and the reopening of the Sorbonne, which was immediately occupied and declared an autonomous “people’s university”. But the spontaneous new movement was not yet satisfied.

The involvement of France’s increasingly young workforce in the protests extended the insurrection beyond the universities and streets and into the factories, roughly 50 of which were occupied by mid-May. Within weeks, over 10 million French workers – two thirds of the national workforce – were on strike, often superseding their more conservative trade union leaders.

By the end of the month, de Gaulle – who had previously sneered that the demonstrations were the actions of overindulged youths afraid to face exams, before descending into paranoia and perceiving the unrest as the result of foreign provocation – fled his official residence in the Élysée Palace, and on spurious diplomatic grounds, left for Romania.

“If that process had gone ahead, a full-scale, old-fashioned revolution would probably have followed.” Neal Ascherson

Without the figurehead who had designed the constitution which made him so indispensable, the French government effectively ceased to function. Despite pressure from his own party, de Gaulle refused to resign, but instead grudgingly announced an election for 23 June, counterbalancing this compromise by threatening a state of emergency if students and workers did not end the ongoing strikes. Meanwhile, the government leaked to the media that the French army was massing outside of Paris in anticipation of further revolutionary violence. Yet the snap-election – agreed to by the French Communist Party – effectively brought the possibility of revolution to an end.

Ascherson recalls: “Later in May, there was a moment at which workers in large enterprises, members of left-wing unions such as CGT, began to declare support for the ‘Paris students’. If that process had gone ahead, a full-scale, old-fashioned revolution would probably have followed. But the French Communist Party took fright, directed its militants not to support the political demands of the students, and eventually turned the workers’ movement into a mere wage round.”

However, although the events spurred by May, 1968 had come to an end in France, the spirit they had engendered did not. Asked to what extent the various insurrectionary actions around the world took note of each other’s example, Ascherson says: “They were all very much aware of each other. The practice of students occupying university buildings and forcibly carrying out reforms is still in the armoury of discontented students all over the world.

“The movement’s attack on general bureaucracy and authoritarianism had mixed results. In West Germany the movement imploded as some turned to armed struggle and terror. But it left a legacy of radically changed attitudes to authority and social discipline.”

“The barefaced radicalism of ’68 in calling for the immediate end to imperialism, capitalism and bureaucracy has been mostly lost.” Edinburgh University occupation member Emily Robinson

Reflecting on the legacy of the Paris revolt, Emily Robinson, Women’s Officer for the Scottish Labour Young Socialists and a member of the recent Edinburgh University occupations, recognises both points of inspiration and marked contrasts between the present student movement and 1968: “Scotland never really had its turn in 1968, for a variety of reasons, but that’s not to say the spirit of ’68 didn’t live on in its student movement, I think revealing itself most clearly during this last round of student occupations that came in solidarity with the UCU strikes.

“Unlike ’68 (at least in France), the occupations here kicked off in solidarity with the strikes, rather than in France where the wildcat strikes came after the start of the occupations. But the breadth of the issues targeted is similar in both: while the occupations here initially started with direct goals taken from UCU demands, they (particularly the Edinburgh University occupation) ended with a critique of the Academy as a whole. Just as the French rebelled against capitalism and American imperialism, the student occupations here revolted against the Americanisation of the British higher education system.

“This isn’t necessarily a bad thing: more achievable goals theoretically translates to longer term sustainability, but the barefaced radicalism of ’68 in calling for the immediate end to imperialism, capitalism and bureaucracy has been mostly lost.”