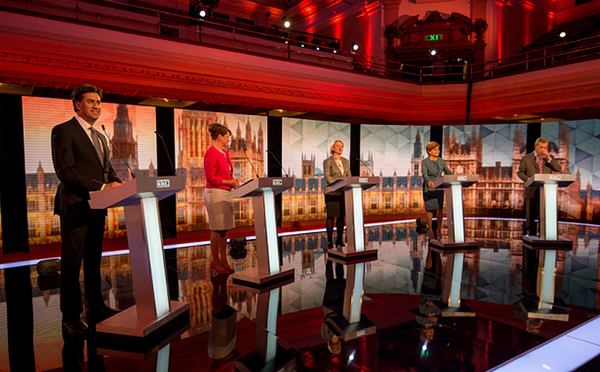 WILL they or won’t they?

The question is usually left to story-lines in television dramas, but last night it was the match-up between the SNP and Labour that dominated UK television viewing.

Ed Miliband, Labour leader, and Nicola Sturgeon, leader of the SNP, came out on top in the post-debate opinion poll. However, during the debate they were split over a party deal after the election.

Here are the five debate highlights:

1. Sturgeon called for pact to lock the Tories out

First Minister Nicola Sturgeon repeated her call for a SNP-Labour deal that keeps the Tories out of power after the election.

Sturgeon said: “I can help Labour be bolder…take the chance to kick David Cameron out of Downing Street. Don’t turn your back on it – people will never forgive you.”

Miliband remained confused on the issue, once again ruling out a ‘coalition’ deal that isn’t on offer.

However, a deal between the parties on a ‘confidence and supply’ basis or a vote by vote arrangement remains a possibility.

The three ‘progressive alliance’ leaders from the SNP, Green Party and Plaid Cymru challenged Ed Miliband to “be bolder” when it comes to reversing Tory austerity cuts to public services.

Leanne Wood, Plaid Cymru leader, called for an emergency budget after the election to change the economic direction of the country at the earliest opportunity.

Natalie Bennett of the Greens claimed that Labour “are just holding things at the same kind of level”, while Sturgeon added that there wasn’t a big enough difference between Labour and the Tories.

Miliband, faced with the challenge of winning Conservative held seats in England while maintaining left-wing support, was forced to outline a list of spending cut plans. He insisted that Labour’s plans would limit economic pain.

Trident nuclear weapons were chosen as an audience question for the political leaders.

While the SNP, Greens and Plaid supported disarming the weapons system, Miliband supported weapons of mass destruction by claiming “we can’t predict the threats we face 20, 30, 40, 50 years ahead”.

Sturgeon, who has made stopping the renewal of trident a ‘red-line’ issue for her party, said: “When it comes to a choice of how to spend PS100bn I choose childcare, health and education over new trident weapons any day of the week.”

However, the party clash was less clear cut than it may appear.

4. Nigel Farage blames the audience and the BBC

Ukip leader Nigel Farage cast a lonely figure off to the far right of the other left-leaning leaders.

When the audience warmed to his competitors arguments on housing and austerity, Farage claimed the audience was biased “even by the left-wing standards of the BBC”.

Host David Dimbleby tried to calm Farage down, explaining that the audience had in fact been selected by an independent polling company and not the national broadcaster.

5. Everyone won the debate, according to party supporters

After the debate all the party officials claimed the leader of their party won. Even Liberal Democrat and Tory officials talked up how great the debate was for their parties, when David Cameron and Nick Clegg didn’t even take part.

The UK wide poll of who won the debate suggested a good night for Labour and the SNP:

The small sample of voters in Scotland who were asked for a view identified Sturgeon as the winner by 68 per cent to Miliband’s 17 per cent.