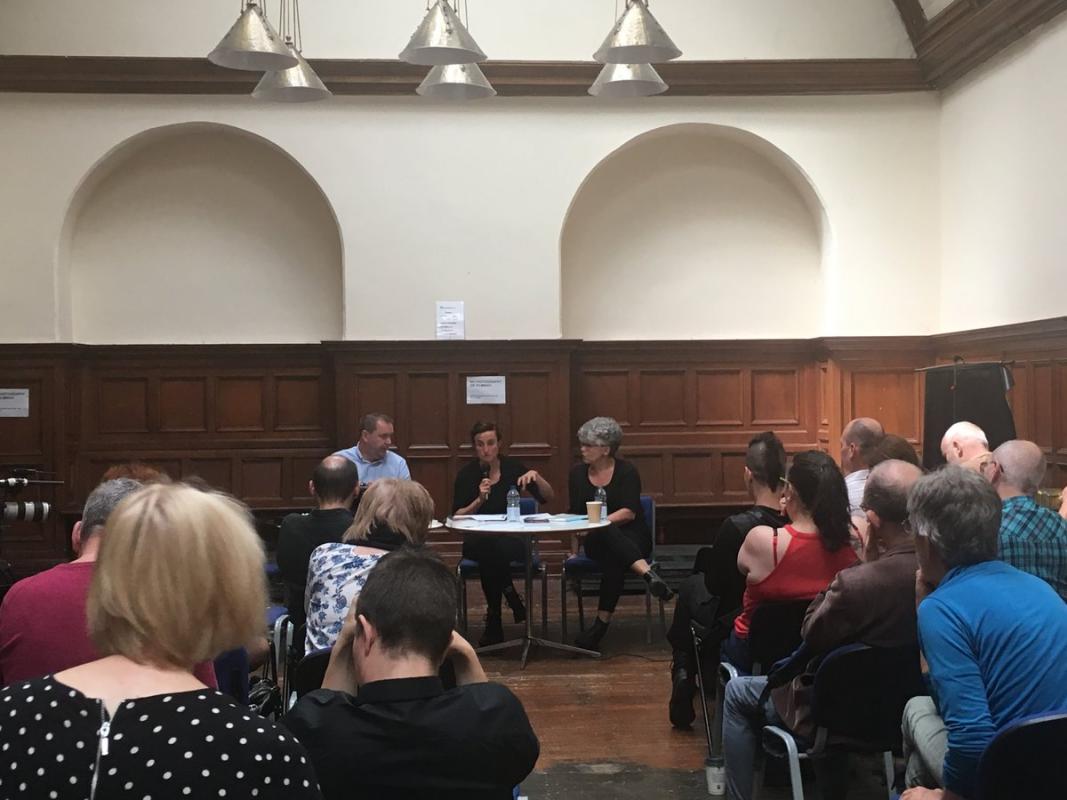 CommonSpace reports from today’s [23 June] SpyCops conference, where a victim pushing for Scotland inquiry says ‘sinister, state-sponsored method acting’ was one piece of a disturbing puzzle designed to crush dissent

“IF YOU can imagine a really good method actor, someone like Christian Bale, who can change the way he looks, or Robert DeNiro, and they become someone else and they live it, I think it’s a little bit like that. A really sinister, state sponsored version of method acting.”

Andrea (pseudonym) was what she describes as an “accidental activist” when she was introduced to Carlo Neri by a friend at an anti-war protest in London in 2002. She was not a “serious activist” but she was well-placed enough within different groups of campaigners that she held a position of trust.

This, she believes is why Neri (whose real name has not been revealed) targeted her to strike up a relationship in the course of his duties as an undercover police officer. Quickly, things between the pair became serious. As Andrea recalls, they were “in love”, they moved in together within months, and Neri proposed.

Well-liked within the activist and trade union community, nobody suspected that Carlo Neri and his elaborate back-story were entirely fictional. Andrea explains how Neri presented a believable story of why she was never able to meet his family, and played on her sympathies for the trauma he claimed to have experienced.

“He arrived with a story of difficulties in the family, and he had talked about a difficult relationship with his father. He said his mother was dead and his father was still alive but there had been domestic abuse in the family life,” she says.

READ MORE: ‘If someone seems too good to be true, they probably are’: Environmental activist speaks out on how undercover police shook her community

Only ten years later, after the relationship had ended, did the truth hit Andrea when she was presented with documentation which proved Neri was a police officer – not, as he had claimed, a locksmith – and that he was married with children. Neri is believed to have been a part of the Special Demonstration Squad, due to his focus on socialist and anti-fascist groups.

“Later, when things started to change and fragment, he dropped the bombshell that, when his father died, he just found out that his sister had been sexually abused,” Andrea recalls.

“It was so believable, but that story, it was like there was a preparation for it – it had been building up. And this was the bombshell: sexual abuse. I mean it’s huge, it’s a traumatic thing.”

This revelation served as the precursor for the end of the relationship, as Neri began to grow distant and emotionally volatile, claiming to have suicidal thoughts. Ultimately, he moved on to live with high profile trade union activists, something Andrea now believes to have been part of the plan.

And yet, at the time, the transition seemed entirely natural. “Bearing in mind I spent my life working in mental health, I believed all of it. He became tearful, he lost a lot of weight, he physically changed, his eyes changed, he looked different.”

This is why Andrea now considers Neri to be a skilled method actor, a talent she says was strategically honed by the police. Now actively involved in the Police Spies Out of Lives campaign, and the inquiry into undercover policing in England and Wales, Andrea has learned that her experience eerily mirrors that of other victims.

“When you look at all the stories, they all had the same tactics – they all showed signs of breaking down, they all started to change, some more dramatically physically than others,” she explains.

Andrea is determined that people understand how her experience and that of the other women impacted by these relationships formed part of a high-level system, and were not simply the work of a few “bad apples”.

“There was manual written that shows this was all kind of orchestrated, because they were told how to do it: how to infiltrate, how to develop relationships, how to convince people. And that’s the strategy, that’s not an individual choice,” she argues.

“They made individual moral choices which were completely wrong but there’s a whole strategy and the funding of the state and fake ID and fake passports to do it, and that’s kind of the real sinister backdrop.”

Despite her very personal experience with undercover policing, Andrea is firmly focussed on drawing attention to the power structures and agendas revealed by the focus and tactics of these operations.

“In England, the inquiry has listed certain groups – it’s very cagey about listing all of them – but what they’re not writing down is how many were infiltrating trade unions, and we know that they did. I know Carlo was in the GMB and he infiltrated very specific high profile trade unions activists.”

“So this whole thing about working people having the rights and the protections to do their jobs safely and be able to challenge things where they’re wrong, that’s being derailed,” she adds. “I think that’s where class comes into it, and at the top of that is power and that imbalance, and they were working to protect that imbalance.”

“These women knew nothing about what their husbands were doing, they thought they were probably saving people from terrorist incidents,” Andrea

Andrea also points to race as a key factor at the heart of the issue, with the infiltration of the families of people whose murders were not investigated properly, like Stephen Lawrence and Ricky Reel, and people who died in police custody, which Andrea argues underlines a trend of “institutional racism”.

Meanwhile, she says, her own experience highlights how gender has been at play in the operations, with women used and manipulated as a gateway into activist groups. On the other side of this, Andrea says, are the officers’ wives, who were almost a prerequisite for the job as it provided assurances that the officer would return from their undercover duties.

“These women knew nothing about what their husbands were doing, they thought they were probably saving people from terrorist incidents, not that they were living down the road with another woman for two years,” she says.

Indeed, earlier this month, a group of ex-wives of undercover officers wrote an open letter in The Guardian in support of Lush’s controversial campaign describing undercover police as “paid to lie”.

“I think that’s a hugely brave thing to do. We’ve got massive amount of respect and gratitude to these women,” Andrea says. The campaign has also been aided, she explains, by a letter of support from one of the sons of an undercover police officer – a fact which Andrea feels reveals just how deep the impacts of these police operations have been.

“We have all been hugely affected by this, but to have that state-orchestrated approach and a child being at the heart of it is just really quite awful,” she says.

Andrea spoke at the Scotland, Surveillance and Spycops conference in Glasgow on 23 June, which sees the launch of a coordinated campaign to extend the inquiry in England and Wales to include Scotland.

The Judicial Review challenging the decision not conduct an inquiry in Scotland will be heard in Edinburgh this July.