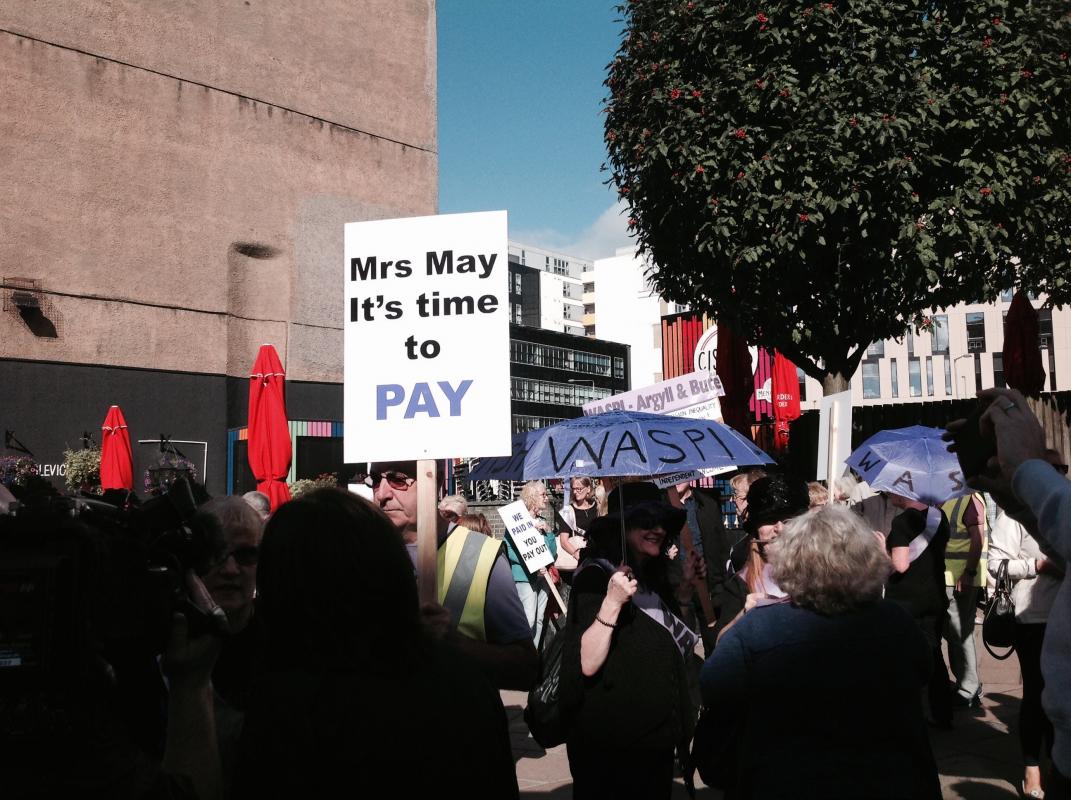 Marches across the UK and Scotland as women challenge state pension inequality for those born in the 50s.

WOMEN across Scotland gathered in Glasgow today [Friday 16 September] in protest over inequality in the state pension and the changes which have seen women born in the 50s denied equal pension rights for their working lives.

The march was organised by WASPI (Women Against State Pension Inequality), and took place in Glasgow city centre at midday with protesters handing out leaflets and talking to members of the public.

In Scotland over 243,900 women are affected by the age change in pension qualification from 60 to 66 and in the UK as a whole it has impacted on 2.6 million people, meaning a loss of income that would have otherwise been due under the old pension age.

"The treatment of these women is nothing short of a disgrace. We are asking all women born after 5th April 1951 to join us in our cause. Tell your friends and family. We need your help to keep the pressure on the government." Anne Potter

Anne Potter, co-coordinator for WASPI Glasgow and Lanarkshire, said: "The treatment of these women is nothing short of a disgrace. We are asking all women born after 5th April 1951 to join us in our cause. Tell your friends and family. We need your help to keep the pressure on the government. We are loud and proud and will not be forgotten."

Women born on or after April 6 1951 are directly affected by the UK Government's change despite the coalition agreement that promising no change to the women's state pension age before 2020.

However, according to former pensions minister Ros Altmann, Steve Webb and Iain Duncan Smith had begun proposing changes to the women's state pension age "within months" of the coalition coming together.

In Scotland, MP’s Mhairi Black and Angela Crawley have spoke out regularly on the issue and have given the group their firm support, but the group said it has the support of more politicians across party lines including Labour’s Pauline McNeill, as well as Scottish Green co-convenor and MSP Patrick Harvie.

Both Crawley and Black attended the march to George Square and spoke to CommonSpace on why the issues was of importance to them and the whole of Scotland.

Crawley, who is the SNP spokesperson for equalities, women and children, said: "These women have worked their whole lives and it’s time the UK Government puts its money where its mouth is and give these women the flexiblity and choice they deserve."

Mhairi Black MP, said: "Fundamentally it’s about priorities and important because right now, and I find this really funny – we have all this money to spend on things we don't need and that people don't want.

"But when it comes to a right, suddenly there's no money."

The First Minister Nicola Sturgeon also lent her support to the group and said in a statement: "I very much support the aims of your campaign. Many thousands of women who have worked hard and contributed to the economy stand to lose out financially.

"The UK Government must make transitional arrangements for women who, through no fault of their own, are seeing their retirement plans put in jeopardy as a consequence of political decisions. You can be assured that SNP MPs at Westminster will continue to support your aims, as will I."

It was originally in 2004 that the UK Government, wrestling over the issue of pension equalisation, sent forecast letters that campaigners said were unclear and received untimely.

According to WASPI the government's actions left women's “retirement plans shattered with devastating consequences” as the implemented changes were carried out with "little or no personal notice".

Former pension minister Altmann said that the UK Government had written letters to women stating what their pension would be but not clarifying that their state pension age had been changed and they were not going to get it at 60.

"These women have worked their whole lives and it’s time the UK Government puts its money where it's mouth is and give these women the flexiblity and choice they deserve." Angela Crawley MP

A survey, conducted by the UK Government in 2004, found that nearly 25 per cent of women were unaware of the state pension changes.

Yet the decision to write to them was delayed inexplicably until the financial year of 2009 to 2010, which saw some women get an increase in retirement age of six years with only seven years' notice.

Often older women have been disadvantaged in pensions throughout their life and are not able to access good quality private pensions or state pensions as a result of being more likely to work part time, suffering pregnancy discrimination in work or after work.

The effects of this means women are often overlooked for promotion, permanent full time work and the best pension schemes.

Talat Yaqoob, chair of Women 5050, who fight for equality representation and rights for women in all areas of society, business, academia, sport and politics, said: "The WASPI campaign is fighting for women who are too often forgotten – women who have reached or are reaching pension age disappear from our media and our politics and it is absolutely right that their voices are heard across all issues whether in Westminster or the Scottish Parliament.