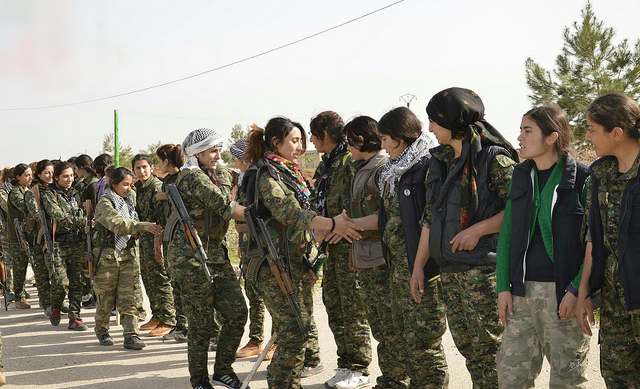 ‘Glasgow Girl’ Roza Salih speaks to CommonSpace about the Kurdish people’s global struggle for equality and autonomy, and how revolutionaries in Syria have succeeded in creating a radical democracy with women at its core

“MANY countries in the Middle East have forgotten women’s role – they have forgotten 50 per cent of the population.” Roza Salih, co-founder of Scottish Solidarity with Kurdistan, tells CommonSpace how the new governance system established in Rojava, Northern Syria, is revolutionary in more ways than one.

After decades of suppression of Kurdish language and culture by the Syrian state, and amidst a nation-wide civil war, the YPG (People’s Protection Units) and YPJ (Women’s Protection Units) – the armed wings of  the Kurdish Democratic Union Party – seized control of Rojava. Rojava, which has a predominantly Kurdish population, became a de facto autonomous region in 2012.

The movement to create a new and fairer society in Rojava is governed by an ideology advocated by Abdullah Öcalan – one of the founding members of the militant Kurdistan Workers’ Party (PKK) – called Jineology, or the science of women, which is a form of feminism.

“In most of our revolutions, women’s role has been forgotten.” Roza Salih

“It’s a movement giving a chance to women’s liberation, which is essential to a society. In most of our revolutions, women’s role has been forgotten.”

Roza Salih gained national publicity in 2005 when she and six other young women started the Glasgow Girls campaign against the poor treatment of asylum seekers in Scotland in response to the detention of a classmate.

Salih, who moved to Scotland from Iraq when she was 12 years old, will speak at an event at the City of Edinburgh Methodist Church this Saturday on the system of grassroots democracy in Rojava, as part of the Edinburgh World Justice Festival.

“I am concentrating on the concept of radical democracy in Rojava – democratic confederalism in contrast to the bureaucratic exercise of power. This is what the revolution in Rojava is about,” Salih says.

Rojava’s democratic confederalism, a radically different system to the oppressive and discriminatory policies of Assad’s Syrian Government, is a form of grassroots democracy delivered through local assemblies and direct democracy.

“The Öcalan liberation movement is designed to implement democracy in several forms. The people are involved themselves in decision making,” Salih explains. “If you think of a local council election, someone has to be elected to be involved. With democratic confederalism, there isn’t any system excluding people from power.”

The new society is based on a cooperative economy, and religious, minority and women’s rights are at the forefront.

Salih feels that the situation in Rojava is important to highlight, because such movements for social change often go unmentioned.  “People in this country talk about Syria but they don’t talk about the movement of people there, the YPG, the YPJ,” she says.

“This movement is very secular – it’s predominantly Kurdish people but there are also other minorities.”

Salih is clear that, while there are connections between the Kurdish community globally, the political situation in other parts of the world is not the same.

“In all parts of Kurdistan, the politics are so different and that needs to be understood. I come from Kurdistan in North Iraq myself, but the political parties are very different to Rojava.”

On 25 September, the autonomous region of Iraqi Kurdistan voted for independence by 92 per cent, with a turnout of approximately 72 per cent. The referendum was considered as illegal by the Iraqi Government, which has placed sanctions on the region in response to the vote.

The Kurdistan Regional Government announced this week that it will hold presidential and parliamentary elections on November 1, in an apparent attempt to strengthen its mandate for independence.

Comparing the movement in Iraq to that of Syria, Salih says: “In North Iraq, people have reached the point where they want self determination, but it’s a very different situation.

“I can’t deny they have women’s rights and groups, but there is that problem there – equality hasn’t been achieved.”

“I am in favour of self-determination for people no matter where they are.” Roza Salih

On the question of independence for the region, Salih is unequivocal: “I campaigned or independence and I am very in favour of self-determination for people no matter where they are.

“I believe the will of the people should be respected.

“The Kurdish people have autonomy, they have a government, so it’s just a case of passing it over to the Kurds.”

However, Salih is concerned that those in the Kurdistan Regional Government may not be driven purely by the interests of the people. “There may be political interests and parties may use their own interests like, ‘give us this or we will leave’,” she says.

“I’m changing my views every day on what is happening over there.”

Asked whether there is a sense of solidarity between Kurds across these different regions and political circumstances, Salih says: “Of course there is. We are all Kurds and we are aware of what’s happening around the world.

“Today we are suffering at the hands of states which have been created falsely.” Roza Salih

“Kurdish people have suffered so much, for example under Saddam Hussein when thousands of people were killed. Now, we want to be free. We want freedom.”

Salih says the Kurdish people have a shared history of oppression, but that this sense of solidarity extends well beyond the Kurdish community.

“Our land was divided by colonisation by other states and still today we are suffering at the hands of those states which have been created falsely,” Salih says.

“So of course we have unity, but we also have unity with other communities, wherever they are. If people are being oppressed, we support them.”

The event this Saturday will launch a week-long exhibition by Iranian Kurdish photographer Soran Qurbani highlighting the human costs of the Kurdish struggle against Daesh (ISIS) in Syria.

A further event on Monday will put the spotlight on media suppression in Turkey, where Kurds have been subject to human rights abuses for many years.

Find out more about the events here.