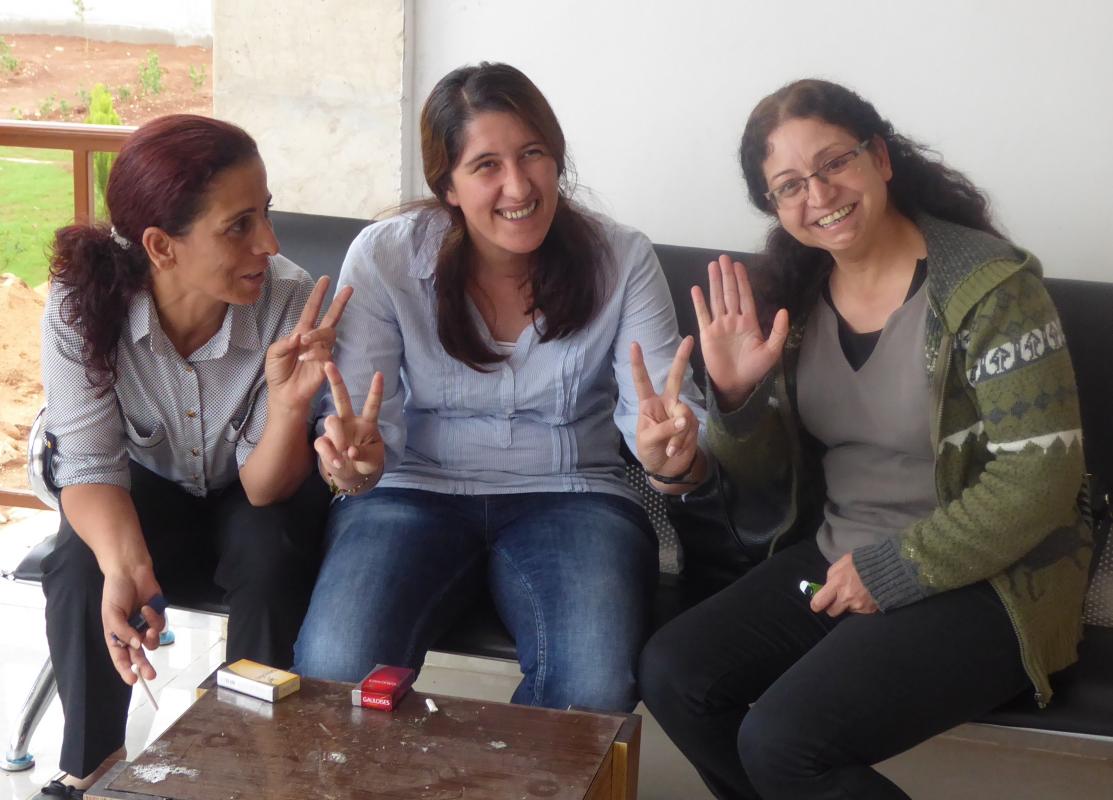 Dundee-based campaigner and academic Sarah Glynn shares her thoughts on the women’s revolution in northern Syria after visiting in May, exploring the huge successes and big challenges facing a historic movement seeking to transform a traditional middle-eastern tribal society through anti-capitalism with women at the vanguard

WHEN the Kurds and their friends in the autonomous Democratic Federation of Northern Syria use the revolutionary slogan ‘Jin Jiyan Azadi!’ – Women Life Freedom! – this is no empty phrase. They are summing up the essence of a revolution that has women’s freedom at its heart, both physically and philosophically.

When I visited Northern Syria with a women’s delegation in May, I learnt that the women revolutionaries were not just the young girls with guns so beloved by war photographers, but also middle-aged women in long floral dresses who are building a new society in the neighbourhoods where they live. This is a revolution of extraordinary ordinary people who are taking control of their own lives through a new bottom-up democracy.

In this transformation of a traditional middle-eastern tribal society, women are involved at the centre of the new democratic structures at all levels, as well as building their own women’s organisations. There is a long history of women’s participation in the Kurdish freedom struggle, and the centrality of women’s liberation has been ensured by the political writings of PKK leader, Abdullah Öcalan, who has spent the last 19 years isolated in a Turkish prison, but, just as his portrait presides over every progressive Kurdish organisation, so his ideas provide a constant source of reference and inspiration.

Of all the achievements of this Kurdish revolution, the liberation of women has probably made the greatest difference to people’s lives. For half the population, freedom means not only ending the control of Assad’s authoritarian Baathist state, which hadn’t even recognised Kurds as citizens, but also the removal of centuries-heavy patriarchal beliefs and practices that have regulated everything from civil society to family relations.

For Sara, who we met in Kobanê, when the Syrian regime withdrew control and the Kurds were able to set up their own autonomous organisations, it was ‘as though a rock had been lifted and there were green shoots underneath’. This is an image of oppression banished, but also of a new world that had long gestated in hiding, waiting for the opportunity to grow. Syria’s Kurds have nursed their revolutionary ideas over decades, especially since Öcalan and the PKK formed an exiled base in the country in the 1980s and 90s.

For those of us looking for a more inclusive alternative to the deeply-flawed democracies with which we are familiar, Northern Syria’s autonomous system, where everything is controlled as locally as possible, provides a living, if evolving, example of a different way of doing things. Although many people are still learning how to take part – which allows the main political party considerable influence via its educational and enabling role – and although many strategic decisions are made centrally, people’s involvement with the new systems and organisations demonstrates a commitment to making these more participatory structures work.

Central to this is the involvement of the women. Every significant organisation or committee is expected to have active women members, and female as well as male co-chairs – and during the course of our visit we met many of these impressive women. In addition, in response both to the importance given to women’s involvement and to the practicalities of moving from a traditional patriarchal society, there is a parallel structure of women-only organisations, confederated as Kongreya Star, the organisation who hosted our visit.

READ MORE – Building a new society against all odds: Scots activist tells of the hopes and challenges facing Kurds in Syria

Community mobilisation depends on talking to your neighbours, and women are playing a key role in knocking on doors and discussing with all the various family members. While women’s liberation is high on their agenda, they also address relations between different ethnic and religious groups.

In Manbij, where we met with members of the Women’s Council, the need for both these interventions is especially acute. Manbij was liberated from ISIS by Kurdish forces and their predominantly Arab allies in 2016, and is ethnically very mixed. ISIS had encouraged ethnic division as well as the subjugation of women. Unlike in the predominantly Kurdish areas, Manbij has no history of revolutionary organisation, but the women told us how they were inspired by their Kurdish comrades, as well as by the Kurdish women of the YPJ who helped liberate them.  Their palpable hope and optimism makes the current insecurity over the future of Manbij especially poignant.

Women are involved in all fields. Our meeting at the Women’s Economy Centre in Qamishlo demonstrated the ambition and potential of this revolutionary movement, but also the everyday difficulties of instituting fundamental change. While the rhetoric is avowedly anti-capitalist, and advances from big international companies have been rebuffed, economic change has so far been limited and piecemeal. The main work of the committee is the establishment of women’s co-ops. Most of these co-ops are very small, and difficulties include husbands who don’t see the need for their wives to work and question their abilities. The co-ops are meant to respond to community need rather than purely economic criteria, but at this stage their main role is to give the women involved the economic independence that can provide the basis for social freedom.

The flagship of the women’s movement is the women’s village, Jinwar. When we visited, this was under construction, with one house being used by the organisers, and the first household about to move in. The people involved were able to allay several of my concerns over the idea of a women-only village, however, there are clearly still problems to be resolved.

It is intended that the village will provide a home for some of the very many women who have been widowed or have escaped abusive relationships, as well as for those who might simply chose to live in a female environment. This women’s refuge is badly needed, but I was worried about the socialisation of children brought up in such a protected environment, and how well they would be prepared for interacting with a wider world. I was therefore glad to see that there was no sense of isolation. Women and men from nearby villages have taken an active interest in the village’s construction; and the educational programmes that are planned will be addressed to men as well as to women, since both have to change in order to change patriarchal society. This still leaves questions about the future of village households when children become young men, or women find new male partners.

The village is intended to be much more than a place for people to live; it will provide an example of a different way of living. Ecological considerations have prompted the choice of traditional mud-brick construction rather than the almost ubiquitous concrete of other new buildings, and the builders stress that this provides a more comfortable, as well as attractive, environment. Other plans include a centre for natural medicine. I hope that the practical approach so evident in the various places we visited will allow ‘female’ nurturing and personal care to be combined with the best of modern scientific practice.

Everywhere, the people we spoke to were clear about the scale of the task they have taken on in trying to change society. Looking specifically at the situation of the women, the difficulties, and also the necessity, of change can be measured in the growing divorce rate resulting from women asserting their freedom. But at the women’s organisations we visited, the natural and mutually respectful relations we observed between the men and women showed what is possible.

The growth of the green shoots of women’s freedom has been both remarkable and inspiring, but we need to be careful not to attribute to it powers that it cannot hope to live up to. Öcalan’s ideas have been liberatory, but they could ultimately prove a constraint. Extrapolating from his belief that women’s subjugation was the primal enslavement that led to the development of hierarchy, violence and state power, he concludes that the key to the good society lies with women, who must take over the revolutionary role that Marx assigned to the working class.

These ideas are taught under the title of Jineology, from the Kurdish jin, meaning women, and are based around a fundamental dualism. Power and violence are associated with masculinity and ‘capitalism and the nation-state are the monopolism of the tyrannical and exploitative male, while the feminine is associated with nature, emotional intelligence and communality. Jineology promotes these ‘feminine’ attributes, but it also acknowledges that this gendered division is social and not innate, and herein lies a contradiction. If our hope for a better future can be found in ideas and practices that are linked to the female sex only by convention, then this future should be achieved through the promotion of those practices, rather than necessarily in action by women; and the liberation of women, though an essential part of any liberatory movement, need not be sufficient to lead to wider revolutionary change. (As the UK’s women prime ministers have demonstrated, women are just as capable of donning the ‘male’ attributes of power and violence.)

Assigning women the role of the revolutionary class on the basis of gendered characteristics risks ossifying gender distinctions, as well as burdening women with expectations they should not have to bear alone. It can also result in overlooking and failing to address the economic causes of inequality. Even if we accept Öcalan’s view that hierarchical distinction began with the subjugation of women, it doesn’t follow that the liberation of women would reverse other inequalities.  The huge achievements that Öcalan has inspired must not prevent us from critical analysis of his philosophy; in fact they make this all the more necessary. The Kurdish women’s revolution is no holy grail, but it is a source of hope and inspiration for us all.