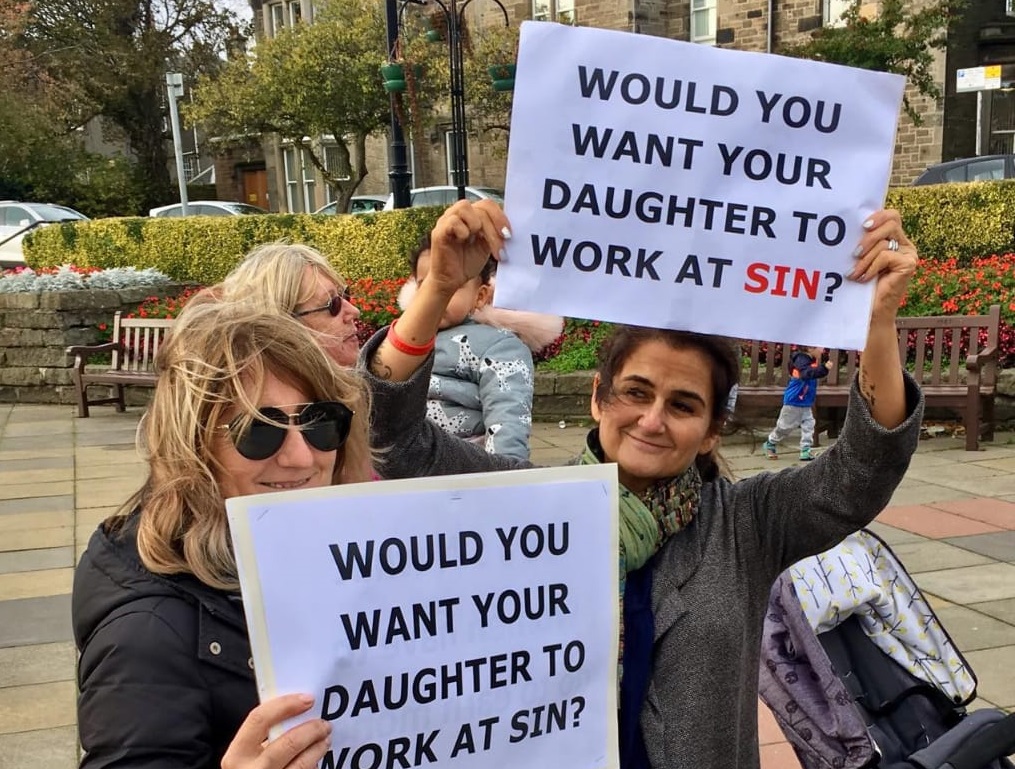 WOMEN TOGETHER FIFE have demonstrated in Kirkcaldy against the opening of a strip club in the town, criticising the local MSP for his lack of opposition to the new sexual entertainment venue.

Around 50 people protested outside the council Townhouse, a mere 50 metres away from where the strip club, Sin, is set to open on Friday 2 November.

Four people held a counter-protest saying Women Together Fife were trying to deny women jobs, but this was challenged by Marie Penman, one of the organisers of the Women Together Fife demonstration and a former councillor, who told CommonSpace that these were not “real jobs” as the women were not paid a fixed salary.

READ MORE – Tackling ‘lad culture’ on campus: How Scotland is taking on the problem

“They don’t get paid a salary, they have no union rights, they just get money stuck down their tights by men; they are sexually exploited. Imagine me going to work and just getting paid whatever the customer wants to give me. That’s not a real job, it’s disgusting.”

Penman said she was protesting because she “objects to places like these existing; objectifying and exploiting women.”

“It’s totally anachronistic to have a strip club opening in the 21st century,” she added.

“Fife council’s position on that is that we would set the level for [sexual entertainment] licenses at zero for Fife, we don’t want this kind of thing in our town,” Hamilton said.

David Torrance, SNP MSP for the Kirkcaldy constituency, was criticised for not opposing the opening of the strip club. He told Fife Free Press he was “neither for nor against it”, adding: “If it is run properly and doesn’t cause any problems in the vicinity then I don’t have a problem with it.”

Penman said she was “surprised” by the MSP’s stance considering the Scottish Government’s position, stated in a strategy document published in April on violence against women, that  “violence against women and girls encompasses…commercial sexual exploitation, including…stripping.”

Common Weal Fife have organised a petition calling on Torrance to oppose the strip club’s opening.

The petition, addressed to the Kirkcaldy MSP, states: “We the undersigned oppose the opening of Fife’s only strip club, ‘Sin’, in Kirkcaldy. As the sitting MSP for the area, your comments in the Fife Free Press, ‘I am neither for it or against it’ are not good enough. In the #MeToo age, there is no place for neutrality on this issue.

“Your further remarks about it bringing jobs to the area and that, ‘If it is run properly and doesn’t cause any problems in the vicinity then I don’t have a problem with it’, make things worse.

“As constituents and other concerned people, we demand that you publicly withdraw these remarks and undertake to take these concerns seriously.”

The petition currently has 277 signatures

Penman told CommonSpace that she had submitted a report to Police Scotland after men in a van drove near the protest on three separate occasions shouting sexist remarks.