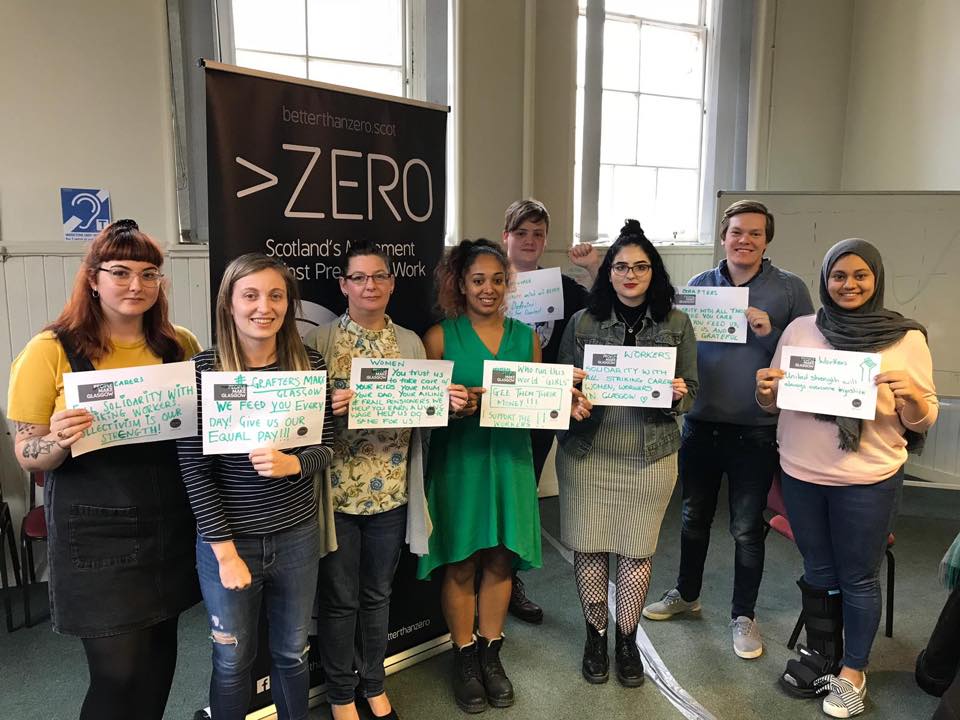 A REPORT published today (22 October) by the Scottish Trades Union Council (STUC) has found that people in insecure work, such as zero- and short-hours contracts, are concerned by a loss of control over their time.

STUC has called for action from employers and the UK and Scottish Governments to address the problems arising from “precarious work”, and on unions to find ways to organise isolated workers.

Entitled ‘Time, Control, Trust: Collectivising in Precarious Work’, the report lays out the findings of research conducted by the STUC and academics from the Universities of Glasgow and Strathclyde.

The research found that workers in precarious employment (such as temporary, zero- and short-hours contracts) were exhausted and had little time to spend with family or were struggling with multiple jobs to make ends meet.

The report suggested that this has left workers facing a “double burden” of being both time-poor and financially poor, and that this is taking a toll on mental health.

READ MORE: Richie Venton: Why a guaranteed 16 hour minimum working week is a demand worth fighting for

STUC general secretary Grahame Smith commented: “This report reflects years of research and offers the richest illustration yet of how far precarious work has penetrated into daily life in Scotland.

“Precarious work isn’t inevitable. Generations of trade union activism has allowed many people to live in comfort and security. The danger is that low wages, intensified work and zero-hour contracts are becoming normal practices in parts of our economy thanks to the pressure of welfare cuts and anti-union laws.

“These corners of exploitation are a threat to everyone’s living standards. The fight against precarity is thus a fight for all workers in our economy.”

Smith added that STUC was also keen to highlight the “only positive solution to this problem” in the form of the “unglamorous grassroots work of trade unions”.

The most recent official statistics indicate that there are 118,000 temporary workers in Scotland, over one quarter of whom say they have taken temporary work because they cannot find a permanent job.

There were 72,000 workers on zero-hour contracts in Scotland between October-December 2018, and 12.2 per cent of the overall workforce in 2018 was self-employed. Previous studies have shown that as many as half of self-employed workers are low-paid, while some employers use self-employment contracts inappropriately with the intention of limiting workers’ rights and paying lower taxes.

Supported by the findings, STUC recommended that the UK Government introduce a statutory right to an employment contract which reflects an individual’s normal hours of work and a statutory minimum contract of 16 hours per week, which can only be reduced by the individual worker, accompanied by a union representative.

The union also called for young workers to be paid the full adult minimum wage rate and for a £10 per hour minimum wage to be introduced.

The report added that employment rights should be legally enforceable “from day one”.

The research identified that “precarious workers” were often facing challenges around their employment rights, such as access to paid holiday, sick pay, maternity or paternity leave, difficulty meeting caring responsibilities and a lack of control over working time.

The report said that, in the increasingly prevalent “gig economy”, “time itself is being commodified”. For example, it was found that the “time-consuming battle to get the best shifts and rotas saps unpaid time from workers, contributes to stress, and leads to exhaustion”.

STUC has urged the Scottish Government to do more to encourage employers in all sectors to end precarious work practice and to support unions and employers in sectors with high levels of precarious work to agree recognition agreements and implement collective bargaining.

Under the Fair Work Framework, which is supported by the Scottish Government, employers are asked to meet five principles: Security, Opportunity, Fulfilment, Respect, and Effective Voice. The report recommended that the Scottish Government develop and effectively implement the Fair Work First agenda to “as many funding streams, business support grants and public contracts as possible” and that it prioritises Fair Work within procurement and contract compliance systems.

The research also found that “mistrust and competition” between workers in the insecure working environment was an issue and that this was used by employers as a means of control.

STUC pointed to the positive role of unions in addressing this issue by developing a “sense of collectivity”, and recommended that union campaigns focus on themes of “time” and “control” on their impacts on people in precarious work.

Picture courtesy of STUC/Better Than Zero