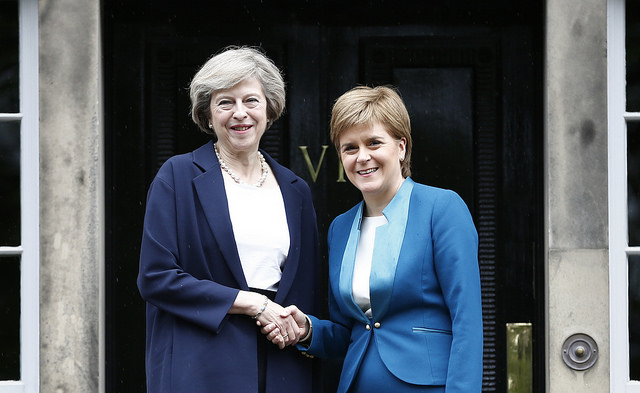 THE LEFT in Scotland have been “idle spectators” in the debate on Brexit, Scottish Socialist Party national co-spokesperson and former MSP Colin Fox has said.

With this in mind, the opportunities of leaving the EU for working people will be discussed at a Scottish Socialist Voice event at the Edinburgh Liddell Centre on Saturday 28 April.

Speaking to CommonSpace, Fox said the event was a sorely needed chance for the left to “get on the front foot and attempt to assert some agency” on Brexit.

“Our position in the SSP is that we voted to remain as the lesser of two evils.” SSP national co-spokesperson Colin Fox

“The Socialist Voice attitude is that Brexit is going to happen, so there needs to be discussion of how the left can influence the outcome,” Fox said.

The debate so far around Brexit, he said, has been “utterly sterile” and dictated by the interests of the Tory government on the one hand and the European commissioners on the other. “It’s death by drowning or death by hanging, so that poses quite a dilemma,” he said.

“The reality is that people’s working conditions are going down the toilet and it’s only going to get worse if we’re at the mercy of the Tories and the EU.”

As opposed to debating over holding another vote, rejoining the EU or raising questions over the tactics of the Leave campaign, Fox said the left needs to start seeking to influence the Brexit deal and the post-EU policy agenda.

The EU has been used as an excuse, Fox said, by successive UK and Scottish Governments for failing to progress on issues such as public ownership of CalMac or the railways. “This puts things on the agenda that we were told were off the agenda because of the EU,” he said.

Much of debate, Fox said, has failed to address these points and has focussed instead on the Single Market, Customs Union, the European Court of Justice, reflecting the fact that, first and foremost, “the EU is about markets”.

Much more attention should be paid to the flaws of the EU system itself, Fox said, which he described as “utterly undemocratic” and “neoliberal”.

“Our position in the SSP is that we voted to remain as the lesser of two evils,” he explained, adding that many voters in Scotland had felt the same way. Particular issues within the Leave campaign, he suggested, had made the prospect of voting to leave “unattractive”, such as the prominence it placed on “xenophobic attitudes”.

By contrast, Fox said that Labour leader Jeremy Corbyn had been “one of the few voices that has made sense within this debate” through his efforts to make the case for how workers might stand to benefit from Brexit.

“I think he shares much of the scepticism of the EU,” he said. “He alludes to this without really saying it when he talks about a ‘jobs-first Brexit’.

“But he’s in a dilemma because the right wing of his party, like Owen Smith, Chuka Umunna and Tony Blair are saying ‘let’s have a second vote.’ If he wasn’t leader of the Labour Party, he’d have been supporting Leave.”

For Fox’s part, he believes that what Theresa May describes as “bespoke Brexit” will be on the cards for the UK, making it more important than ever for the left to put the pressure on for a progressive policy agenda.

“If it’s a pick and mix, the left has the chance to say, if we’re taking back control, let’s take back economic control for working people.”

This would mean looking at policies like corporation tax, public ownership, improving workers’ rights, and “sweeping casualised working off the agenda”, he said.

Ultimately, Fox argued, the left has to avoid “ruling out the possibility of some successes”, and the Socialist Voice forum aims to open up that conversation. “That’s an initiative that deserves to be supported,” he added.

The event is free to attend and registration is available online here.