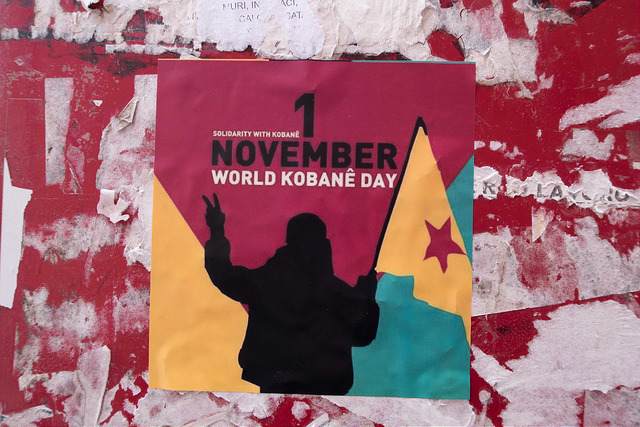 AN EVENT COMMEMORATING the third anniversary of the successful resistance against Daesh of the Kurdish people in the city of Kobane in Rojava, Syria will be hosted by Scottish Solidarity with Kurdistan in Glasgow next month.

The World Kobane Day event on 1 November will be addressed by Lord Provost of Glasgow Eva Bolander and will feature an exhibition of images of Kobane taken by photographer Soran Qurbani, a short film, and Kurdish dancing.

The event also aims to raise funds to send to the people of Kobane, who have appealed to the international community for support in rebuilding their community infrastructure which was largely destroyed during the conflict with Daesh.

“We hope the people of Scotland show solidarity on the anniversary of Kobane Day where YPG and YPJ protected the world and resisted darkness.” Roza Silah, Scottish Solidarity with Kurdistan

Roza Silah, co-founder of Scottish Solidarity with Kurdistan, said: “We hope that the people of Scotland show solidarity on the anniversary of Kobane Day where YPG (People’s Protection Units) and YPJ (Women’s Protection Units) protected the world and resisted darkness to embrace radical democracy.

“We hope you can join us to celebrate World Kobane Day and raise money for building a Scottish school in Kobane.”

Representatives of Scottish solidarity with Kurdistan met with the Kobane Legislative Council in order to identify what support they could give to Kobane’s redevelopment.

It was through this meeting that the goal of raising funds for a school was agreed upon, and female leader and teacher Fawza Abdi advised the group that the school would be named the Scotland School.

World Kobane Day is celebrated because of its significance to what Scottish Solidarity with Kurdistan describes as “the beginning of turning the tide against Daesh”.

Since then, the YPG and YPJ – the armed wings of the Kurdish Democratic Union Party – have continued alongside their allies in the battle to force Daesh out of northern Syria. Many people have lost and continue to lose their lives in this struggle, and as such the event in Glasgow aims to offer solidarity as the battle endures.

The event, based at Unite the Union offices in Glasgow, will also include Kurdish tea, coffee and cakes, and will cost £5 to attend, with all proceeds going to the Scotland School project.

Scottish Solidarity with Kurdistan organises a range of events and activities to raise awareness in Scotland about the experiences of Kurdish people across the Middle East.