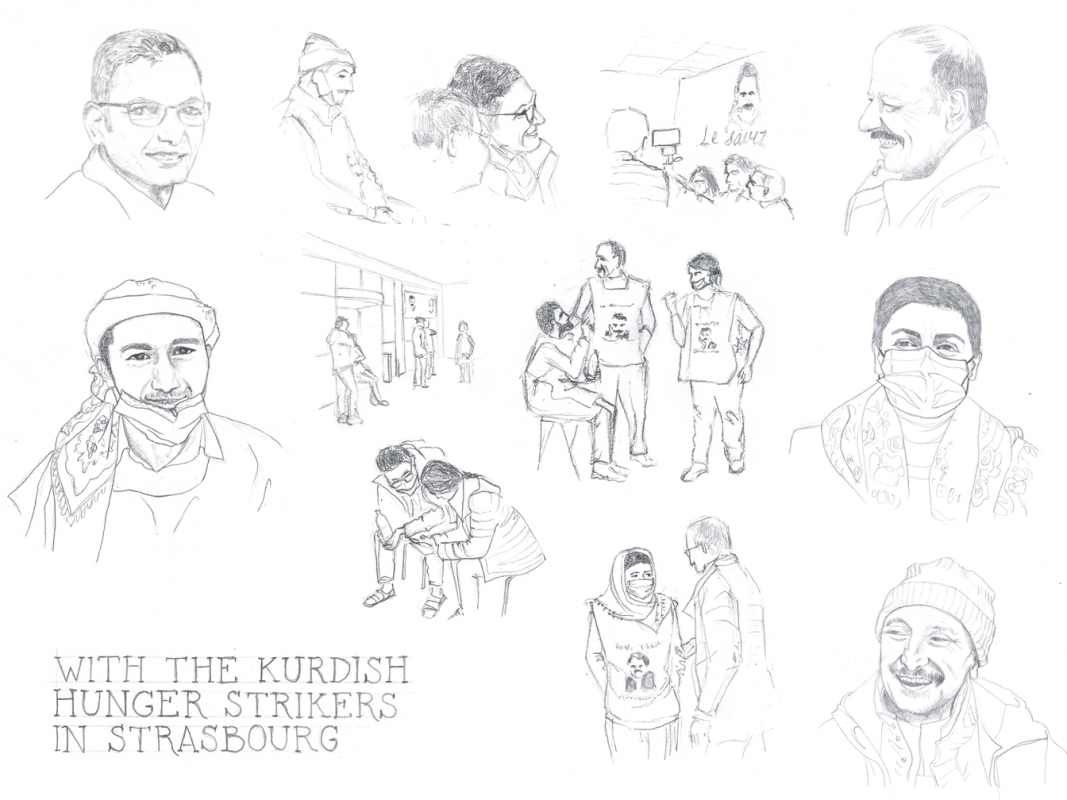 AS THE situation of the hunger strikers gets more and more desperate, and the world continues to look away, the Kurdistan National Congress (KNK) has sent out an appeal for people to write to the European Committee for the Prevention of Torture (CPT) and ask them to perform their fundamental purpose.

If you care about peace, democracy and human rights, and are concerned about the lives of the most committed and selfless women and men you could hope to meet, then please write to the CPT and call on them to put pressure on Turkey to allow Abdullah Ocalan his basic human rights, as the hunger strikers demand.

You can use the letter below as a basis. Either copy it completely or amend it as you like and send it by email to the addresses given.

I made these drawings of the hunger strikers (pictured above) in Strasbourg nearly four weeks ago. Since then they have become largely confined to their beds. Today they will have gone 103 days without food.

They don’t like to talk about their health, but they are undergoing all sorts of pain and discomfort, as well as the imminent fear of organ collapse. Leyla Guven, who started these hunger strikes, has now reached day 142.

CC Head of Division for Turkey of CPT

I am writing to you to express my deep concern at the lack of concrete action by the Council of Europe and the Committee for the Prevention of Torture with respect to Turkey’s continued denial of Abdullah Ocalan’s basic human right to be visited by his family and his lawyers. We appreciate your recent report on this issue, but if it is to be more than hollow words it needs to be followed up by action. The CPT must insist on their right to visit Ocalan in prison, and then promptly publish a follow-up report, and – crucially – you must put pressure on Turkey to act on your findings.

Ocalan is recognised as their leader by millions of Kurds, and you don’t have to be Kurdish to recognise the huge impact of his ideas in bringing democratic practices to Northern Syria, building bridges between different ethnic groups and – especially – ensuring women can take a full part in society. In the last two decades, Ocalan has made repeated attempts to negotiate a peaceful and respectful future for the Kurds in Turkey, and the respect that he himself commands makes his role vital to any peace settlement between the Kurds and the Turkish Government.

Ocalan’s importance extends well beyond the Kurdish community, but the immediate issue is simply a matter of the abuse of human rights by a member of the Council of Europe. Ocalan’s isolation contravenes European Human Rights legislation, the UN Mandela Rules for the minimum treatment of political prisoners, and Turkey’s own constitution.

As you will know, thousands of Kurds have responded to the world’s failure to take heed of this by going on indefinite hunger strike. 14 of them are in Strasbourg because they believe that the Council of Europe can and should be acting to help. As the weeks wear on, their strength and health is visibly failing. We expect bad news every day, and yet the size and determination of the movement is only growing stronger.

This demand for help is putting to the test European democracy and civilised values. The hunger strikers have put their lives on the line in the belief that the world will listen, and that the Council of Europe and the Committee for the Prevention of Torture will act to support basic human rights. They are prepared to take their hunger strike through to the end, but they do not want to die. I urge you not to let them down, and not to let down the fundamental principles on which these institutions are founded.