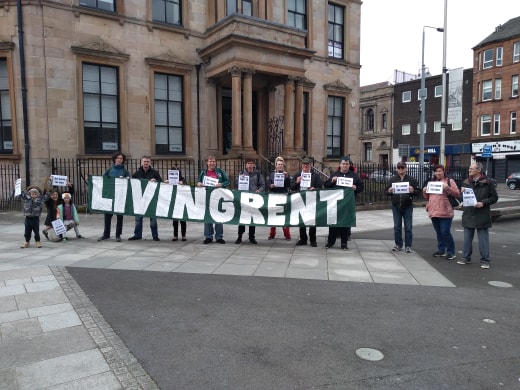 WYNDFORD tenants have won new negotiations with their housing association, after initial talks regarding resident grievances over a heating scheme accused of driving fuel poverty in the Glasgow estate were cancelled by management.

The Wyndford Tenants Union (WTU), organised by residents of the Maryhill community, protested outside the offices of Cube, the Wyndford Housing Association, after planned negotiations were cancelled by the association’s director.

Once they began protesting outside, they were invited inside to meet with director David MacKenzie.

The union is organising throughout the community against the impact of changes in the Wyndford District Heating System (WDHS) introduced in 2012, which today serves around 1800 of the Wyndford’s 1900 households and is administered by energy giant SSE.

Read more: Freezing through winter, but fighting back with the union – Scott’s story

The union fears that a rise this month in the daily standing charge for heating from 44p to 48p will push more residents into fuel poverty and debt.

There are also concerns that the replacement of pay-as-you-go with quarterly energy payments will hurt residents on lower incomes who may struggle to budget over longer time frames.

WTU told CommonSpace that a meeting to discuss these and other issues had been agreed for Tuesday 7 May with MacKenzie, but that he had later cancelled it.

Wyndford resident and union member David Cooke said: “The Wyndford tenants had secured a meeting for today but on Friday it was cancelled because David MacKenzie from Cube did not want us to have residents outside the Cube office, making this issue public. 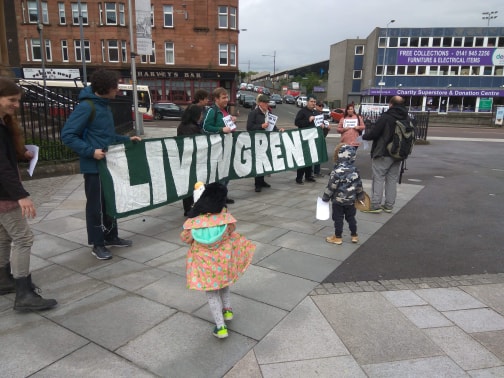 “I emailed SSE to see what was happening and they confirmed via email what we understood as the reason for the meeting being cancelled. SSE said there was a suggestion of some sort of planned protest. They went on to say they were sure we’ll get a chance to have a meeting soon.

“We were not planning a protest, more of a rally on the issue and in support of the negotiation meeting but now due to the actions of Cube we have no option but to have a protest as we will not accept the bully tactics from the Cube boss.”

Without the negotiations going ahead, WTU decided to protest at the Cube offices in a display of defiance.

The protestors stood outside association offices on Gairbraid Avenue, chanting “David MacKenzie, time to negotiate!” until representatives were invited to enter the building. However, the union refused to send representatives, with all protesters entering the building instead. MacKenzie then offered to meet for talks next week. 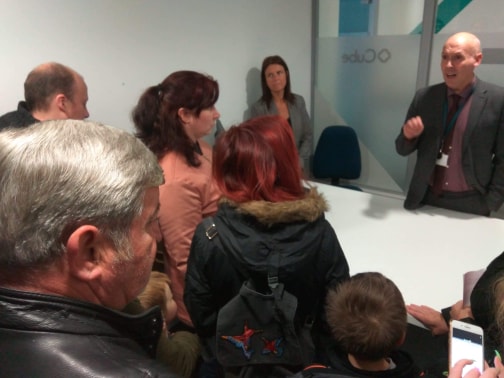 Shortly before the protest, Cube told CommonSpace they would be happy to meet with the union “going forward”.

A Cube spokesman said: “The fact is we did agree to meet representatives of the tenants’ union and would be more than happy to speak to them going forward.

“The other important point is that standing charges and quarterly billing issues are a matter for the energy company.

“That said, we’ve been in touch with every single tenant involved and offered all the support we can in the circumstances.”

Read more: More than half of Scots in fuel poverty, survey suggests

However, SSE told CommonSpace that they had expected to take part in negotiations, hoped that negotiations would take place in future, and said questions about why the negotiations had been cancelled should be put to Cube.

The Wyndford has become one of the most active fronts in the Scotland wide fight for tenant power in recent years. WTU is affiliated to the nation wide union Living Rent.

CommonSpace reported last month that one Wyndford estate resident, Scott Carroll, broke down after being unable to switch his heating on in his flat following a period in hospital with pneumonia.

A household is defined as in fuel poverty if they are spending more than 10 per cent of their income on energy costs. Nearly one in four Scots – 613,000 people (24.9 per cent) – are currently in fuel poverty, according to the most recent Scottish House Condition Survey.