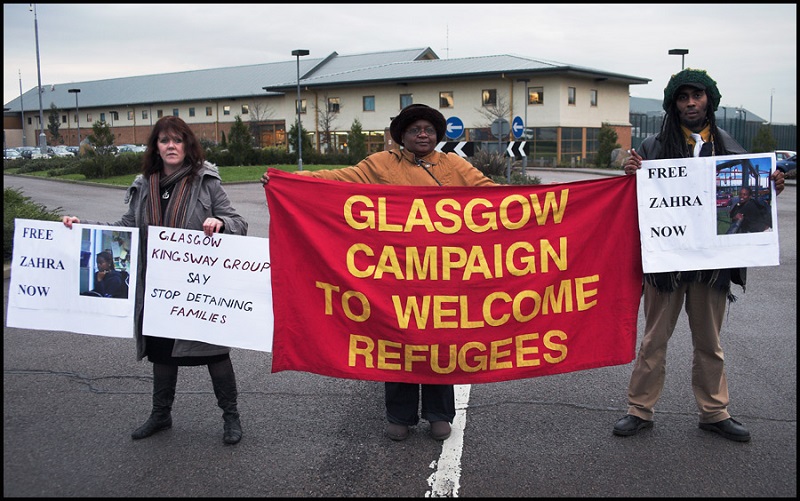 SOLIDARITY from Glasgow will be sent to over 120 women on hunger strike at the infamous Yarl’s Wood detention centre on Thursday (8 March), the protest held outside the Border and Immigration Office in Glasgow will demand an end to the “bullying” by the Home Office of detainees on strike.

Organisers of the protest are also asking supporters to pledge to join the 24-hour “freedom fast” organised for International Women’s Day to amplify the demands of those on hunger strike in Yarl’s Wood.

Over 120 women detained at the immigration removal centre in Bedfordshire, dubbed a “place of national concern” by the chief inspector of prison, have been refusing food for two weeks.

The organisers of the protest, Glasgow Unity Centre, said: “This protest has gathered momentum and has escalated into work strikes and occupations. The strike is a refusal to submit to institutionally racist detention conditions which is an integral part of the ‘hostile environment’ policy currently being enforced by the UK Government.

“On Thursday the 8 of March, the strike will be in its second week, we will be gathering outside the Glasgow Home Office to demand that they immediately stop bullying the hunger strikers with threats of expediting pending asylum claims; accept their demands; close all detention centres across the UK and show our support and solidarity for detainees in Yarls Wood and detention centres across the UK.”

As well as the protest and “freedom fast”, organisers say supporters are encouraged to sign the petition calling for the Home Office to accept the demands.

On Saturday evening the Home Office wrote to the women on hunger strike threatening to expedite their extradition and refusing to listen to their demands.

The UK is one of a few countries in the world which operates a practice of indefinite detention, where those identified for deportation can be detained without trial awaiting the outcome of appeals.

An end to indefinite detention is central to the demands of those on hunger strike, and their supporters say the practice is “inhumane”.

Read more: Behind the Wire: Inside Dungavel – an exclusive short film

SNP MSP Christina McKelvie, a long-time campaigner for an end to the practice of indefinite detention, has submitted a motion to the Scottish Parliament, scheduled to coincide with other action, supporting the women on hunger strike and calling on Holyrood to send its support and demand the UK Government ends the practice of detention without a time limit.

Speaking to CommonSpace, Christina McKelvie said: “The inhumane and degrading treatment of the women in Yarl’s Wood has continued for far too long and the UK Government must be held accountable for their negligence.

“This is not the first time that reported abuses within the centre have been highlighted. Previously, the UN’s Special Rapporteur on Violence against Women, Rashida Manjoo, had been denied access by the Conservative UK Government to investigate reported human rights abuses and sexual assaults within the centre.

“The hunger strike is a clear culmination of the appalling treatment that the women of Yarl’s Wood have had to endure as a result of the UK Government’s policy of indefinite detention without time limits.

“The hunger strike is a clear culmination of the appalling treatment that the women of Yarl’s Wood have had to endure.” SNP MSP Christina McKelvie

Dungavel detention centre, a “short-term” holding facility near Glasgow Airport also houses people awaiting deportations, and CommonSpace sources familiar with the centre’s practices said that although no hunger strike was taking place at Dungavel, detainees experienced similar conditions to those at Yarl’s Wood.

A Home Office spokesperson said in earlier statements that the health and well-being of those on strike was being monitored, but said that the strike would not change individual outcomes.

The Glasgow protest begins at 4pm on Thursday, and full details can be seen on the event organisers page.