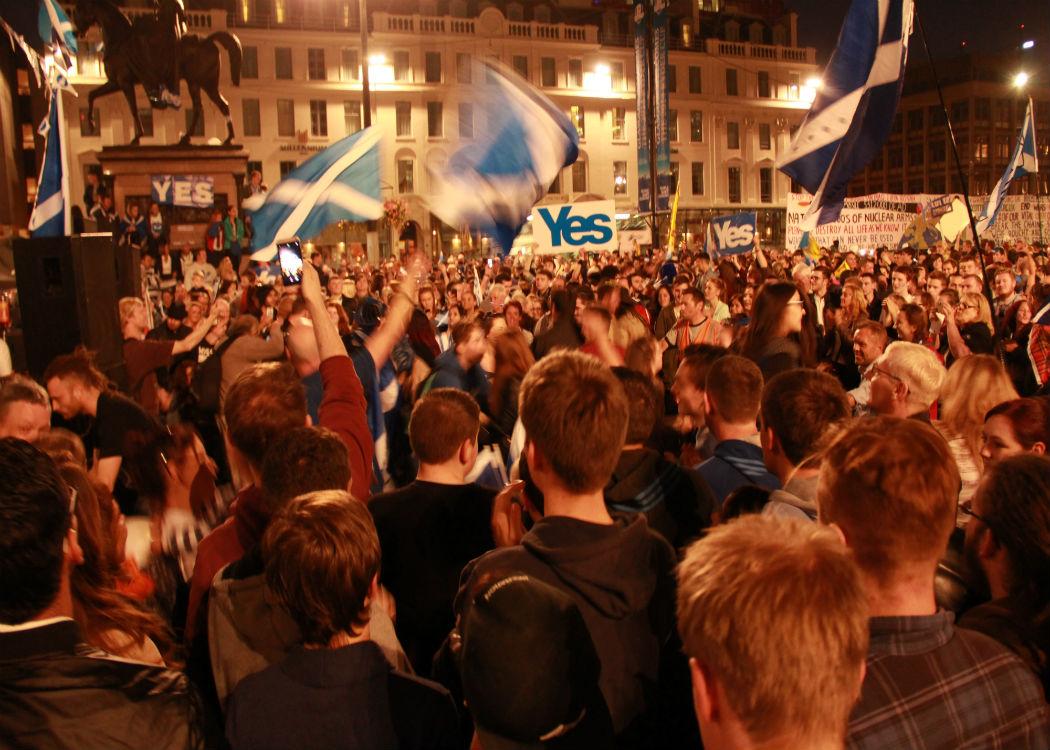 AN ENTIRE generation of political activists was created by Scotland’s independence referendum campaign.

The Yes side of the debate in particular spawned a massive ground campaign, taking place in communities around the country.

CommonSpace takes a look at just a few of those campaigners and asks what impact the referendum had on their lives and how it continues to influence them now.

Then : During the referendum Ross Colquhoun was campaign director for National Collective, the arts and culture campaign for Scottish independence.

Now : He now works as a strategist for the SNP, which he sees as a continuation of his work in the independence movement. He was one of the organisers of the SNP’s huge rally in the Hydro in Glasgow in November 2014.

Quote : “It’s inspired me to dedicate the rest of my life to helping to create a better Scotland for the many, and not the few. What inspired me the most during the referendum was witnessing normal people doing extraordinary things, the many activists and groups across Scotland who contributed their time voluntarily for a cause they believed in.”

Then : Cat Boyd was a leading activist in the Radical Independence Campaign (RIC) speaking, as so many did, at dozens, even hundreds of meetings and rallies across the country. She also co-authored a book “Scottish Independence: A Feminist response”.

Now : She is now involved in Rise, a new radical left wing electoral coalition, and remains a trade union activist. She has a weekly column in The National newspaper.

Quote : “I think it’s now undeniable that the arguments for independence were fundamentally about inequality and power. The referendum was about breaking away from the status quo.”

Then : Robin McAlpine launched Common Weal, a self-styled ‘think and do” tank during the referendum campaign. He campaigned all over the country including at local Common Weal groups and local Yes events. He oversaw the publication of a book of egalitarian policy proposals, the mainstay of Common Weal’s work

Quote : “There has always been an attempt by opponents of independence to present the campaign as a big, lumbering, centralised and crucially dehumanised thing. It was nothing of the sort. If you looked at any individual bit of the campaign it seemed remarkably small and fragile, people scraping money together from their own pockets to rent a hall and print some flyers. But it was incredibly, wonderfully vibrant and chaotic.”

Then : Liam McLaughlin campaigned for a Yes vote in Easterhouse, which quickly became a hub of activity and media attention for the RIC and the Yes cause in the East end of Glasgow.

Now : After the referendum he stood for the SSP in the Glasgow East constituency at the General Election, and joined its leading national executive.

Quote : “The indyref changed my life because it showed me that politics really can inspire, bring so much hope, and raise people’s expectations. It’s a time I’ll never forget and the likes of which I’ll probably never experience again, regardless of when there’s an IndyRef2.”

Then : Dr Philippa Whitford became a feature of the Yes campaign after a talk she gave on the dangers faced by the Scottish NHS in the event of a No vote went viral. She was then a practicing breast cancer surgeon.

Now : Following the referendum she joined the SNP and became MP for Central Ayrshire. She is the NHS spokesperson for her party at Westminster.

Quote : To Yes Clydesdale: “The wonderful thing about this campaign is, you do not need a DNA test, all you have to do is live here and want to build the new Scotland.”

Then : As a Women for Independence (WfI) organiser Kathleen Caskie helped in the collective management of the national campaign which mobilised thousands of women across Scotland to work for a Yes vote and for a Scotland which advanced women’s interests.

Now : After the referendum WfI became more formal. Caskie helped write the new WfI constitution, design the new website, organise a new formal membership, and continued to organise local and national events . The organisation is now more geared to its own distinctive cause than it could be during the frenetic campaign for a Yes vote.

Now : He now helps organise Rise, and works in several jobs. He writes occasionally for various newspapers and online publications.

Quote : “The independence referendum represented two things in particular. The continued decay and atrophy of the British establishment, and the effective reconstruction of a Scottish radical left alternative, all be it an alternative still in its early stages of development.”

Then : During the referendum he sang all over Scotland for Yes group fundraisers and on the streets, to give an extra presence to the grassroots campaigning. He also wrote a number of songs and released a CD, made available online for free during the final week of the campaign.

Now : Since the referendum he has remained active and continued doing fundraising gigs for continuing Yes groups, plus helped organise pro-independence musicians through Musicians for Independence.

Quote : “The indy referendum showed how music could be a powerful political weapon and how much creative talent was out there as increasing numbers of musicians joined in.”

Then : During the referendum, Daly became interested in politics, discussing his decision to vote Yes with friends and family and reading about political systems in the country.

Now : Since the referendum Jordan has become one of Scotland’s leading activists . He co-founded the Time for Inclusive Education (TIE) campaign to work for same sex relationship and sex education to take place in schools to counter discrimination. He is now taking his case to the Scottish parliament . He is involved in a number of other initiatives including Cumbernauld Against Poverty. He describes himself as a “referendum baby”.

Quote : “I owe a lot to the referendum, as it has spawned an abundance of activism and given me the confidence to tackle issues directly myself. I’ve met a lot of brilliant people that I now work with, particularly Liam [Stevenson] – who’s become one of my closest friends, and we’d never have met had it not been for the referendum. He was instrumental in launching TIE with me.”

Then : As co-convener of the Scottish Greens and a campaigner in Radical Independence, Chapman was one of many who toured the country speaking at meetings and rallies and witnessing the extent of the movement. She believed that the new participatory ethos could underpin a new type of politics after the referendum.

Quote : “The indyref movement showed that, if we can get away from the cynical politics of Westminster, we can re-engage people in the crucial debates around their lives and their world. We can mobilise against austerity and weapons of mass destruction, in favour of a society based on equality and democracy.”