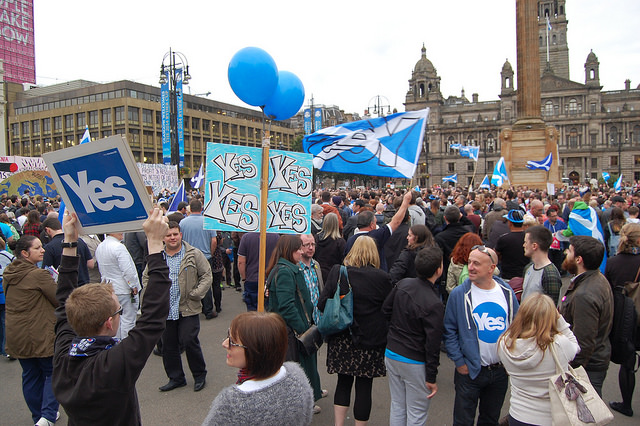 The SNP’s motion to spring conference would see a Scottish currency after independence officially endorsed, but would establish a process for testing the preparedness of an independent Scotland for a currency which may see it never come to pass

THREE members of the Yes Scotland 2014 advisory board have warned that an SNP endorsement of the “divisive” Growth Commission report could hinder the possibility of a united campaign in a future independence referendum.

Fox, Harvie and Kane were part of the cross-party and no-party Yes Scotland official campaign in the 2014 independence referendum, but warned that such unity may be difficult if the substance of the Growth Commission is backed by the SNP at its conference on 28 April.

Fox issued a statement on Tuesday [5 March] which said that if the Growth Commission’s conclusions were put at the front and centre of an independence campaign by the SNP it “will torpedo the prospect of a 2014 style united Yes campaign.”

He added: “The Scottish Socialist Party played an important part in the Yes campaign of 2014, one that was widely appreciated. I sat on the Yes Scotland Advisory Board and played a constructive, collegiate role. But we will be unable to do so again if the Growth Commission plan is put at the heart of Yes2.

“We will not make a case for independence that says it’s ‘business as usual’ because we see Independence as utterly rejecting the failed model associated with the City of London and a faceless, unaccountable multinational elite. We see independence offering a unique new vision of Scotland one which puts the material wellbeing of the working class majority before greater riches for an out of touch, over-privileged elite.”

Asked if he agreed with Fox that endorsement of the GC report’s findings could damage an indyref2 campaign, Kane said: “I think it would.”

He added: “The ‘six tests’ the Commission have set for the viability of an independent currency are themselves undermined by the ‘interim’ proposals for sterlingsation. This makes it harder to build up reserves needed, and keeps the Scottish economy in line with Westminster macro-financial priorities.”

Kane, who sits on the pro-independence Common Weal think tank’s board – which has developed an independence prospectus based on establishing a Scottish currency on independence day after a three year transition – said that  it would be a big mistake to tie an independent Scotland’s economy to “post-Brexit Britain”.

“We should start building the economic institutions we need from the first day of indy, not immediately hobble ourselves to a post-Brexit Britain, dedicated to an increasingly brutal and deregulated ultra-capitalism. Instead, I approve of Common Weal’s transition plan,” Kane said.

Harvie, who’s pro-independence Scottish Greens back the creation of a Scottish currency after independence, told CommonSpace: “The SNP’s Growth Commission has been widely criticised, and the wider campaign for independence would be well advised not to base an economic plan on this divisive report.”

The motion has also come under fire from within the SNP, with journalist and former SNP MP George Kerevan describing it in his column in The National as “the worst of all worlds” and a “muddle” between “the Growth report and the more radical concerns of the membership”.

“Better to write a new, more sweeping economic policy document, one that looks forward rather than backward. And dump the six tests,” he added.

The six tests proposed in the Growth Commission are that before moving to a Scottish currency it must first be proved that an independent Scotland: is “fiscally sustainable”, defined as reducing the deficit to under three per cent within five years; developed sufficient credibility on international money markets, that a currency would better meet the needs of households and businesses; that foreign currency reserves – probably worth about £30-40 billion – have already been built up; that Scotland has become de-linked from rUK in its trading and invesment patterns; and is de-linked from rUK in terms of its economic cycle.

In a report published in June last year, Common Weal head of policy & research Dr Craig Dalzell found that the tests were “barriers” rather than targets and would “act against the act” of creating a Scottish currency.