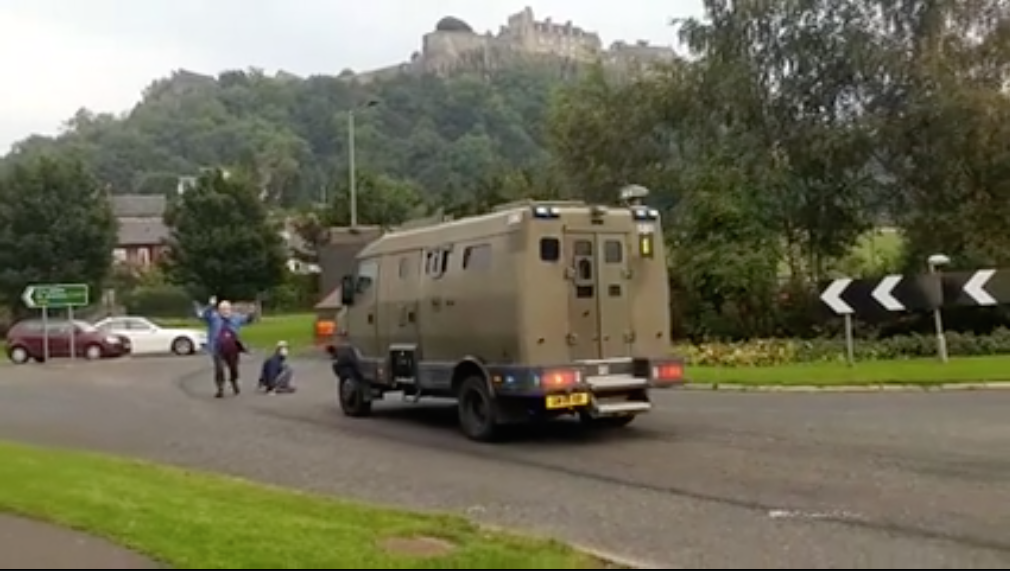 A CONVOY OF WEAPONS OF MASS DESTRUCTION was stopped yesterday evening (Friday 16 September) in Stirling after direct action from Campaign for Nuclear Disarmament (CND) activists.

A video released by University of Stirling CND shows two men halting the convoy by blocking the path of one of the trucks as it entered a roundabout near Stirling castle.

One man lay underneath the truck until being dragged to the side of the road by security officials.

"Nuclear Weapons passed through Stirling today at 1700 and our activists were there to meet them. The convoy was stopped for about 20 minutes." CND

The action is one of the latest protests to target the convoys, which regularly carry nuclear weapons across Scotland’s roads to and from the weapons bases at Coulport and Faslane.

The CND society, describing the incident, stated: "Nuclear Weapons passed through Stirling today at 1700 and our activists were there to meet them. The convoy was stopped for about 20 minutes."

In August 2014 the Sunday Herald revealed a series of 70 safety lapses connected to the convoys. In January this year SNP MP Owen Thompson sought a ban on the convoys, describing their activity as an “unacceptable risk to public safety”.

The dangers and radiation of nuclear weapons has led peace campaigners to mount a 70 year struggle against weapons of mass destruction.

The Tory government is pushing ahead with plans to renew the UK’s nuclear weapons system, Trident, at an astronomical cost of towards £200bn, and in conflict with the vast majority of MPs and MSPs in Scotland.