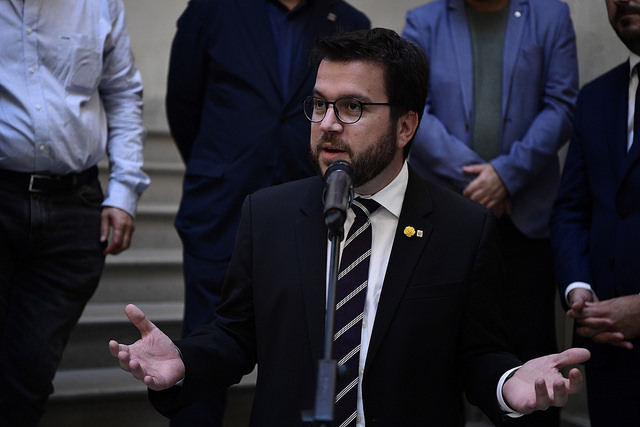 Speaking at the SNP conference after meeting with Nicola Sturgeon, Catalan vice president Pere Aragonès spoke in favour of “international solidarity” between Scotland and Catalonia

THE VICE PRESIDENT of Catalonia, Pere Aragonès, has said that Scotland “will always have our support” in calling for a second independence referendum at a time of the Scottish people’s choosing.

Drawing comparisons with Catalonia’s own experiences since the attempted suppression of its 2017 plebiscite while addressing a fringe event at the SNP’s conference in Glasgow today [8 October], Aragonès emphasised that independence could only be achieved by democratic means.

Aragonès said: “When you decide [to have another referendum], you will always have our support.”

In addition to pledging the Catalan Government’s support for a future Scottish vote, Aragonès expressed his certainty that Catalonia “will have our victory, and in a few years, we will have good relations between two independent countries.”

“When you decide [to have another referendum], you will always have our support.” Catalan vice president Pere Aragonès

The Catalan vice president made these statements following a meeting with First Minister Nicola Sturgeon on 7 August, at which the two reportedly agreed on the need for new independence referendums for both Scotland and Catalonia.

Commenting in the aftermath of what he described as “a very productive meeting” with the first minister, Aragonès said: “We both agreed that democracy is the only way; democracy and perseverance.”

The Catalan News Agency has also reported that both leaders agreed to work on strengthening economic cooperation between the Catalan Finance Institute and the new Scottish National Investment Bank. Aragonès elaborated on these hopes today, stating that “there are several areas – economic, cultural, social – in which we [the Catalan and Scottish Governments] can cooperate.”

Aragonès also gave Sturgeon a yellow ribbon – a symbol of solidarity with pro-independence Catalans currently imprisoned or exiled, including Aragonès’ predecessor, Oriel Junqueras – which the first minister accepted and pinned to her jacket. Though a date has not been announced, Sturgeon is expected to visit the Catalan capital of Barcelona at the invitation of Catalan president Quim Torra, who she met with earlier this year.

READ MORE: Aamer Anwar speech to Catalonia’s Diada in full: ‘Independence is your cause and you do not walk alone’

Speaking today under the auspices of the European Free Alliance (EFA), a progressive coalition of European parties seeking either independence or enhanced regional autonomy, Aragonès spoke alongside Lorena Lopez de Lacalle, EFA vice president and secretary of international relations for the the pro-independence Basque social democratic party Eusko Alkartasuna, on the right to self-determination.

Reflecting on the repressive tactics unleashed by Spanish authorities on Catalan voters and the organisers of the outlawed 1 October referendum, Aragonès observed that the Scottish Government was “the first government in Europe” to condemn the violence of the Spanish authorities.

He also extended thanks to the Scottish people for the support shown to the exiled former Catalan education minister Clara Ponsati during Spain’s attempts to extradite her on charges of rebellion: “Thank you for defending Clara.”

“We will keep fighting and organising for a binding referendum; we will keep defending democracy, because democracy is the only way of having the consent of the people.”

Aragonès praised Scotland by quoting Voltaire: “We look to Scotland for all our ideas of civilisation.”

The Catalan vice president’s visit to Scotland follows a week of heightened tension in Catalonia, as disagreements between Junts Per Catalunya (JxCat) and Esquerra Republicana de Catalunya (ERC), the two ruling pro-independence parties of the Catalan Government, provoked rumours of a new election until an 11th hour show of unity between Aragonès and Quim Torra.

In a joint statement last week, Torra and Aragonès committed to maintain the stability of the present Catalan Government until verdicts are delivered in the cases of those charged with rebellion for their role in organising the 2017 vote. These verdicts are not expected before spring, 2019.

Aragonès said: “It is reasonable that different parties have different formulas and proposals to solve difficulties. We are committed to coordinating them better before taking them to the Parliament plenary session.”