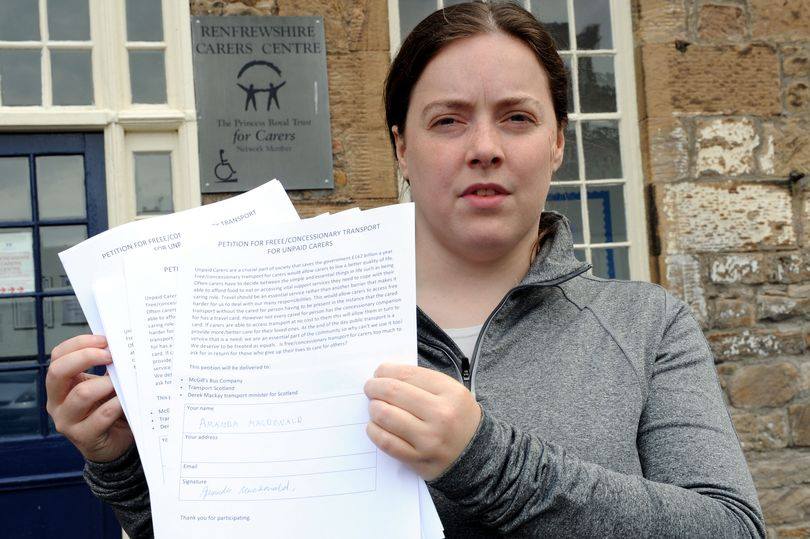 A PETITION CALLING for the National Concessionary Travel Scheme (NCTS) to be extended to all unpaid carers is currently being considered by the Public Petitions Committee of the Scottish Parliament, thanks to Amanda MacDonald (pictured), a volunteer with Carers Trust Scotland’s Young Adult Carer Voice Project.

MacDonald launched the petition after struggling with transport costs herself when she was caring for her mum, who passed away last year. Her efforts have received the support of a range of organisations including the Coalition of Carers, Carers Scotland, Enable Scotland, and Carers Trust.

The petition is also available to sign on Change.org, where over 3, 730 people have signed so far, and has been backed overwhelmingly by the Scottish Youth Parliament (SYP) after two MSYP’s for the Carers Trust Scotland, Lauren Baigrie and Amy Barbour, raised a motion at the SYP’s most recent sitting.

“Many carers face huge financial difficulty, and as a result of this they are unable to have much of a social life even if they can find time away from their caring role.” Amanda MacDonald, campaigner

At present, carers are able to travel free as a companion to the person for whom they’re caring, where that person is in receipt of a specific rate of benefits related to their disability or if they are registered blind. Campaigners are asking for free or discounted travel to be extended to all carers, including when they are travelling alone.

Speaking to CommonSpace, Amanda MacDonald said that she was urging people to get behind her petition “to make a real change to the real unsung heroes of today’s society”.

She said: “Many carers face huge financial difficulty, and as a result of this they are unable to have much of a social life even if they can find time away from their caring role due to the barrier of transport costs.

“The simple task of getting to the shops, the many visits to the GP, collecting medication from the chemist or doing any of the other things that come as part of the routine that carers face on a day to day basis becomes a hard task when living on such small income.”

“The cost of travel may not seem like a lot of money to many however £4.20 (in my local area) per adult a day adds up to over £29.00 a week. Of course travel costs vary dependent on where you live and where you are required to travel to as some carers need to travel far distances,” she added.

“This is a huge amount of the income a carer receives, especially if their sole income is a mere £62 per week of Carer’s Allowance.”

For this reason, MacDonald said, many carers have told her they feel that the “companion card is not enough” because it becomes “useless” when the carer is travelling alone.

“It’s so important for us, as young carers, as so many are struggling to make ends meet because of the lack of money they get from their Carer’s Allowance.” Lauren Baigrie MSYP

MacDonald said that it is also “massively important” for carers’ mental health for them to be able to get out and about, including to attend support groups and meet with friends.

Carers Trust found that, across the UK, 45 per cent of young adult carers said they have mental health problems and 68.8 per cent of older carers say that being a carer has negatively impacted on their mental health.

“Is concessionary or discounted travel really too much to ask for when carers save the government £132bn per year?” MacDonald asked, referring to a figure identified in research by Carers UK and the University of Sheffield in 2015 into the value of unpaid carers in the UK. The report estimated that this amounted to the cost of a “second NHS”.

A motion inspired by MacDonald’s petition was supported by 96 per cent of MSYPs last month, after young carers Lauren Baigrie and Amy Barbour put it forward to the members.

Speaking to CommonSpace, Baigrie said: “I’m glad that MSYPs not only highlighted but backed the importance of free travel for carers by voting for the motion. It’s so important for us, as young carers, as so many are struggling to make ends meet because of the lack of money they get from their Carer’s Allowance, in addition to the rising costs of transport.

“Carers in Scotland use public transport for so many things, including going to appointments with their cared-for person, picking up medication, and doing the weekly shop.

“Those who also balance their caring commitments with education also rely heavily on public transport, which is why it’s so important to highlight this. Tackling this issue will go some way in helping battle social exclusion, as well as providing support for those in further and higher education.”

“Following a pilot, free bus travel will be made available to recipients of the Young Carer Grant from 2020/21.” Transport Scotland spokesperson

The SYP’s new campaign on young people’s rights, Right Here, Right Now, is calling for decision-makers to take a rights-based approach to their work, as well as empowering young people to defend those rights. Concessionary travel for young carers will be one of the issues within this which the members will be raising with their MSPs.

At present, CommonSpace understands that the Scottish Government has confirmed to the Public Petitions Committee that it does not intend to extend the National Concessionary Travel Scheme to all carers, estimating that the cost of doing so would be a little under £100m.

A spokesperson for Transport Scotland, the Scottish Government agency responsible for transport, said: “At present all carers aged 60 and over are automatically eligible for free bus travel under the scheme.

“In addition, young carers aged between 16 – 18 are eligible for the National Concessionary Travel Scheme for Young People, which offers one-third off bus travel and most rail journeys in Scotland and a 50 per cent discount on rail season tickets.

“In addition, the Scottish Government will be introducing the Young Carer Grant from Autumn 2019. The grant will be awarded to young carers aged 16 and 17, and if still at school 18, who do at least 16 hours of caring a week, but do not qualify for Carer’s Allowance.

“Following a pilot, free bus travel will be made available to recipients of the Young Carer Grant from 2020/21.”