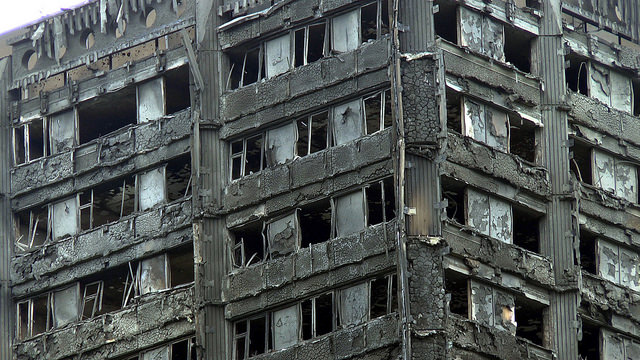 JUST last month, tens of thousands of British Airways passengers were left stranded at Gatwick and Heathrow Airports following an IT crash and it became headline news for the next two days.

Facing massive compensation bills, BA booked thousands of passengers scheduled to travel overnight into hotels with some charging extortionate prices of between £1,000 and £2,500 for a bed, according to newspaper reports.

Now, compare their treatment with that of the victims of the Grenfell Tower massacre and you can see the attitude towards the poor and vulnerable in Britain today is a long distance from the reaction towards stranded airline passengers.

The BA passengers, like the residents, were thrust into a situation through no fault of their own but, let’s face it, most airline users are from the middle classes upwards.

As chaotic as the scenes were in Gatwick and Heathrow, the situation was contained and resolved within 48 hours and yet, at the richest borough in Britain, Kensington and Chelsea Council, they are still struggling to deal with the Grenfell tenants a week on.

Be in no doubt that, without the media glare, those tenants would be sofa surfing by now or be offered council homes in Northampton, Rochdale or Skegness … that is what’s on offer to the poor and vulnerable on the waiting lists in Labour’s Newham Council in East London, where poverty goes hand in hand with hardship.

Angry and grieving victims of the fire are coming forward now to say how they were given a £10 note and a hotel room for the night without any assurances about what would happen in the following days. Seriously folks, a tenner!?

Interviewed by Robert Peston on Sunday, Labour leader Jeremy Corbyn pointed out: “Every day at Heathrow, planes get delayed, hundreds of people get stranded … and hotels are found for them immediately, they are sorted out,” adding that the 400 made homeless in the Grenfell inferno have still not got “somewhere decent or safe and secure to stay”.

Corbyn then defended his call for empty flats bought as an investment to be requisitioned to give people made homeless by the fire a place to stay.

Actually, the Queen has plenty of homes and so-called grace and favour flats in central London lying empty so why not hand over the keys if she really empathises with the subjects she visited with her grandson last week.

Or if a Royal solution doesn’t amuse, how about utilising some of London’s green spaces like Hyde Park or Grosvenor Square and set up mobile homes until all the residents can be rehoused or returned to a renovated and repaired Grenfell Tower?

I’m quite sure the fabulously rich in Knightsbridge, Mayfair and Kensington would spur the council into rapid action to avoid such ‘blots on the landscape’ and let’s face it, when the upper classes pump up the volume to complain politicians tend to listen.

Meanwhile, Professor Miles Glendinning, a historian and architectural conservationist at the University of Edinburgh, has urged politicians to restrain themselves when calling for all tower blocks to be demolished. He said the problem is not the tower blocks but blamed the “tinkering” of structures with the installation of unsafe cladding schemes.

He called for an immediate moratorium on any cladding schemes and the installation of sprinkler systems. “There’s no need to demolish tower blocks – they were built safely before being tinkered with for aesthetic qualities,” he told Sky News on Sunday.

Now, activists are calling for a “day of rage” to coincide with the Queen’s Speech as anger increases over the blaze and the local council’s reaction to it along with Theresa May’s decision not to meet local residents during a site visit last week.

Led by the Movement for Justice By Any Means Necessary – formed in 1995 by a number of Marxist groups – campaigners are urging protesters to flood the streets by “walking out of school, taking the day off, calling in sick and striking”.

Organisers claim the event will “shut down London” as anger gathers momentum across the capital.

Flyers promoting the event were handed out in central London over the weekend and a Facebook group has been set up for the event on 21 June. Protesters have been told to meet at Shepherds Bush Green at 1pm before marching en masse nearly five miles to the Houses of Parliament.

News of the march has prompted Tories to call on people not to politicise the tragedy but as they are learning, what happened last week at Grenfell Tower is inherently political because you cannot separate social housing from politics.