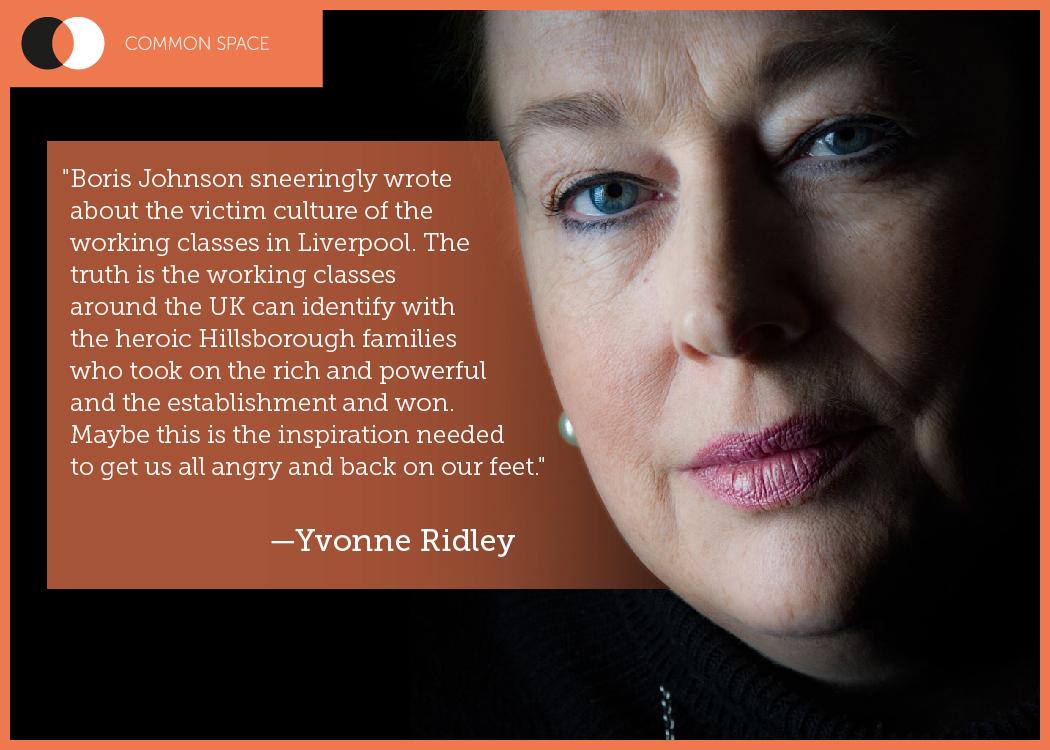 MARGARET THATCHER’S legacy was Tony Blair and Tony Blair’s legacy is today’s Tory party – the pair of them nurtured the greed-is-good culture and while protecting the rich, they created the filthy rich.

Both of them helped safeguard and create powerful people sitting in powerful places and so we now we have a situation where these people, often living overseas, are plundering the wealth and resources of the UK while stamping on the working classes.

In the meantime, if the so-called little people get too uppity they’re slapped back down … this works well most of the time as the downtrodden from former steel, shipbuilding and coal communities can testify.

Thatcher’s lot could not have reckoned on the dogged tenacity and staying power of the people of Liverpool.

But Thatcher’s lot could not have reckoned on the dogged tenacity and staying power of the people of Liverpool. Now, after a 27-year campaign by victims’ families, the behaviour of Liverpool fans was exonerated as an inquest jury found they did not contribute in any way, shape or form to the horrors unfolding at the turnstiles at the Leppings Lane end of Sheffield Wednesday’s ground on 15 April 1989.

There is a wonderfully gritty cartoon of Thatcher standing on a football pitch sweeping the dead under a grass green carpet, but cover up or not, it didn’t work and the Justice For the 96 Campaign has finally been vindicated. On the downside, it has taken 27 years and now the Crown Prosecution Service in England, notoriously bad at delivery quick decisions, will deliberate and dither on whether or not those found negligent should be charged.

The cover up didn’t just extend to incompetent policing: there were other dark forces at play and even as late as October 2004 the demonizing narrative continued. Boris Johnson wrote a damning article in which he described “drunken fans at the back of the crowd who mindlessly tried to fight their way into the ground that Saturday afternoon. The police became a convenient scapegoat, and the Sun newspaper a whipping-boy for daring, albeit, in a tasteless fashion, to hint at the wider causes of the incident…”

The Sun’s front page on 19 April 1989 – four days after the Hillsborough disaster – splashed with claims from anonymous police officers which are now known to be untrue. Wednesday’s Metro front page following the inquest verdicts highlights how important the Sun’s role was in spreading the false version of events.

The Old Etonian also attacked the people of Merseyside in general in his Spectator article writing about their “peculiar, and deeply unattractive, psyche” adding: “They see themselves whenever possible as victims, and resent their victim status; yet at the same time they wallow in it. Part of this flawed psychological state is that they cannot accept that they might have made any contribution to their misfortunes, but seek rather to blame someone else for it…”

Like it or not, this is how the Tories – and those Tory Lites still clinging on in the Labour party benches in Westminster and Holyrood – see us, ordinary ‘little people’.

And now we have 11,000 shopworkers at BHS who are worried about their jobs and their future as the administrators launch the desperate search to find a new buyer for the ailing high street chain.

Suddenly that PS1 deal by the Blair knight, Sir Philip Green, doesn’t seem such a bargain after all. In fact, the retail tycoon is facing calls to give up his knighthood if he does not pay back dividends received from BHS when he owned the stores chain.

The cover up didn’t just extend to incompetent policing: there were other dark forces at play and even as late as October 2004 the demonizing narrative continued.

The BHS pension scheme has a deficit of PS571m and pensions select committee chair Frank Field says he plans to call Green in to parliament for questions. While the Pension Protection Fund, a government-sponsored safety net for collapsed pension schemes, could solve the problem it is rapidly being viewed by some as a dumping ground for the filthy rich to offload their liabilities.

Set up around 10 years ago, it should provide cover for 11 million workers with final salary-style pension schemes, and has already bailed out 800 failed schemes with 222,000 members.

The cost to the taxpayer to date is around PS1.8bn and it remains to be seen if we humble souls will have to cough up PS571m for the hole in the BHS pension scheme. The good news is that PPF did force some companies to contribute PS574m to the rescue kitty last year.

While many of us plebs would like to see the Baron Hardacres of this world lose the shirts off their backs and their liberty, some of the filthy rich are astoundingly furious at having to contribute to PPF at all.

In 2014, after a six-year legal battle, the pensions regulator won a PS184m case involving nearly 2,500 former Lehamn Brothers bankers based in the UK. But a legal battle with ITV over the PS62m deficit of Boxclever, the TV rental firm, continues 13 years after the company went bust.

Green and Dominic Chappell, who bought BHS from Green for PS1 in March 2015, will now face questions about their management of BHS. Meanwhile, the Guardian newspaper has calculated that Green and his family raked in PS586m in dividends, rental payments and interest on loans during their 15-year ownership of the retail fashion outlet.

It took 27 years to get justice for the 96 and if that inquest has taught us one thing, it’s that the establishment does not look that powerful when we get up off our knees and fight back.

Labour MP John Mann, of the Treasury select committee, is already calling on Green to cough up the PS400m of dividends that were paid out of BHS, or give up his knighthood. Realistically, we know that Green will do neither and any inquiries and investigations will take years and years while the rich get richer and the BHS shopworkers are jettisoned into a future of unknowns.

I can also confidently predict that Green will not lose one night’s sleep over the plight of the little people whether he’s at his luxury family home in Monaco or sailing around the Med in his new yacht Lionheart.

Boris Johnson sneeringly wrote about the victim culture of the working classes in Liverpool. The truth is the working classes around the UK can identify with the heroic Hillsborough families who took on the rich and powerful and the establishment and won. Maybe this is the inspiration needed to get us all angry and back on our feet.

It took 27 years to get justice for the 96 and if that inquest has taught us one thing, it’s that the establishment does not look that powerful when we get up off our knees and fight back.